From Wikipedia, the free encyclopedia
Oṃ maṇi padme hūṃ[1] (Sanskrit: ओं मणिपद्मे हूं, IPA: [õːː məɳipəd̪meː ɦũː]) is the six-syllabled Sanskrit mantra particularly associated with the four-armed Shadakshari form of Avalokiteshvara (Tibetan སྤྱན་རས་གཟིགས་(Chenrezig), Chinese 觀音(Guanyin), Japanese 観音(かんのん, Kannon), the bodhisattva of compassion. Mani means "jewel" or "bead" and Padma means "the lotus flower", the Buddhist sacred flower.
It is commonly carved onto rocks or written on paper which is inserted into prayer wheels. When an individual spins the wheel, it is said that the effect is the same as reciting the mantra as many times as it is duplicated within the wheel.

In English the mantra is variously transliterated, depending on the schools of Buddhism as well as individual teachers.
Most authorities consider maṇipadme to be one compound word rather than two simple words.[2] Sanskrit writing does not have capital letters leaving capitalisation of transliterated mantras varying irrationally from all caps, to initial caps, to no caps. All caps is typical of older scholarly works, and in Tibetan Sadhana texts.

The first known description of the mantra appears in the Karandavyuha Sutra (Chinese: 佛說大乘莊嚴寶王經 (Taisho Tripitaka 1050);[3] English: Buddha speaks Mahayana Sublime Treasure King Sutra), which is part of certain Mahayana canons such as the Tibetan. In this sutra, Shakyamuni Buddha states, "This is the most beneficial mantra. Even I made this aspiration to all the million Buddhas and subsequently received this teaching from Buddha Amitabha."[4]

Mantras may be interpreted by practitioners in many ways, or even as mere sequences of sound whose effects lie beyond strict meaning.
The middle part of the mantra, maṇipadme, is often interpreted as "jewel in the lotus," Sanskrit maṇí "jewel, gem, cintamani" and the locative of padma "lotus", but according to Donald Lopez it is much more likely that maṇipadme is in fact a vocative, not a locative, addressing a bodhisattva called maṇipadma, "Jewel-Lotus"- an alternate epithet of the bodhisattva Avalokitesvara.[5] It is preceded by the oṃ syllable and followed by the hūṃ syllable, both interjections without linguistic meaning.
Another suggested translation is thus: Om purifies bliss and pride (realm of the gods); Ma purifies jealousy and need for entertainment (realm of the jealous gods); Ni purifies passion and desire (human realm); Pad purifies ignorance and prejudice (animal realm); Me purifies greed and possessiveness (realm of the hungry ghosts); Hum purifies aggression and hatred (hell realm).
Lopez also notes that the majority of Tibetan Buddhist texts have regarded the translation of the mantra as secondary, focusing instead on the correspondence of the six syllables of the mantra to various other groupings of six in the Buddhist tradition.[6] For example, in the Chenrezig Sadhana, Tsangsar Tulku Rinpoche expands upon the mantra's meaning, taking its six syllables to represent the purification of the six realms of existence:[7] 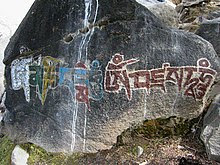 "om mani padme hūṃ", written in Tibetan script on a rock outside the Potala Palace in Tibet

"The path is indicated by the next four syllables. Mani, meaning jewel, symbolizes the factors of method: (the) altruistic intention to become enlightened, compassion, and love.[...]"

"Purity must be achieved by an indivisible unity of method and wisdom, symbolized by the final syllable hum, which indicates indivisibility[...]"

Thoughts to be had whilst chanting transcribed in simplification keeping essence:
Being and non-beings proliferate loving compassion and indivisible intelligent equanimity; Om Mani Padme Hum.
That is the natural ubiquitous pervasive force of consciousness. These frequencies are in the Sanskrit tongue, act as a harmonic sound resonance against blocking energy, or sleeping energy. Plants reflect this action as well because of the phonetic strength of vibration that is stimulated by natural pronunciation.

Carved stone tablets, each with the inscription "Om Mani Padme Hum" along the paths of Zangskar

"So in this way recitation of the mantra helps achieve perfection in the six practices from generosity to wisdom. The path of these six perfections is the path walked by all the Buddhas of the three times. What could then be more meaningful than to say the mantra and accomplish the six perfections?"

—Dilgo Khyentse Rinpoche, Heart Treasure of the Enlightened Ones[9]

"The meaning of this mantra is: with 'OM' we are calling Avalokiteshvara, 'MANI' means the precious jewel of enlightenment, 'PADME' means liberation and 'HUM' means bestow. Together, the meaning is: 'O Avalokiteshvara, please bestow the precious jewel of enlightenment to liberate all living beings'. Through the recitation of this mantra we train in the compassionate mind of bodhichitta."[10]

"I think you are acquainted with that particular incantation om mani padme hum? Now listen to these three sounds of om (pronounced aum): a, u, ma. The first sound, a, represents creation; the second sound, u, represents retention [or preservation]; the third sound, ma, represents destruction. For each and every action there is a supporting sound in this universe. That supporting sound is called the acoustic root of that action. So then for all the universe, the acoustic side is aum – A-U-M. It is the collective sound of all the work of the universe, so within the scope of aum come all the activities of the world. Aum represents the worldly expression of Parama Puruśa. The sleeping divinity in the human body lies in the lowermost portion of your backbone. That lowermost bone is called kula in Sanskrit. That sleeping divinity is called kulakuńd́alinii. That psychic spot is called in old Sanskrit mańipadma, or mahámańipadma, or munipadmá or mahámunipadmá. (Mahámuni is a name of Lord Buddha. Mahámuni means “great sage”.) So, “Using aum, I remember Parama Puruśa; and mańipadma is the seat of that coiled serpentine, that sleeping divinity, in the human body. I remember that entity also". Each and every man has certain weaknesses; one is always moving after name, one is always moving after fame, or after money, always money so many weaknesses. One wants to fight against internal and external enemies. You have enemies in your mind, you have enemies outside your mind. There are so many depraving forces, they are all your enemies. When you want to fight against the mind, a particular flow is created in your mind. The acoustic root of that flow is hummm. The hum sound is created. The hum sound is the acoustic root of fight. When you are to raise your sleeping divinity, elevate the sleeping divinity from the lowermost bone of your body, the mańipadma, the lowermost seat, you will also fight against so many adversities and pass through the entire cord, the entire backbone of your body. After so many fights, you will be able to elevate the sleeping divinity in your body to the status, or to the stance, of Parama Puruśa. Now, just to raise the coiled serpentine, your sleeping divinity, you have to fight against many fetters, so many fetters of animality, so there is a fight, and this should be represented by the sound hum. So the old Maháyániis used this incantation, Oṋḿ mańipadme hum. Now it is clear." Shrii Shrii Anandamurti, Excerpted from the discourse "Acoustic Roots" Published in: Ánanda Vacanámrtam Part 14, Bábá in Taiwan, and Discourses on Tantra Volume One [a compilation]. Ananda Marga Publications.

The mantra: Om Mani Peme Hum Hri
As Bucknell et al (1986, p. 15.) say, the complete Avalokiteshvara Mantra includes a final hrīḥ (Sanskrit: ह्रीः, IPA: [ɦriːh]), which is iconographically depicted in the central space of the syllabic mandala as seen in the ceiling decoration of the Potala Palace.[11] The hrīḥ is not always vocalized audibly and may be resonated "internally" or "secretly" through intentionality.

en.wikipedia.org/wiki/Om_mani_padme_hum
Wikipedia
Oṃ maṇi padme hūṃ (Sanskrit: ओं मणिपद्मे हूं, IPA: [õːː ... In this sutra, Shakyamuni Buddha states, "This is the most beneficial mantra. Even I made ...
‎Transliterations - ‎Meaning - ‎Introduction to Tibetan Buddhism - ‎In popular culture
Posted by intuitivefred888 at 7:42 AM