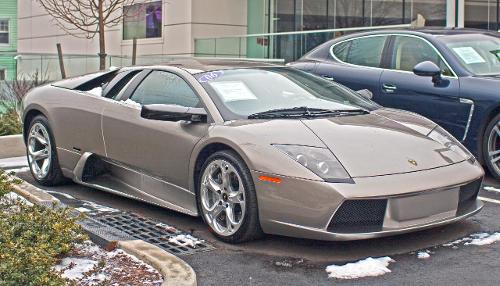 Question: I was thinking of giving my son my used Lamborghini as a first car. Is it a good idea? It is my used 2006 Murcielago from my collection.
Answer: If my dad had offered me a Lamborghini Murciélago as a first car I’d have been the happiest kid ever. I’d then have been the most injured kid ever followed by the most arrested.
The model in question boasts 572 horsepower from its beastly V-12. It’ll hit 62 mph from a standstill in 3.8 seconds, while topping out at 206 mph. And if that’s not enough, all of this performance is routed through a six-speed manual transmission.
To the enthusiast, this seems like the ultimate combination, but to the fetus behind the wheel, it’s a deathtrap — for both the kid and for other road users. A 16-19 year old is three times more likely to be involved in an accident than you or me. In 2011 alone, 2,650 teens were killed behind the wheel, and a further 292,000 were taken to the ER and treated for injuries — imagine how vastly the odds of becoming one of those statistics increases in a supercar such as this.
But let’s ignore the danger side of things for one minute: Another reason this may not be the smartest of ideas (yes, this question was actually posted to Quora) is that the cost to insure the car will be catastrophic — although I suppose if you have a “collection” that includes a Murciélago, this may not be the biggest of concerns. However performance cars such as these do need a lot of upkeep. They weren’t designed to be daily drivers, and after roughly ten years of ownership, odds are it won’t be the most dependable of school runners.
Then there’s the tickets he will likely amass. Imagine the temptation — his buddy in the passenger seat, your teenage son with 572 horsepower under his right foot… Lambos, all-wheel-drive or not, aren’t known to be — how do I put this? — docile.
And I haven’t even got to the phycological damages yet.
Try to envisage a teen’s presumed entitlement after being gifted a Lamborghini as a first car, chuckling at the so-called rich kids in their Mustang GTs (who, by the way, will also end up injured and arrested). A story broke yesterday about a kid who had a Ferrari 458 Italia bought for him, but shortly after receiving it, he got bored and wanted the newer, faster 458 Speciale. To cover the costs, after daddy had said no, he torched the thing in an effort to scam the insurance company. It didn’t work, and yes, he was arrested.
Needless to say, this really is a horrible idea. My advice: Stick with a car that’s sensible, practical — and above all else — safe. If you’ve got the cash, load it with all the safety tech available, like lane assist and emergency collision braking. Teach him the value of money so he can aspire to one day own his own Lamborghini, achieved through hard work and dedication.
Trust me, you’ll both appreciate it in the long run.

We’re scouring the Internet to uncover interesting questions that people have posted looking for advice from the unwashed masses. We will contact experts to give you well-researched, professional advice. You can also submit questions to autos_qotd@yahoo.com.
end quote from:

Let's look at the many reasons why this is perhaps not the smartest of ideas...
Yahoo Autos
My answer of course would be "No!"
The answer is easy. "Do you want your son to be alive a couple of years from now? If so, buy him something less likely to kill him."
If a car can drive at 160 to 200 miles per hour, how long do you think he will stay alive? Also, if this is his first car, "How can he top this in his life?" What can he have to look forward to in life?"
So, my answer would be "No."

Email ThisBlogThis!Share to TwitterShare to FacebookShare to Pinterest
Labels: Should I Give My Son A Used Lamborghini As His First Car?