The road to Mosul


Advance on ISIS: The road to Mosul

Watch Arwa Damon's reports from Iraq live on CNNGo.
Nineveh province, Iraq (CNN)Captain T's sniper rifle hangs out of the truck window as he hums along to "The Warrior Song" blaring forth from his iPhone.
It's a tune that reminds him of one of his American trainers, back when the U.S. military was first rebuilding Iraq's security forces, after the fall of Saddam Hussein. 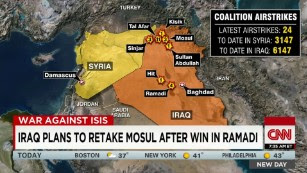 Iraq plans to retake Mosul after win in Ramadi 05:12
It's been almost two years since Captain T saw his family, when ISIS took over their village in Nineveh province.
"Sometimes I am just a ten minute drive away from them, but I can't see them," he says. "With the help of God, I will get them free soon, very soon."
The captain, in his mid 30s, asked to go by his rank and first initial out of fear for his family's safety. He keeps his face covered in a black mask; if ISIS found out he was with the army, his family would pay the price.

The convoy of vehicles we're in bump along the dirt road that cuts across agricultural fields, past defensive berms that snake through farmland and artillery positions leading to the Iraqi army's new frontline with ISIS. 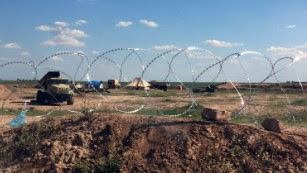 Iraqi troops have retaken villages in Nineveh province from ISIS, but their hold on the area is tenuous.
Captain T signals a halt and jumps out to check an area where a roadside bomb went off that very morning. A boot protrudes from the dirt, and a helmet lies nearby. No one was killed in the explosion, but several people were wounded.
"ISIS comes in the middle of the night and plants bombs along the road," one of the officers explains.
In recent weeks the Iraqi army has managed to recapture a handful of villages from ISIS in Nineveh province, to the south of Mosul, in what is being described as the first phase of the operation to liberate Iraq's second largest city.
Mosul fell to ISIS after the Iraqi Army abandoned their positions and fled in the summer of 2014. 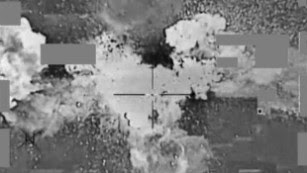 U.S. airstrike on ISIS cash depot sends money into air 00:47
The Iraqi army's 15th Infantry Division is the first unit to be back on the ground in Nineveh since then. The unit's personnel are mostly drawn from the province itself. They have been reorganized and retrained by the coalition and are under new command.
The advance so far is being hailed a success, but the gains are small and the troops' hold on the area is tenuous.
The Iraqi army's resolve is regularly being put to the test: Will they stand and fight or flee once again? U.S. support is key to that question. 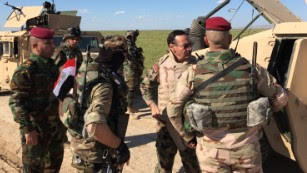 Major General Najim al-Jobori (wearing sun glasses) puts on body armor as his team heads for the front line.
"I want to see more support from the Americans and the coalition," says Major General Najim al-Jobori, commander of Nineveh operations and a native of Mosul. "My troops are precious to me and the more support we have, the more of their blood we save."
"The most important thing is to see ongoing U.S. backing with the airstrikes, advisers and logistical support," he adds. "It is not an urgent thing for us right now, [to see] American combat boots on the ground. We can liberate our own lands."

Further along the road, we arrive in the village of Kharabardan, where ISIS militants managed to sneak into a home on the outskirts overnight, in an attack that included suicide bombers and dozens of fighters. 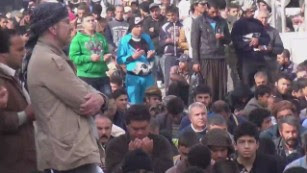 Blindsided: Behind enemy lines with ISIS 02:26
In response, the Iraqi troops called in a coalition airstrike that leveled the building and swung the battle in their favor.
Buoyed by their success they take us to see the bodies of ISIS fighters scattered on the hillside. Bursts of gunfire and artillery explosions going off nearby are a constant reminder that ISIS is always probing for vulnerabilities and weaknesses.
"ISIS, especially now we are on the perimeter of what is their so called caliphate, is using waves of suicide bombers backed by fighters," says al-Jobori.
"For the moment we are focused on moving closer to the Tigris River and waiting for the other fronts where units are fighting to also push up towards Mosul."

While we were there, Captain T called his family, promising that the Iraqi army would not be much longer in coming and telling them not to give up hope. 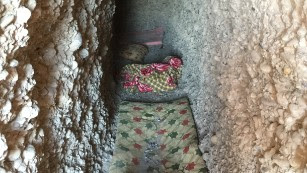 ISIS militants dug tunnels beneath a hill in Kharbardan in which to shelter from coalition airstrikes.
But ISIS has had two years to fortify its defenses, both in Mosul and here in the wider province, in hopes of fending off any attempt to retake the region.
The Iraqi forces offer us a sobering glimpse of what their enemies have achieved, escorting us through a small entrance carved into the hillside. It leads to a complex underground labyrinth of passages that veer off in multiple directions. Mattresses and blankets on the floor offer clues to the cavern's role: sleeping quarters for 8-12 fighters.
The soldier guiding us through the subterranean maze whispers: "If this is what they have here, only God knows what they have in Mosul."
Posted by intuitivefred888 at 9:52 PM

Email ThisBlogThis!Share to TwitterShare to FacebookShare to Pinterest
Labels: Advance on ISIS