begin quote from:
Posted by intuitivefred888 at 7:13 PM No comments:

Posted by intuitivefred888 at 7:11 PM No comments:

Email ThisBlogThis!Share to TwitterShare to FacebookShare to Pinterest
Labels: Changes at national parks

Email ThisBlogThis!Share to TwitterShare to FacebookShare to Pinterest
Labels: plastic made from plants 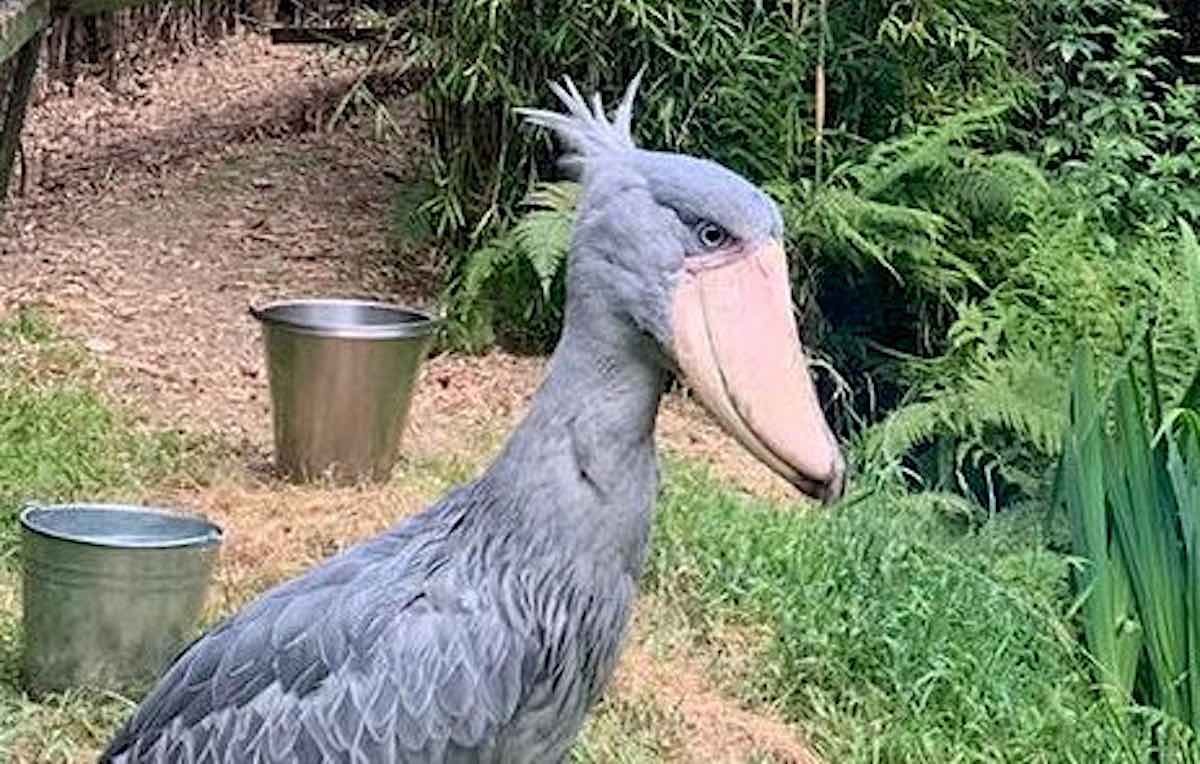 An extremely rare ‘dinosaur’ bird, the only one of its kind in the UK, is patiently awaiting a new mate while the Exmoor Zoo sets out to help save the shoebill species.

She recently arrived from the Pairi Daiza Zoo in Belgium where she was a newborn star in their international breeding program.

The unique-looking bird is one of only eleven shoebills that are currently in captivity around the world.

One of the reasons the species is under threat is because the birds are monogamous and normally rear only one chick. Also, climate change is affecting the population—with around 5,000 left in the wild.

Meanwhile, the 14-year-old bird called Abou has been greeting her keepers with displays of bowing and spreading her wings—a common courtship ritual.

But she’ll have to wait until the breeding program produces a male, so the pair can be matched and produce much-hoped-for offspring.

Exmoor Zoo Curator Derek Gibson, is beyond delighted to be in the same vicinity as one of these birds.

“She is magnificent to behold…and if we can keep her well and she thrives – when a male does become available, then he will also come and join us at Exmoor Zoo.”

Also known as whale heads, shoebills have one of the largest and most unusual bills in the birding kingdom, and live in the marsh lands of East Africa, where they hunt fish and small invertebrates.

Derek says he has been waiting 40 years for the ‘amazing moment’ when he finally got to see a shoebill ‘in the feather’.

“In reality, I’ve never been in a position to see these amazing birds in the wild.”

“They live in countries in central and eastern Africa—like Uganda, Zambia, Tanzania—which are prone to extended periods of doubt, so there is a huge intensity on animals and people who are having to compete for the same environment.”

“These birds do have their work cut out for them, which is why it is so important to offer Abou a home and put ourselves forwards to try and do our bit.”

CHECK OUT: Amazing Quarter-Million Monarchs in 2021, Up From Just 2,000 the Year Before in Migration Count

“They have a life expectancy of 35 years—so our Abou is still a teenager, and we love her very much.”

Posted by intuitivefred888 at 7:08 PM No comments:

Email ThisBlogThis!Share to TwitterShare to FacebookShare to Pinterest
Labels: "Biochar"

Down in the polls and facing losing her seat in Congress over her opposition to Donald Trump and membership of the House January 6 committee, Liz Cheney came out swinging in a Republican debate in Wyoming.

“The truth matters,” she said in Sheridan on Thursday night, targeting Harriet Hageman, the candidate endorsed by Trump, and challenging her to say the 2020 election was not stolen.

Hageman did not do so.

Cheney, Hageman and three other candidates will contest the primary on 16 August. Hageman leads by about 30 points in polls.

Cheney, a strict conservative and the daughter of the former congressman, defense secretary and vice-president Dick Cheney, has been seeking to convince Democrats to switch registration and back her.

On the debate stage, Cheney said: “I’m frankly stunned that one of my opponents on the stage who is a member of the Wyoming bar, who has sworn an oath as many of us on this stage have to the constitution, would be in a position where she is suggesting that somehow what happened on January 6 was justified or that somehow … the people have the right to ignore the rulings of the courts.”

She added: “I’d be interested to know whether or not my opponent, Ms Hageman, is willing to say here tonight that the election was not stolen. She knows it’s not stolen.

“The truth matters. And the claims that Ms Hageman is making about the 2020 election are the same claims for which the president’s lead lawyer, Rudy Giuliani, was disbarred.”

Giuliani, a former mayor of New York City, was suspended from practicing law in New York and Washington DC, over his false claims about the 2020 election.

Hageman said there were “serious concerns” about the 2020 election and said Republicans were being targeted for “exercising their first amendment rights”.

She also cited a film, 2000 Mules, which claims to prove Democratic voter fraud but which has been debunked.

Cheney also defended and heralded the work of the January 6 committee, which has held a series of bombshell public hearings.

Trump’s former campaign manager, Bill Stepien – who at a January 6 hearing claimed to have been part of “Team Normal” as Trump tried to overturn the 2020 election – signed on to work for Hageman in Wyoming.

Hageman said the January 6 committee was “focusing on something that happened 18 months ago. They’re not focused on things that are important to the people of Wyoming.”

Cheney said: “There’s a real tragedy that’s occurring and the tragedy is there are politicians in this country, beginning with Donald Trump, who have lied to the American people. People have been betrayed. He has consistently said the election is stolen when it wasn’t.

“We are now embracing a cult of personality. I won’t be part of that, and I will always stand for my oath and stand for the truth.”