A Dweller on Two Planets:Written in 1886

Posted by intuitivefred888 at 8:46 PM No comments:

Email ThisBlogThis!Share to TwitterShare to FacebookShare to Pinterest
Labels: A Dweller on Two Planets:Written in 1886

There is an article in the latest Time Magazine called "Missing in Action" which is why the World Health Organization failed to stop Ebola.

However, I think it wasn't just WHO I think it was the whole world failing to notice because of Putin, Ukraine, Crimea, Assad, ISIS etc. etc. etc. So, I don't think the whole blame can be put on WHO either. I think the whole world was distracted. Also, if you study the history of previous Ebola outbreaks they were quite small. This time it is possible someone or some government got involved and Genetically mutated the virus to kill thousands to millions which it might be on it's way to right now wherever it goes to that doesn't have a medical science infrastructure in place or doesn't have compulsory scientific education like in the U.S.

So, if it was Genetically engineered as a depopulation device by whoever, whatever WHO might have done wouldn't have worked anyway very likely. We likely would have the same outcome as now. Also, if it were genetically engineered by an individual, company or nation they likely engineered it to do what it is doing and eventually go airborne within a year or two.

You basically have the first years progression of registered cases so far. However, many many more died than were registered here. These are the only ones they registered as cases and deaths.

These statistics are from the "Beyond the Stars" issue of Time magazine November 10th 2014.

If I take the July figures and compare them to the October 2014 figures there are approximately 10 times as many cases 4 months later. If this progression holds true every 4 months the number of cases will be 10 times what they were 4 months before. So, given this progression we should be expecting 130,000 cases 4 months from now in January 2015. However, technically this could be mitigated by medical teams and military medical teams being involved from around the world also.

Let me continue this progression so you fully see the problem here.

Next January 2016 if this progression holds we have now 1 billion 300 million cases. By the following April we have more cases than everyone presently alive on earth.

Of course that isn't going to happen. But, the 1,300,000,000 might actually happen by a year from January given present progressions of cases if enough isn't done by nations in the next 4 months to prevent it's spread.

And like AIDS we might not be able to stop it spreading. Or it could  go airborne in which case almost everyone on earth eventually will be exposed to it sort of like the common cold or flu. In that case about 1/2 of everyone on earth could potentially get Ebola and reduce world populations by 1/3 to 1/2 from what they presently are.

Posted by intuitivefred888 at 7:54 PM No comments:

Where I live on the northern California coast this is the biggest rain storm to hit us since about March. So, we have mostly been experiencing heavy drought conditions ever since then. Today it was raining so hard my gutters and downspouts were overflowing on my house here near the beach. So, I also had to go out because flagstone pathways around my house were becoming rivers so I had to get some sand out to reroute the rivers of water away from my house like one would a small rivulet or stream in flooding conditions. So, it's from Famine to feast with this deluge and so I hope all animals and people are going to be okay because it is coming down just so intensely now in this area and to the northeast of us as it heads  up through Santa Rosa on up to Mt. Shasta and points further north and east of us.

However, I also have a French drain several feet deep so we don't get water under the house. It reroutes underground water away to the south around our house towards the South.

Posted by intuitivefred888 at 3:24 PM No comments:

Virgin Galactic spaceship crashes, killing 1 of the pilots: one lived 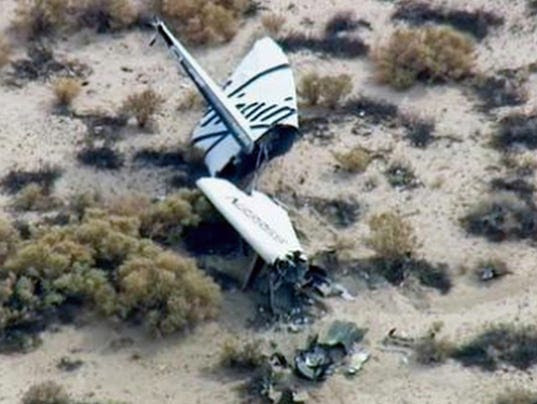 (Photo: KABC TV via AP)
3288 CONNECT 530 TWEET 41 LINKEDIN 48 COMMENTEMAILMORE
In the second commercial space disaster this week, Virgin Galactic's tourism rocketship exploded and crashed Friday after a malfunction during a test flight over the Mojave Desert, killing one pilot and seriously injuring the other.
A witness said the SpaceShipTwo blew up shortly after its engine fired when it was dropped from the WhiteKnight aircraft that carried it aloft, the Associated Press reported. Wreckage was scattered over a wide area near Cantil, in Kern County.
The pilot ejected and was taken to a hospital, but the co-pilot suffered fatal injuries, the Kern County Sheriff's Office reported. Their identities were not immediately released.
Virgin Galactic, owned by British billionaire Richard Branson, said the craft "suffered a serious anomaly resulting in the loss of the vehicle." The malfunction was not immediately identified.
The test flight was conducted by Scaled Composites, Virgin Galactic's partner. The weather was clear, and winds were light at time of the crash, according to AccuWeather meteorologists.

<!--iframe-->
Friday's flight was the 35th time SpaceShipTwo had been released by the mothership and was flying independently.
Branson has been developing the suborbital SpaceShipTwo at Mojave Air and Space Port, northeast of Los Angeles.
He said on Twitter he was "flying to Mojave immediately to be with the team."
"Thoughts with all @virgingalactic & Scaled, thanks for all your messages of support," he tweeted.

AMERICA'S MARKETS
SpaceShipTwo crash costs Virgin Galactic
He told USA TODAY in 2011 that he envisioned Virgin Galactic expanding from suborbital to orbital travel and even flights between continents that could be done in a fraction of the time they take by airplane.
Made of carbon composites, SpaceShipTwo was about twice a large as its prototype predecessor, SpaceShipOne. It was 60 feet long with a cabin diameter of 90 inches, about the size of a Falcon 900 executive jet without a floor. In addition to two pilots, it was designed to carry six passengers.
"The spaceship can be thought of as an air launched glider with a rocket motor and a couple of extra systems for spaceflight," the company says.
Virgin Galactic is owned by Branson's Virgin Group and Aabar Investments PJS of Abu Dhabi, United Arab Emirates. Seats for future flights cost $250,000, prepaid.
SpaceShipTwo is one of several spacecraft owned by New York-based Virgin Galactic, a unit of privately held Virgin Group. The company also owns the mothership WhiteKnightTwo – which Branson christened Eve, after his mother – and LauncherOne, an orbital launch vehicle.
The loss of SpaceShipTwo comes on the heels of the explosion late Tuesday of an unmanned commercial resupply rocket seconds after liftoff at NASA's facility on the Eastern Shore of Virginia.

An image from video shot by KABC TV in Los Angeles shows wreckage of what is believed to be SpaceShipTwo on Oct. 31 in California's Mojave Desert. The space tourism rocket exploded during a test flight. (Photo: KABC TV via AP)
end quote from:

To get the most information about this I would recommend clicking the word button several lines above this one:

Posted by intuitivefred888 at 2:02 PM No comments:

Email ThisBlogThis!Share to TwitterShare to FacebookShare to Pinterest
Labels: killing 1 of the pilots: one lived, Virgin Galactic spaceship crashes

People in Europe for example, likely would be horrified about this true statement about Americans. This is why Americans, Russians and Chinese people are usually the most ethnocentric in the world.

And it is this same ethnocentrism that gets millions of people killed around the world in World War II and likely in whatever this is going on in Syria, Iraq, Ukraine, Crimea, Lebanon, Libya and whatever mess happens next:

Posted by intuitivefred888 at 1:05 PM No comments:

Email ThisBlogThis!Share to TwitterShare to FacebookShare to Pinterest
Labels: 70% of U.S. Citizens don't have passports: Ethnocentrism

Truth is Stranger than Fiction

I have noticed this about life here on earth. That all the time I have found "Truth is Stranger than Fiction"

Most people like to live in a safe little world with firm boundaries and well defined realities.

However, that isn't the way life is at all.

All the well defined fairy tales we are given through life of ultimate good and ultimate bad is mostly just horse shit.

Most of life is about just trying to survive all the really crazy shit you are going to experience in your life if you walk outside your door and leave wherever you grew up to visit other places and people.

For example, in the Midwest of the U.S. you often can find very white, very nice, and very completely ethnocentric people who don't have a clue about anything outside of where they were born.

This is also true of places like interior Russia, Interior China, etc.

So, in these types of places they just usually don't have a clue about anything outside of their little town or city. And they like it this way.

However, this kind of ethnocentrism is also what creates World Wars.

Because always Truth is way stranger than these people can even begin to deal with any any way, shape or form.

So, this creates world wars when people don't understand each other.

There is nothing inherently wrong with being happily ethnocentric.

Until about 100 million or more people die.

Which is about where we are going as a world right now.
Posted by intuitivefred888 at 7:23 AM No comments:

Email ThisBlogThis!Share to TwitterShare to FacebookShare to Pinterest
Labels: truth is stranger than fiction

This category has the following 5 subcategories, out of 5 total.

The following 99 pages are in this category, out of 99 total. This list may not reflect recent changes (learn more).
Categories:
Hidden categories:

Edit links
Posted by intuitivefred888 at 7:04 AM No comments: