YARNELL, Ariz. (AP) — Gusty, hot winds blew an Arizona blaze out of control Sunday in a forest northwest of Phoenix, overtaking and killing 19 members of an elite fire crew in the deadliest wildfire involving firefighters in the U.S. for at least 30 years.
The ‘‘hotshot’’ firefighters were forced to deploy their emergency fire shelters — tent-like structures meant to shield firefighters from flames and heat — when they were caught near the central Arizona town of Yarnell, state forestry spokesman Art Morrison told The Associated Press.
The fire also destroyed an estimated 200 homes, Morrison said. Dry grass near the communities of Yarnell and Glen Isla fed the fast-moving blaze, which was whipped up by wind and raced through the homes, he said.
The fire still burned late Sunday, with flames lighting up the night sky in the forest above Yarnell, a town of about 700 residents about 85 miles northwest of Phoenix. Most people had evacuated from the town, and no injuries or other deaths were reported.
The fire started after a lightning strike on Friday and spread to at least 2,000 acres on Sunday amid triple-digit temperatures, low humidity and windy conditions.
Prescott Fire Chief Dan Fraijo said that the 19 dead firefighters were a part of the city’s fire department.
‘‘We grieve for the family. We grieve for the department. We grieve for the city,’’ he said at a news conference Sunday evening. ‘‘We’re devastated. We just lost 19 of the finest people you'll ever meet.’’
Hot shot crews are elite firefighters who often hike for miles into the wilderness with chain saws and backpacks filled with heavy gear to build lines of protection between people and fires. They remove brush, trees and anything that might burn in the direction of homes and cities.
The crew killed in the blaze had worked other wildfires in recent weeks in New Mexico and Arizona, Fraijo said.
‘‘By the time they got there, it was moving very quickly,’’ he told the AP of Sunday’s fire.
He added that the firefighters had to deploy the emergency shelters when ‘‘something drastic’’ occurred.
‘‘One of the last fail safe methods that a firefighter can do under those conditions is literally to dig as much as they can down and cover themselves with a protective — kinda looks like a foil type — fire-resistant material — with the desire, the hope at least, is that the fire will burn over the top of them and they can survive it,’’ Fraijo said.
‘‘Under certain conditions there’s usually only sometimes a 50 percent chance that they survive,’’ he said. ‘‘It’s an extreme measure that’s taken under the absolute worst conditions.’’
The National Fire Protection Association had previously listed the deadliest wildland fire involving firefighters as the 1994 Storm King Fire near Glenwood Springs, Colo., which killed 14 firefighters who were overtaken by a sudden explosion of flames.
U.S. wildfire disasters date back more than two centuries and include tragedies like the 1949 Mann Gulch fire near Helena, Mont., that killed 13, or the Rattlesnake blaze four years later that claimed 15 firefighters in Southern California.
‘‘This is as dark a day as I can remember,’’ Gov. Jan Brewer said in a statement. ‘‘It may be days or longer before an investigation reveals how this tragedy occurred, but the essence we already know in our hearts: fighting fires is dangerous work.’’
Brewer said she would travel to the area on Monday.
Chuck Overmyer and his wife, Ninabill, said they lost their, 1,800-square-foot home in the blaze.
They were helping friends flee when the blaze switched directions and moved toward his property. They loaded up what belongings they could, including three dogs and a 1930 model hot rod on a trailer. As he looked out his rear view mirror he could see embers on the roof of his garage.
‘‘We knew it was gone,’’ he said.
He later gathered at the Arrowhead Bar and Grill in nearby Congress along with locals and watched on TV as he saw the fire destroy his house.
‘‘That was when we knew it was really gone,’’ he said.
He later fielded a phone call from a friend in which he said, ‘‘Lost it all, man. Yep, it’s all gone.’’
Morrison said the fire grew in intensity when winds began gusting at up to 24 mph in the late afternoon.
‘‘You get some winds, and it can take off on you,’’ he said.
Two hundred firefighters were working on the fire Sunday, but several hundred more were expected to arrive Monday when a new fire management team takes over.
The fire has forced the closure of parts of state Route 89. It was zero percent contained late Sunday.Continued...
end quote from:

The main reason likely that they died was that the air temperatures were so high that when you added the heat of the fire on top of that no human brain could survive it even in a mylar emergency shelter.

Email ThisBlogThis!Share to TwitterShare to FacebookShare to Pinterest
Labels: 19 Firefighters dead in Arizona

The Heat Record to Beat: 134 degrees 100 years ago in Death Valley

Parts of the country are experiencing triple-digit temperatures as Sunday marked day three of a heat wave that has punished much of the western United States. NBC's Gabe Gutierrez reports.
By Jeff Black, Staff Writer, NBC News
The Southwest again saw soaring temperatures on Sunday, with Las Vegas tying an all-time high of 117 degrees and forecasters predicting the aptly named Furnace Creek in the heart of Death Valley, Calif., falling just short of a 100-year high of 130 degrees.
The deadly scorcher in the West led the National Weather Service to post excessive heat warnings for large parts of California as well as Nevada and Arizona, and heat advisories for other parts of Nevada as well four other western states.

David McNew / Getty Images
Death Valley National Park employee Anna Gilay makes her usual seven-mile morning run at 6:55 a.m. with the unofficial temperature already reaching 103 degrees as a heat wave spreads across the West on Sunday.
In Las Vegas, the temperature hit 117 degrees at McCarran International Airport on Sunday, tying an all-time high for any month of the year, Weather.com reported. That temperature was last reached on July 24, 1942 and July 19, 2005. The normal high temperature for this time of year in Vegas is 103 degrees.

The heat wave turned deadly in Sin City Saturday when a Las Vegas Fire & Rescue crew responded to a report of an elderly man in cardiac arrest at a residence without air conditioning.
When paramedics arrived, they found the man was dead, NBC station KSNV reported. The man, who was not identified, did have medical issues, but paramedics characterized his death as heat-related.
In Furnace Creek — one of the hottest places on Earth — temperatures didn't quite reach the forecast 130. Instead, the weather station at Death Valley National Park reported a high of 128 degrees, still tying the record for the highest reading in the United States during the month of June. The Weather Service extended the excessive heat warning for parts of California and Nevada into the July 4 holiday.

Saturday’s high at Furnace Creek was also 128 degrees.
The highest-ever recorded air temperature on the planet, according to the Weather Service, was 134 degrees on July 10, 1913, in Death Valley’s Greenland Ranch.
Heat advisories were also in effect Sunday into Tuesday for the Pacific Northwest, where highs in Seattle and Portland could reach into the 90s. East of the Cascade Mountains and into the Columbia River Gorge temperatures could even soar to more than 105 degrees, according to the Weather Service.
In Arizona on Sunday, 50 homes in the central Arizona community of Yarnell had to be evacuated as searing temperatures, low humidity and winds allowed a wildfire to spread.
And in Pasadena, Calif., where temperatures soared into triple digits, at least 12 runners in a marathon event experienced heat-related illnesses, Pasadena Fire Department spokeswoman Lisa Derderian told NBCLosAngeles.com. Four men in their 20s were transported to hospitals in serious condition during the race, she said.
Saturday saw a slew of weather records broken, Weather.com reported, including in Phoenix, Ariz., which saw its fourth-hottest day in history, with a temperature of 119 degrees.
end quote from:

Email ThisBlogThis!Share to TwitterShare to FacebookShare to Pinterest
Labels: The Heat Record to Beat: 134 degrees 100 years ago in Death Valley

I called my friend in Mt. Shasta a few minutes ago and he said he was going up to the lake at 6000 feet to try to beat the heat. He said it's pretty brutal there today. Most people in Mt. Shasta don't have air conditioners in their homes so this kind of heat is a problem there. So, people have to do whatever they can to get through the heat even in the Mountains at 3500 feet and above.
Posted by intuitivefred888 at 3:17 PM No comments: 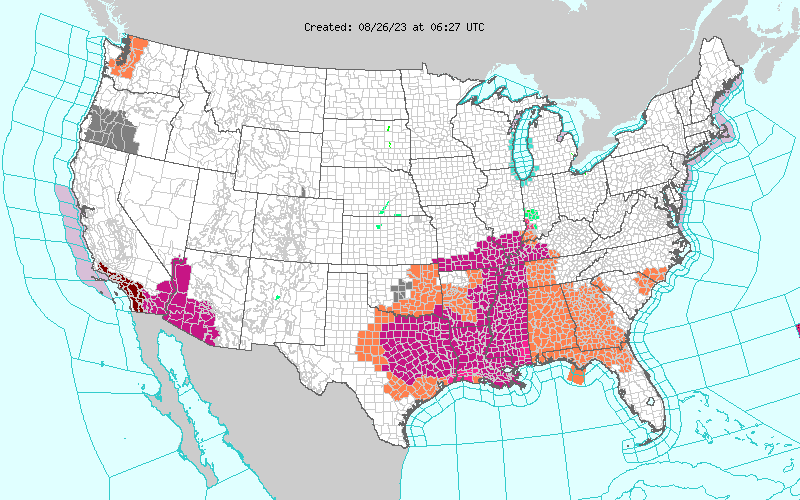 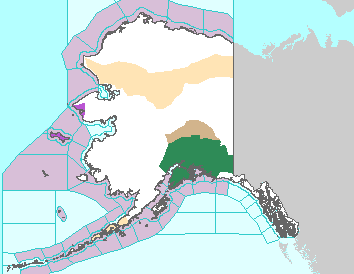 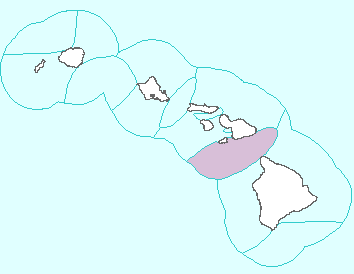 American Samoa Guam Puerto Rico/Virgin Islands
Click on the map above for detailed alerts or
Public Alerts in XML/CAP v1.1 and ATOM Formats
end quote from:
http://www.weather.gov/
If you look carefully at this weather hazard map it is interesting to me that most of the U.S. is having hazardous weather all at the same time. In the west it is extreme heat or weather warnings in the north but if you look closely east of the Colorado Rockies you also see a lot of yellow which likely means thunderstorms or tornadoes. So, most of the U.S. at this time is having one kind of hazardous weather or another.
Posted by intuitivefred888 at 2:12 PM No comments: