This article is mostly from a Time Magazine on the subject. I just took all the individual types of drones then listed and went to Wikipedia and shared that with you then in 2013. However, because of drones being used now regularly in Syria and Iraq and Yemen many more people likely are interested in them now around the world.

I was looking at the Time magazine article on drones from hummingbird size to really large ones. The first four I will share have only cameras on board and so are non-lethal and only used to gather visual and sometimes sound information wherever they go. The second 4 (3 for air and 1 for sea use) are military grade and potentially lethal. Actually, I find the humminbird in some ways the most disturbing because you actually might mistake it for a real hummingbird while having an important conversation regarding business or private information that you really don't want the whole world to know because it is your personal private information after all and you do have the right of privacy. However, as far as I know this is a U.S. Government intelligence tool and not for private use at present.

begin quote from wikipedia under the heading "nano air vehicle"

From Wikipedia, the free encyclopedia
Jump to: navigation, search
The AeroVironment Nano Hummingbird or Nano Air Vehicle (NAV) is a tiny, remote controlled aircraft built to resemble and fly like a hummingbird, developed in the United States by AeroVironment, Inc. to specifications provided by the Defense Advanced Research Projects Agency (DARPA). The Hummingbird is equipped with a small video camera for surveillance and reconnaissance purposes and, for now, operates in the air for up to 11 minutes. It can fly outdoors, or enter a doorway to investigate indoor environments. It was announced to the public on 17 February 2011.[1][2][3]

DARPA contributed $4 million to AeroVironment since 2006[4] to create a prototype "hummingbird-like" aircraft for the Nano Air Vehicle (NAV) program.[5] The result was called the Nano Hummingbird which can fly at 11 miles per hour (18 km/h) and move in three axes of motion. The aircraft can climb and descend vertically; fly sideways left and right; forward and backward; rotate clockwise and counter-clockwise; and hover in mid-air. The artificial hummingbird maneuver using its flapping wings for propulsion and attitude control. It has a body shaped like a real hummingbird, a wingspan of 6.3 inches (160 mm), and a total flying weight of 0.67 ounces (19 g)—less than an AA battery. This includes the systems required for flight: batteries, motors, and communications systems; as well as the video camera payload.

DARPA established flight test milestones for the Hummingbird to achieve and the finished prototype met all of them, and even exceeded some of these objectives:[3]
The device is bigger and heavier than a typical real hummingbird, but is smaller and lighter than the largest hummingbird varieties. It could be deployed to perform reconnaissance and surveillance in urban environments or on battlefields, and might perch on windowsills or power lines, or enter buildings to observe its surroundings, relaying camera views back to its operator.[4] According to DARPA, the Nano Air Vehicle's configuration will "provide the warfighter with unprecedented capability for urban mission operations."[5]

This unique helicopter was intended to be the prototype for a line of much larger civil and military quadrotor helicopters. The design featured two engines driving four rotors with wings added for additional lift in forward flight. No tailrotor was needed and control was obtained by varying the thrust between rotors. Flown successfully many times in the mid 1950s, this helicopter proved the quadrotor design and it was also the first four-rotor helicopter to demonstrate successful forward flight. Due to a lack of orders for commercial or military versions however, the project was terminated.

Small quadrotor aircraft are also produced commercially[12] and for military roles such as observation.[13] 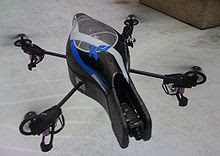 Flying prototype of the Parrot AR.Drone

end quote from Wikipedia under the Heading "Quadrotor".

I couldn't find a page yet at Wikipedia regarding the Draganflyer X6 so I have to quote directly from it's actual page.

Applications at a Glance

Features at a Glance

What is the Draganflyer X6?

The Draganflyer X6 helicopter accepts multiple interchangeable video camera and still camera modules.
Choose the camera that is best for you:


What can it do for you?

Use the high definition motion video provided by the Draganflyer X6 helicopter for security, reconnaissance, inspection, damage assessment, research, real estate promotion, or advertising. It can be used for virtually anything. Draganflyer X6 Applications

With no unnecessary moving parts, the Draganflyer X6 helicopter will operate without maintenance many times longer than conventional helicopters. The motors directly drive the rotors; there are no gears to wear out. Draganflyer X6 Advanced Power System

The Draganflyer X6 provides many of the same benefits of larger surveillance aircraft at a fraction of the cost. Obtain aerial photography without the cost of having to rent a plane each time! Request a Quote

The Draganflyer X6 helicopter is a revolutionary reconnaissance Unmanned Aerial Vehicle (UAV); it can be transported in a lightweight softshell pack with a military grade backpack while always being ready for flight in minutes. Fly it over hills to get a safe view of what is on the other side. Draganflyer X6 Military Applications

From Wikipedia, the free encyclopedia
Jump to: navigation, search
The AeroVironment RQ-11 Raven is a small hand-launched remote-controlled unmanned aerial vehicle (or SUAV) developed for the U.S. military, but now adopted by the military forces of many other countries.
The RQ-11 Raven was originally introduced as the FQM-151 in 1999, but in 2002 developed into its current form,[2] resembling an enlarged FAI class F1C free flight model aircraft in general appearance. The craft is launched by hand and powered by a pusher configuration electric motor. The plane can fly up to 6.2 miles (10.0 km) at altitudes of appx 500 feet (150 m) above ground level (AGL), and over 15,000 feet (4,600 m) above mean sea level (MSL), at flying speeds of 28-60 mph (45–97 km/h).[3]

The Raven RQ-11B UAV system is manufactured by AeroVironment. It was the winner of the US Army's SUAV program in 2005, and went into Full-Rate Production (FRP) in 2006. Shortly afterwards, it was also adopted by USSOCOM, the US Marines, and the US Air Force for their ongoing FPASS Program. It has also been adopted by the military forces of many other countries (see below). More than 19,000 Raven airframes have been delivered to customers worldwide to date. A new Digital Data Link-enabled version of Raven now in production for US Forces and allies has improved endurance, among many other improvements.
The Raven can be either remotely controlled from the ground station or fly completely autonomous missions using GPS waypoint navigation. The UAV can be ordered to immediately return to its launch point simply by pressing a single command button.[1] Standard mission payloads include CCD color video cameras and an infrared night vision camera.
The RQ-11B Raven UAV weighs about 1.9 kg (4.2 lb), has a flight endurance of 60–90 minutes and an effective operational radius of approximately 10 km (6.2 miles).[4]
The RQ-11B Raven UAV is launched by hand, thrown into the air like a free flight model airplane. The Raven lands itself by auto-piloting to a pre-defined landing point and then performing a 45° slope (1 foot down for every 1 foot forward) controlled "Autoland" descent. The UAV can provide day or night aerial intelligence, surveillance, target acquisition, and reconnaissance. 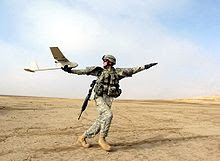 A soldier prepares to launch the Raven in Iraq 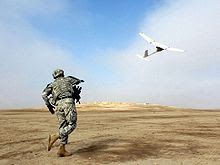 The Raven is launched.
The Raven is used by the United States Army, Air Force, Marine Corps, and Special Operations Command. Additionally, foreign customers include Australia, Estonia, Italy, Denmark, Spain and Czech Republic. As of early 2012, over 19,000 airframes have already been shipped, making it the most widely adopted UAV system in the world today.[6]
The British forces in Iraq are using U.S. Raven equipment and personnel on loan.[7] The Royal Danish Army acquired 12 Raven systems in September 2007 - three systems will be delivered to the Huntsmen Corps, while the remainder will be deployed with soldiers from the Artillery Training Center.[8] A 2010 documentary film, Armadillo, shows Danish forces deploying a Raven in operations around FOB Armadillo in the Helmand province of Afghanistan.
The Netherlands MoD has acquired 72 operational RQ-11B systems with a total value of $23.74 million for use within Army reconnaissance units, its Marine Corps and its Special Forces (KCT).[9] At the turn of the year 2009 to 2010 the systems were deployed above the village Veen, as part of the Intensification of Civil-Military Cooperation.[10] In 2012 and 2013 the Raven was loaned by the Defense department to the police department of Almere to combat burglary. [11]
In April 2011, the U.S. announced that it would be supplying 85 Raven B systems to the Pakistan Army.[12]
In June 2011, the U.S. announced $145.4 million in proposed aid for anti-terror efforts in north and east Africa,[13] including four Raven systems to be used by forces from Uganda and Burundi as part of the ongoing African Union peacekeeping mission in Somalia.[14]

end quote from Search of "Raven Drone at Wikipedia".

The next one is the beginning of the "Potentially Lethal Drones" listed in the Time magazine article on Page 30 and 31 in the Feb. 11th 2013 issue with the Predator Drone on the cover.
It is 2  feet long. It's primary function is to "home in on Snipers" and to go to them and blow them up along with itself.

en.wikipedia.org/wiki/AeroVironment_Switchblade
The operator looks through a viewer that displays video from the drone. Switchblade can also be directed to co-ordinates using Global Positioning System (GPS) ...

From Wikipedia, the free encyclopedia
Jump to: navigation, search
The Switchblade is an unmanned aerial vehicle developed by AeroVironment. It is designed as a "kamikaze," being able to crash into its target with an explosive warhead to destroy it. The Switchblade is small enough to be carried in a backpack and can be launched from a variety of ground and air platforms.[1]

The Switchblade has a small warhead and is launched from a 60 cm long container/launcher tube. As it launches its small wings unfold and can be guided to its target via a nose-mounted camera. The operator looks through a viewer that displays video from the drone. Switchblade can also be directed to co-ordinates using Global Positioning System (GPS). Powered by an electric motor it can reach speeds up to 80 kilometres per hour (50 mph) and loiter for up to 40 minutes.[2] The Switchblade weights 1 kilogram (2.2 lb) and can be fired from a man-portable launch tube or a 70 mm rocket pod. It is operated by the same equipment used to control other AeroVironment UAVs. The explosive effect of the warhead is about equivalent to a hand grenade.[3]

The Switchblade was first tested in 2010 by the United States Army. 10 were purchased for evaluation and were deployed successfully.[3] In September 2011, the Army ordered over a hundred for troop use.[4] The Army then issued a $5.1 million contract modification effective March 20, 2012 to their previous order to produce and deliver more systems.[5]
In May 2012, the United States Marine Corps ordered the Switchblade UAV.[6]

The next one is the only sea drone mentioned in this grouping at Time magazine the drone issue at the top of the page on page 31. It is called the Sea Fox. It is a small, maneuverable underwater drone that searches for anddestroys floating mines. Last year the Navy deployed it in the Straight of Hormuz.

From Wikipedia, the free encyclopedia
Jump to: navigation, search
The Seafox is anti-mine marine drone. It is an expendably-priced, hunter-killer remotely operated vehicle (ROV) manufactured by Atlas Elektronik to destroy ground and moored mines.

Email ThisBlogThis!Share to TwitterShare to FacebookShare to Pinterest
Labels: reprint of: Drones very small to large