The problem with Economic Sanctions: They kill the poor in the nation being sanctioned but not the ruling class

Other words, "Sanctions starve people to death in the countries being sanctioned."

Remember the fishing boats turning up from North Korea full of dead people who starved to death in Japan?

They were evidence of people killed by the sanctions of the world upon North Korea.

So, in other words you don't kill the leaders or the ruling class of North Korea, Iran or Russia at all by sanctions, you kill (through starvation) the very poorest most vulnerable people of all in that nation through economic sanctions.

So a good definition of a Sanctions war is: "A Starving War".

Whenever people in Russia, Iran or North Korea are sanctioned people are dying there. This is a given.

So, what are economic Sanctions actually about?

Instead of plagues or wars with armies killing themselves or the common people we starve them to death instead.

What are Trade Tariffs between countries?

A very fast way to reduce world populations when the poorest people in any country cannot afford to buy enough food and goods to survive.

This is also true of poor people in the U.S. by the way!

So, for Trump Trade Tariffs are a way to quickly reduce world populations of the poorest people of all.

After all, it is quite obvious to Trump that ONLY  "Rich White people should survive anyway!"

Email ThisBlogThis!Share to TwitterShare to FacebookShare to Pinterest
Labels: The problem with Economic Sanctions: The kill the poor in the nation being sanctioned but not the ruling class 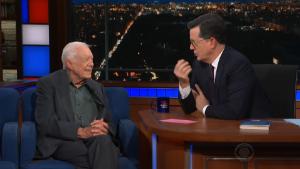 Carter on Stage IV melanoma: I was 'surprisingly at ease'

Jimmy Carter: I thought I had a few weeks left

Former Pres. Carter: Donald Trump a 'flash in the pan'

Carter on Stage IV melanoma: I was 'surprisingly at ease'

Jimmy Carter: I thought I had a few weeks left

Former Pres. Carter: Donald Trump a 'flash in the pan'

(CNN)In a late-night TV appearance Friday, former President Jimmy Carter appeared to ding President Donald Trump, suggesting the current commander-in-chief is "a jerk."
"Does America want kind of a jerk as president?," Stephen Colbert asked the 39th president on "The Late Show with Stephen Colbert," after inquiring whether Carter had been "too nice" to be commander-in-chief.
"Apparently, from this recent election, yes. I never knew it before," Carter answered.
Asked by Colbert about what it takes to be president, Carter said he "used to think it was to tell the truth."
Paid Content For The Looming Tower, A New Hulu Original
Warning Signs Were Missed
Could the worst terrorist attack in modern history have been prevented? Explore the lead-up and the aftermath of 9/11 in this interactive story.
"But I've changed my mind lately," he continued.
Although the remarks seemed in jest, they marked a shift from some of the former president's earlier statements about his successor. In an interview last October, Carter appeared to come to Trump's defense, saying the "media have been harder on Trump than any other president certainly that I've known about."
The 93-year-old former president told Colbert that he prays for Trump, but he wasn't sure if his prayers would be answered.
"I pray that he'll be a good president, and that he'll keep our country at peace, and that he'll refrain from using nuclear weapons, and that he will promote human rights. So, yeah, I pray for him," Carter said.
Carter also offered his thoughts on North Korea, reiterating his opposition to sanctions. He told CBS News last week that he had received a briefing from the Trump administration on North Korea and that he'd be willing to travel to that nation on the current administration's behalf.
CNN's Nicole Chavez and Betsy Klein contributed to this report.
Posted by intuitivefred888 at 10:27 PM No comments:

Email ThisBlogThis!Share to TwitterShare to FacebookShare to Pinterest
Labels: President Carter things Sanctions are bad because they only kill the poor people in the countries being sanctioned
Newer Posts Older Posts Home
Subscribe to: Posts (Atom)