Faulty pyrotechnics may have sparked the fast-spreading blaze at a performance packed with local university students. nightclub. Relatives of victims of a fire that broke out at a nightclub weep in Santa Maria, Brazil.
We haven't learned from past mistakes
Deadly smoke, lone blocked exit: 230 die in Brazil
Kiss nightclub fire

A look at notable deadly nightclub fires
A fire that swept through a crowded nightclub in southern Brazil early Sunday appears to be the deadliest in more a decade. Here is a look at some of the biggest nightclub fires in the past century.
Source: AP
Sheena Rossiter, Special for USA TODAY3:42p.m. EST January 27, 2013

Faulty pyrotechnics may have sparked the fast-spreading blaze at a performance packed with local university students. 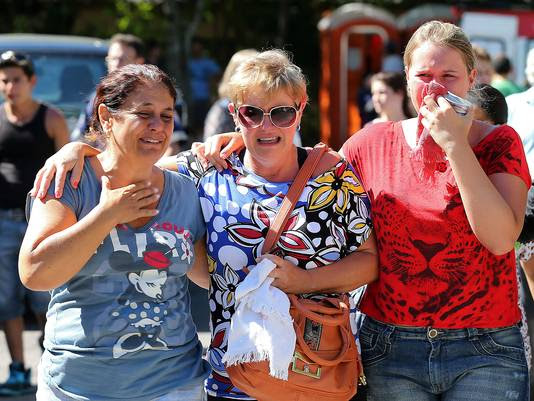 SAO PAULO, BRAZIL — A blaze at a Brazilian nightclub left 233 dead early Sunday morning, in what appears to be the world's deadliest nightclub fire in more than a decade.
More than 100 were injured when the fire broke out at 2 a.m. at a nightclub called Kiss in Santa Maria, Brazil, at the southern tip of the country near the borders with Argentina and Uruguay.
Police Maj. Cleberson Braida Bastianello told the Associated Press that the toll had risen to 233 with the death of a hospitalized victim. Officials earlier had counted 232 bodies that had been brought for identification to a gymnasium in Santa Maria.
The club was hosting an event for a local university, according to local media outlets, and most of the attendees were students of that school, the Federal University of Santa Maria in the southern state Rio Grande do Sul.
Television images showed smoke pouring out of the nightclub as shirtless, young male partygoers joined firefighters in wielding axes and sledgehammers, pounding at windows and walls to break through to those trapped inside. Teenagers sprinted from the scene desperately trying to find help — others carried injured and burned friends away in their arms.
"There was so much smoke and fire, it was complete panic and it took a long time for people to get out, there were so many dead," survivor Luana Santos Silva told the Globo TV network. 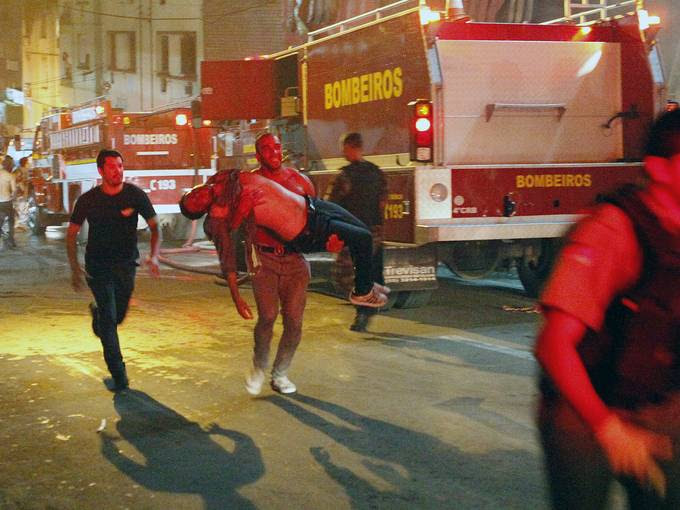 A man carries an injured victim of a fire at the Kiss club in Santa Maria city, Rio Grande do Sul state, Brazil, early on Jan. 27. The death toll from a fire that swept through the crowded nightclub has risen to 232, according to the Associated Press. Also, more than 200 are injured.  Agencia RBS, AP
Fullscreen
Next Slide
Federal Health Minister Alexandre Padhilha said most of the injured are suffering from smoke inhalation and only a few were severely burned.
Rodrigo Moura, identified by the newspaper Diario de Santa Maria as a security guard at the club, said it was at its maximum capacity of between 1,000 and 2,000, and customers were pushing and shoving to escape.
However, Dr. Paulo Afonso Beltrame, a professor of the medical school at the Federal University of Santa Maria who raced to the hospital to help victims, said he was told the club was filled far past its capacity.
The fire may have started as a result of faulty pyrotechnics on stage during a live band performance, media outlet G1 reported.
Guitarist Rodrigo Martins told Radio Gaucha that the band, Gurizada Fandangueira, started playing at 2:15 a.m. "and we had played around five songs when I looked up and noticed the roof was burning"
"It might have happened because of the Sputnik, the machine we use to create a luminous effect with sparks. It's harmless, we never had any trouble with it.
"When the fire started, a guard passed us a fire extinguisher, the singer tried to use it but it wasn't working"
He confirmed that accordion player Danilo Jacques, 28, died, while the five other members made it out safely.
Michele Pereira told the Folha de S. Paulo newspaper that she was near the stage and that the fire broke out after band members lit flares.
"The band that was onstage began to use flares and, suddenly, they stopped the show and pointed them upward. At that point the ceiling caught fire. It was really weak but in a matter of seconds it spread," Pereira said. 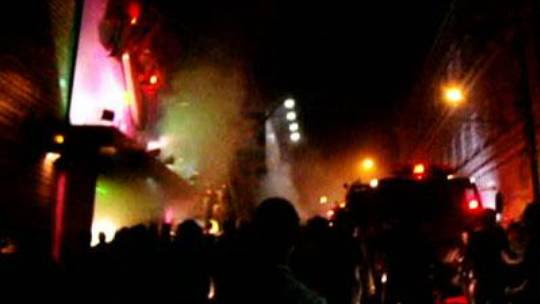 Some survivors claimed revelers tried to escape before the fire got out of control, but were held back by security guards because they had not yet paid their bar tab, according to Radio Estadao ESPN.
Murilo de Teledo Tiescher, a medical student, told G1, "They didn't want to let people out without paying. There was a bit of a fight breaking out at the doors ... There was a lot of fire and a lot of smoke."
It's common for bar patrons in Brazil to have a running bar tab throughout the night, better known as a comanda, which they then pay before leaving. Patrons are only allowed to leave once they provide a stamped comanda to the bounce.
There's also uncertainty if there was an emergency exit, according to local media reports, and one survivor told G1 that the only exit was the front door.
"I don't think there was an emergency exit," Fernanda Bona told G1. Bona, who was at Kiss taking photos for the club when the fire broke out, added, "We didn't know what was happening inside. It all happened in five minutes, not even. Five minutes after I got out, I saw a lot of panic and lots of people trying to get out. "
Brazilian President Dilma Rousseff flew back from a summit in Santiago, Chile, because of the blaze.
"We are together necessarily. We are going to make it through this tragedy," Rousseff said.
Santa Maria Mayor Cezar Schirmer declared a 30-day mourning period, and Tarso Genro, the governor of the southern state of Rio Grande do Sul, said officials were investigating the cause of the disaster.
Chris Jelenewicz, engineering program manager for the Society of Fire Protection Engineers, says no one realizes how fast a fire can spread, but if protection systems are designed well, deaths and injuries can be minimized or eliminated.
"When people do know there is a fire, they usually try to exit the same way out they came in ... and this is when we see a crowd crush and bodies start to pile up," he said. "I hope Brazil takes a look at this since these type of accidents don't ever happen if the building is properly designed with fire protection issues."
Sunday's fire appeared to be the worst at a nightclub since December 2000, when a welding accident reportedly set off a fire at a club in Luoyang, China, killing 309.
Contributing: The Associated Press 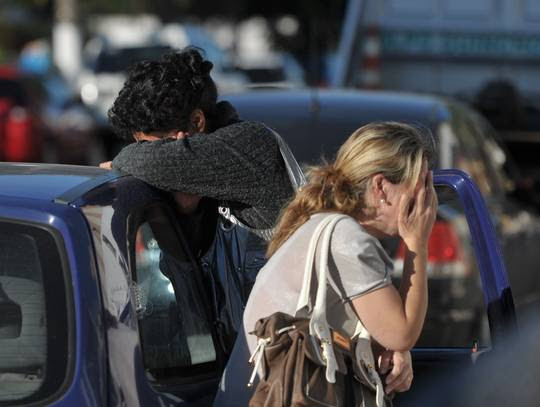 Relatives of victims react to news of the fire at a nightclub in southern Brazil on Sunday.(Photo: Lauro Alves, AFP/Getty Images)