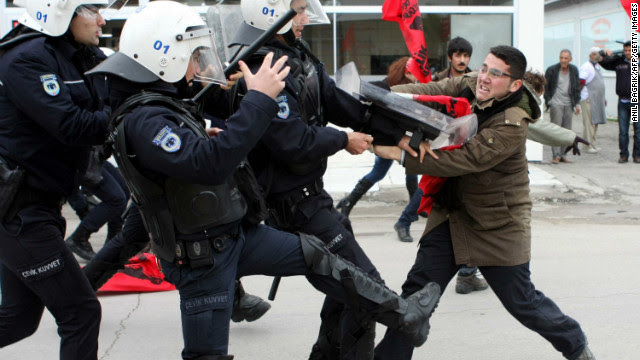 A leftist clashes with Turkish policemen during a protest against NATO Patriot missiles on January 21 in Adana.
STORY HIGHLIGHTS
(CNN) -- The first of six Patriot missile batteries intended to protect Turkey from Syrian threats is operational along the countries' shared border, NATO said Saturday.

The other five batteries, which NATO says are to be for defensive purposes only, are expected to be in place in coming days.
NATO foreign ministers decided in December to deploy the batteries after Syria launched Scud missiles near the Turkish border. And in October, errant Syrian artillery shells hit the Turkish border town of Akcakale.
Mission impossible? Creating the 'Syria of the future' right now

Syrian rebels create court system
The missile battery that is now operational is in the city of Adana. Patriot systems will also be deployed to help protect the Turkish cities of Kahramanmaras and Gaziantep, NATO said.
Turkish Foreign Minister Ahmet Davutoglu said this month that the missile batteries will stay only as long as there is a threat.
In Syria, at least 96 people were killed across the country Saturday, according to the Local Coordination Committees for Syria, a network of opposition activists. Thirty-seven of the deaths were in Aleppo province, 29 in Damascus and its suburbs, and 18 in Homs province.
The Syrian crisis: Where's U.S. aid going?
The group reported fierce shelling by the regime in the Damascus suburbs. Injuries were reported after aircraft dropped cluster bombs near Aleppo, the group said.
Also Saturday, a senior Iranian official said an attack on Syria would be regarded as a strike against Iran and its allies, according to the Mehr News Agency.
Ali Akbar Velayati, a senior advisor to Ayatollah Ali Khamenei, the supreme leader of Iran, also praised Syria's logistical support for the Lebanese Shiite group Hezbollah, which the United States lists as a terrorist organization.
Al-Assad won't fall soon, Jordan's king says

end quote from:
NATO missile site now on Syria border
Posted by intuitivefred888 at 10:41 AM