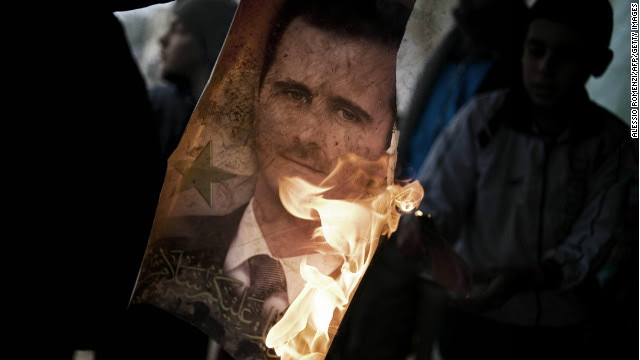 "Anyone who says that Bashar's regime has got weeks to live really doesn't know the reality on the ground," he said during a panel appearance with CNN's Fareed Zakaria at the World Economic Forum in Davos, Switzerland.
"They still have capability. ... So (I expect) a strong showing for at least the first half of 2013."
Nonetheless, fears are growing that Syria may implode as the protracted conflict gets nastier.
Any fragmentation of the country into small states would be "catastrophic and something that we would be reeling from for decades to come," Abdullah said.

Thousands of Syrians stream into Jordan in days

I was thinking about the fact that if Syria's Assad only really completely controls Damascus and sometimes not even all of that that he only controls about 2% of Syria. So, it is like he is in control only of a city State sort of like Athens in Ancient Greece or something like East Berlin during the Iron Curtain days and the Berlin Wall. Because de facto 98%of Syria appears to be permanently under the Control of the Rebel Army. So, if we come back 20 years from now is it still going to be like this? It's hard to say. This reminds me of the old Cold war from the 1950s through Glasnost around 1990 because of 30,000 Russians either married to Syrians or soldiers or diplomats there now being evacuated if they wish. And now China is in Egypt with Cosco and it's military ships. What is this 'Cold War 2' or something else entirely?

repeat quote from above:


He also warned of the threat of foreign jihadist fighters now in Syria.
Al Qaeda has been established there for the past year and is getting support "from certain quarters," the king said.
"They are a force to contend with, so even if we got the best government into Damascus tomorrow, we have at least two or three years of securing our borders from them coming across and to clean them up," he said. end repeat quote from:
Syria's Bashar al-Assad won't fall soon, Jordan's king says