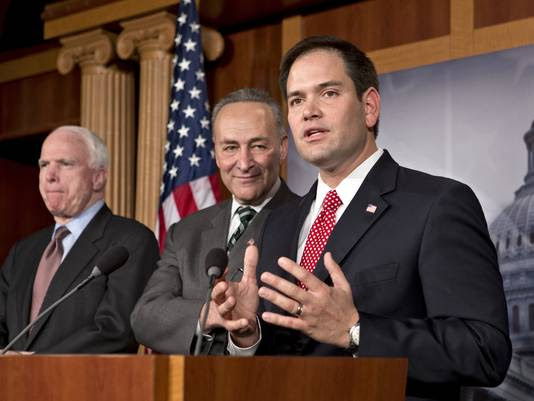 The selling of the bipartisan Senate immigration principles began in earnest Tuesday, as key GOP supporters John McCain and Marco Rubio fanned out on TV and radio to promote their proposal's merits.
Florida Sen. Rubio, a Tea Party favorite, will appear Tuesday afternoon on Rush Limbaugh's show, a day after the conservative talk show host criticized the bipartisan proposal as a form of amnesty.
A group of eight senators -- four Democrats and four Republicans -- on Monday announced they reached agreement on four broad categories to be addressed in sweeping legislation to overhaul the nation's immigration system.
The principles include a path to citizenship, revamping the way immigrants come to the United States legally, boosting ways employers can verify the legal status of workers, and allowing more low-skill workers to come into the country. President Obama on Tuesday will outline his immigration proposal in a speech in Las Vegas.
STORY: Bipartisan plan targets 11 million illegal immigrants
McCain, R-Ariz., pushed back in CBS and MSNBC interviews on the idea that the proposal to create a pathway to citizenship for illegal immigrants already in the United States -- after border security is tightened and these migrants meet a strict set of conditions -- is not amnesty.
"Border enforcement and border security is a pre-requisite," McCain said on CBS This Morning. "And obviously that makes sense since we don't want to have a repeat again some years from now of another group of people coming to this country illegally."
McCain said a pathway to citizenship will be established for people already in the USA who have not committed crimes, pay fines and back taxes, and get in line behind those who have already applied legally for a green card.
"They will have to meet a lot of criteria," McCain said on CBS. "I hope that as more Americans see this proposal that they will understand that we cannot have forever 11 million people living in the shadows in this country." 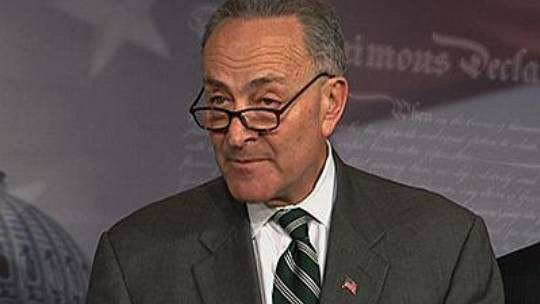 Sen. Charles Schumer of New York, a leading Democrat in the bipartisan group, said Tuesday on MSNBC that there is nothing "easy" in the proposed path to citizenship. "There'll be some admission of wrongdoing. It is not amnesty in any sense of the word," Schumer said.
Rubio's appearance on Limbaugh's radio show could be critical. On Monday, as the senators unveiled their immigration principles, the conservative talk radio host blasted the proposal and the idea that it is a way for Republicans to improve their standing with Latino voters.
"The Republican participation in this is taking place largely because they believe if they don't do it, they will never win the presidency again because they will never get Hispanic votes," Limbaugh said Monday. "That's what they think. ... They have been convinced that Hispanics hate them because of immigration."
In a Fox News interview on Monday night, Rubio told host Sean Hannity that the proposals are good from the standpoint of conservative politics.
"It is a good moment to remind people and the country that the vast majority of conservatives favor legal immigration, and we don't have a legal immigration system that works right now," Rubio said. "And our problem with illegal immigration is that it undermines legal immigration."