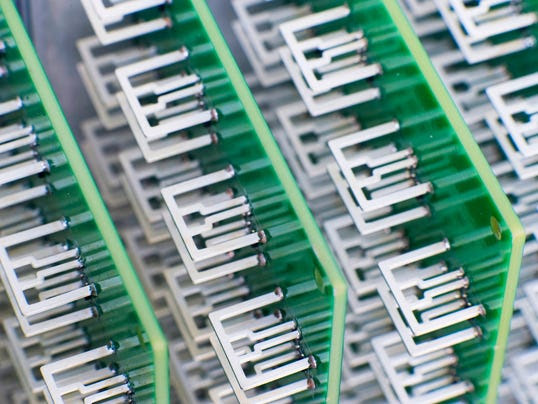 (Photo: Aereo)
1278 CONNECT 284 TWEET 104 LINKEDIN 91 COMMENTEMAILMORE
WASHINGTON -- The Supreme Court blocked an innovative Internet streaming service Wednesday from potentially upending the way Americans watch television.
The justices sided 6-3 with the nation's major TV networks and cable companies against Aereo, an Internet startup that rebroadcasts live programs to subscribers without paying retransmission fees.
The broadcasters had warned that if one company was allowed to avoid those fees, others -- from Dish Network to DirecTV -- surely would follow. That would risk billions of dollars in revenue that broadcasters plow back into creating new programs. Retransmission fees brought in an estimated $2.37 billion in 2013.
Aereo had argued that it differed from cable and satellite services because each subscriber is assigned an individual, dime-sized antenna, often stored on rooftop circuit boards. But a majority of justices saw those antennas as just a way around copyright laws.
"Aereo's system is, for all practical purposes, identical to a cable system," Justice Stephen Breyer wrote for the majority. "Both use their own equipment. Both receive broadcast television programs, many of which are copyrighted. Both enable subscribers to watch those programs virtually as they are being broadcast."
In making their limited ruling against Aereo, the justices stressed that new technologies such as cloud computing should not feel constrained. During oral arguments in April, Aereo's attorney, David Frederick, said "the cloud-computing industry is freaked out about this case."
"We believe that resolution of questions about cloud computing, remote storage DVRs, and other novel matters not now before us should await a case in which they are clearly presented," Breyer said.
Aereo, backed by media mogul Barry Diller, co-creator of Fox Broadcasting, operates in 11 major cities and had plans to expand rapidly. The court's ruling threatens to put it out of business.
Reacting to the decision, Diller said "blocking this technology is a big loss for consumers." He congratulated Aereo CEO Chet Kanojia and his staff "for fighting the good fight."
Chief Justice John Roberts and Justices Anthony Kennedy, Ruth Bader Ginsburg, Sonia Sotomayor and Elena Kagan agreed with the ruling. Justices Antonin Scalia, Clarence Thomas and Samuel Alito dissented, arguing that Aereo successfully exploited a loophole in the federal Copyright Act.
"It is not the role of this court to identify and plug loopholes," Scalia said. "It is the role of good lawyers to identify and exploit them, and the role of Congress to eliminate them if it wishes. Congress can do that ... in a much more targeted, better informed, and less disruptive fashion that the crude 'looks-like-cable-TV' solution the court invents today."
But Breyer said Aereo qualifies as a broadcaster, not merely a supplier of equipment, and performs its work publicly, not privately to each subscriber, as the company had asserted.
Aereo offers TV viewers an enticing package: For $8 or $12 a month, they can get a couple dozen live channels and 20 to 60 hours of remote storage space on cloud-based DVRs. By contrast, cable packages that include scores of seldom-watched channels can cost $100 or more.
The business model, however, was always suspect. Patterned after home antennas, which remain legal for consumers who don't mind limited service and poor reception, Aereo assigns a tiny antenna to each subscriber. That way, it argued, no two customers receive the same "public performance."
It was an argument that had won support from lower federal courts in New York. By the time the case arrived at the Supreme Court, however, Aereo had attracted a wide array of opponents: broadcast networks, cable companies and professional baseball and football leagues, to name a few.
The Obama administration also sided with broadcasters. It argued that licensed services such as Netflix and Hulu prove that cloud-based systems can pay copyright holders.
A federal judge in Utah ordered Aereo to cease operations in six other states in February, calling its business model indistinguishable from that of a cable company, which must pay broadcasters for content. As a result, customers in Denver and Salt Lake City lost their service.
The company operates in New York, Boston, Atlanta, Detroit, Cincinnati, Baltimore, Miami and four cities in Texas.
Follow @richardjwolf on Twitter.
end quote from:

By Alex Barinka June 25, 2014
Aereo Inc. says a U.S. Supreme Court ruling that the online TV-streaming company infringes broadcasters’ copyrights doesn’t mean the battle is over yet.
“We are disappointed in the outcome, but our work is not done,” Aereo Chief Executive Officer Chet Kanojia said in a statement. “We will continue to fight for our consumers and fight to create innovative technologies that have a meaningful and positive impact on our world.”
The Supreme Court ruled today that the Barry Diller-backed Internet startup is violating broadcasters’ copyrights. The 6-3 ruling is a triumph for broadcast companies, including Walt Disney Co.’s ABC, 21st Century Fox Inc., Comcast Corp.’s NBCUniversal and CBS Corp. (CBS:US) They said Aereo was threatening the underpinnings of the industry by selling programming online without paying licensing fees.

Story: Aereo Lost at the Supreme Court. Now What?
The court fight centered on a provision in the federal copyright law that gives owners the exclusive right to perform their works “publicly.” Justice Stephen Breyer said Aereo violated that provision, operating much like a cable-TV provider.
Kanojia said the decision could send a “chilling message” to the technology industry.
“Today’s decision by the United States Supreme Court is a massive setback for the American consumer,” Kanojia said in the statement. “We’ve said all along that we worked diligently to create a technology that complies with the law, but today’s decision clearly states that how the technology works does not matter.”

Aereo set out to deliver access to broadcast TV content to consumers who didn’t want to pay for cable-TV bundles. The startup’s service, which records programming from an off-site antenna and delivers it via the Internet to a single customer, costs as little as $8-a-month.
Justice Antonin Scalia, who wrote the dissenting opinion, said Aereo didn’t violate the “public performance” provision because it let subscribers choose which programs they were receiving. He said the justices should have sent the case back to a lower court to let the broadcasters press other copyright arguments. If necessary, he said, the broadcasters could have taken their concerns to Congress.
To contact the reporter on this story: Alex Barinka in New York at abarinka2@bloomberg.net

Video: Supreme Court Killed Aereo With No Plan B: Sweeney