South Sudanese rebels allied to ex-vice president Riek Machar sought to retake control of a key town Monday, the army said, as hopes faded that an upcoming ceasefire deadline will be met in the violence-wracked nation. United Nations peacekeepers said they were concerned over claims that thousands…
AFP

By Waakhe Simon Wudu 1 hour ago
Juba (AFP) - South Sudanese rebels allied to ex-vice president Riek Machar sought to retake control of a key town Monday, the army said, as hopes faded that an upcoming ceasefire deadline will be met in the violence-wracked nation.
United Nations peacekeepers said they were concerned over claims that thousands of armed youths from Machar's Nuer tribe were readying to attack Bor, the capital of Jonglei state.
International efforts have tried to stop two weeks of violence, believed to have left thousands dead, from spiralling into all-out civil war.
"The forces of Riek Machar are now advancing on Bor, but we are confident we will hold them off and protect the town," army spokesman Philip Aguer told AFP. "The people in Bor are fearing an attack at any time."
Ugandan President Yoweri Museveni, speaking after meeting with President Salva Kiir in Juba, warned that Machar must comply with a ceasefire deal ending tomorrow or face action by regional nations.
The conflict, fuelled by an old rivalry between Kiir and Machar, has fanned ethnic differences between Kiir's Dinka group and Machar's Nuer clan in the country, which won independence from Sudan in 2011.
Bloodshed has swept across the nation, with fierce battles reported in strategic oil-producing areas and grim reports of massacres, rapes and killings. 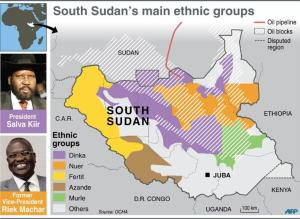 Graphic showing the ethnic profile of South Sudan (AFP Photo/)
Rebels were currently reported around 50 kilometres (30 miles) northeast of Bor.
Reconnaissance flights by the UN Mission in South Sudan (UNMISS) on Sunday identified armed groups but could not confirm the force's size.
The gunmen, a loose ethnic militia force loyal to Machar and dubbed the "White Army", are heavily armed -- some carrying automatic rifles or spears, others armed with rocket propelled grenades. They are known for smearing white ash onto their bodies as war-paint and to ward off insects.
The world's youngest nation plunged into chaos on December 15 when Kiir accused his former deputy of mounting a coup.
Ceasefire deadline Tuesday
Regional leaders at the Inter-Governmental Authority on Development (IGAD) have set Tuesday as a deadline for face-to-face talks between Kiir and Machar. 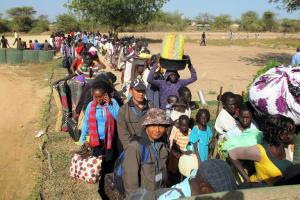 Civilians queue outside the UNMISS compound in Bor, South Sudan on December 18, 2013 (AFP Photo/Roll …
If Machar doesn't respond "we shall have to go for him" Museveni told reporters, after meeting Kiir in Juba.
Museveni did not clarify if his threat involved military action, but Ugandan troops deployed in South Sudan days after the fighting began, both to support Kiir and to help evacuate its citizens.
"We sent some forces here under Salva Kiir to see how we can help to restore order, it's solidarity," Museveni added.
The IGAD deal said only that leaders would "consider taking further measures" if hostilities did not cease.
Ethiopian Foreign Minister Tedros Adhanom also met with Kiir in Juba on Monday.
While the government has said it was willing to observe a ceasefire, Machar -- who was sacked as vice-president in July -- has made demands including the release of his arrested political allies before committing to a truce. 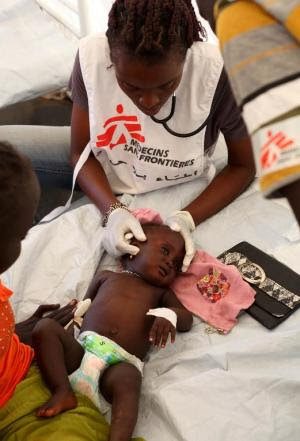 A Medecins Sans Frontieres doctor Christine Bimansha treats a young patient in a Juba hospital on De …
South Sudanese government spokesman Makuei told AFP on Sunday: "I really doubt if we, the South Sudanese government, will be in a position to sit with Riek Machar... He has not even respected the call by IGAD and the African Union to agree to the cessation of hostilities."
After fighting erupted, rebels swiftly took over several key regional cities including Bentiu, in the northern oil-producing state of Unity, and Bor, which was later recaptured by the army.
There was also heavy fighting in the town of Malakal, state capital of oil-producing Upper Nile, but the army said they were back in full control.
A video posted by UN humanitarian chief in South Sudan Toby Lanzer in Malakal showed burnt and looted stores and buildings in the centre of town.
"The situation in Malakal is stable, we are in control," Aguer added.
Oil production, which accounts for more than 95 percent of South Sudan's fledgling economy, has also been hit with oil companies evacuating employees.
The UN says some 75,000 have sought refuge in badly overstretched peacekeeper bases and over 180,000 are displaced across the country.
Tens of thousands of Sudanese refugees are also reported to have been affected, while thousands of foreign workers have been fled the country.
Even war-torn Somalia sent in a special aeroplane Monday to evacuate its citizens.

UN peacekeeping reinforcements began arriving in the country last week, the spearhead force of some 6,000 extra troops voted for by the UN Security Council, that will nearly double the size of the mission in the country.
UNMISS chief Hilde Johnson is to brief the UN Security Council later Monday on the crisis.
South Sudan became independent in 2011 after a civil war that killed more than two million people between 1983 and 2005.
View Comments (35)
end quote from: