Fact vs. Fiction in 'American Hustle'


Christian Bale in 'American Hustle' and his sort-of real life counterpart Mel Weinberg (Columbia Pictures/AP)
You're being hustled in "American Hustle" — that much is easy to understand. The tricky party is knowing how much you're being hustled.Ostensibly about Abscam, the Washington bribery scandal of the late '70s/early '80s, the disco-era David O. Russell-directed Oscar contender, starring Christian Bale, Amy Adams, Bradley Cooper, Jeremy Renner, and Jennifer Lawrence, bills itself as work of fiction, which is arguably awesome and honest, but ultimately confusing.
After all, wasn't Abscam real? And aren't Bale and the others kinda-sorta playing real people? And doesn't the title card at the beginning of the movie proclaim "some of this actually happened," indicating that, you know, some of what you're about to see actually happened?
Yes, yes, yes — and here's a brief rundown of what's fact and what's dramatically and follically enhanced fiction. (Spoiler alert! Plot points are discussed.)


Rep. Michael Myers and undercover FBI agent Anthony Amoroso, left (AP Photo/files)
The Scandal
In the movie, a New Jersey mayor and a handful of members of Congress are videotaped as they're handed briefcases of cash in exchange for favors and influence, and that's pretty much what happened in the post-Watergate world, too. One difference is that the real Abscam (the FBI code name for its operation) netted dozens more politicians than were shown in the Russell film.
The Characters
This is where things get fiction-y. None of the movie's main players, led by Bale's combover-king conman Irving Rosenfeld, share names with their real-world counterparts. They do, however, share certain traits and biographical details.
The movie's Rosenfeld is the stand-in for Mel Weinberg, the star of the "The Sting Man: Inside Abscam," a decades-old tell-all (told from Weinberg's perspective) that has been reissued under the billing: "The true story behind the film 'American Hustle.'"

[Related: How Christian Bale’s Combover Inspired the Opening of ‘American Hustle’]
In the movie as in real life (or at least in the book version of real life), Weinberg grew up in the glass business, conned his way to a tidy life, kept a wife and a mistress and worked for the FBI. In a recent interview with the London Telegraph, Weinberg, now in his 80s and living in Florida, claimed he'd sold his life rights to the producers of "American Hustle" for $250,000. In return, he got to meet Bale ("a very down-to-earth guy") and carp about Bale's wardrobe ("I'm wearing a green jacket in one scene. I wouldn't be dead in a green jacket.") 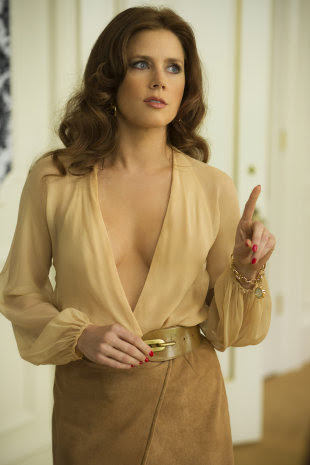 Amy Adams as Sydney Prosser in 'American Hustle' (Columbia Pictures)
Adams's Sydney Prosser is based on Weinberg's mistress, Evelyn Dawn Knight, whom Weinberg subsequently married. In the film, Prosser is an American who adopts a British persona; most accounts of Knight note she actually is British.
In the film, Cooper's Richie DiMaso is the FBI agent at the center of the sting. In the real world, there were two agents: John Good (noted as John Goode in earlier press accounts), who oversaw the operation, and Anthony Amoroso, who posed as the go-between for a moneyed sheik seeking U.S. citizenship. Most accounts peg Amoroso, who's seen in the grainy, black-and-white Abscam videotapes (above), à la Cooper's character, as the jumping-off point for DiMaso.
Renner's Carmine Polito is Hollywood's version of Angelo Errichetti, the longtime New Jersey pol who died this past spring. Like Polito, Errichetti was the well-liked mayor of Camden, N.J., who got taken down by Abscam. In the movie, Bale's character finagles an 18-month sentence for Polito; in real life, Errichetti was slammed with a six-year stint. (He served two and a half years, per an Associated Press look at Errichetti.)
And then there's Lawrence's Rosalyn, the ditzy young wife of Irving Rosenfeld, who in the Weinberg family tree was the fortysomething Marie Weinberg. Aside from the age difference — Lawrence is in her early 20s, and the film doesn't suggest her character is all that much older — there's a tonal difference. Marie Weinberg was seen as no ditz by the likes of longtime Washington columnist Jack Anderson; she was seen as a whistleblower.

(Columbia Pictures)
And this is where things get exaggerated.Weinberg looked to have a combover in the '70s (he's bald or close-cropped now), but he didn't have the epic and artful version that Bale sports in "American Hustle." (Bale's tinted glasses, however, are spot on.)

Elsewhere, the FBI's Amoroso is seen as straight-haired in pictures from the early '80s, while the film's Cooper is seen in perm curlers.
The good mayor Errichetti had some swoop to his hair, but he lacked the Elvis-ian heights that Renner's Polito achieves in the film.

[2014 Golden Globe Awards Nominations: '12 Years,' 'American Hustle' Shine; 'Rush' Surprises]
Lawrence's character piles her long blond hair atop her head; Marie Weinberg, though likewise a blonde, didn't cut quite the same fashionable pose — in footage from the time, her hair appears to be either pinned back or cut short.
As for the Adams character: It's hard to know what the movie got right or what it enhanced. An online photo search for Knight yielded no results. 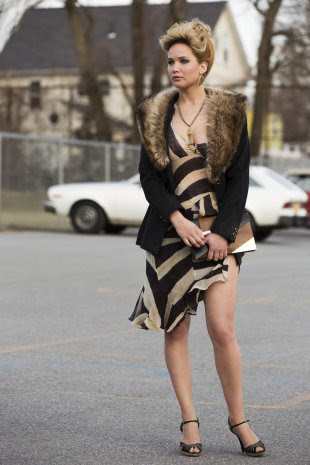 Jennifer Lawrence as Rosalyn Rosenfeld, a fictionalized version of Marie Weinberg, in 'American Hustle' (Columbia …
The Love Story
In the movie, Bale's Rosenfeld is a good man (for a con man) who is torn between Adams's Prosser, the love of his life, and Lawrence's Rosalyn, the mother of his adopted son.
In real life, the Weinbergs were longtime marrieds when Abscam broke — per an Anderson column, the devoted Marie Weinberg once sold her engagement ring to bail out Mel Weinberg when he was arrested for fraud.
Marie Weinberg remained apparently devoted to Mel Weinberg through the early Abscam revelations; in the movie, the marriage of the Bale and Lawrence characters hits the skids earlier, as the sting moves into full swing.
Also, that cool scene in the casino where Lawrence comes face to face with Adams's other woman? Marie Weinberg told Anderson she was unaware of Knight's existence even after Mel Weinberg's story was told in "The Sting Man."
"Mel told me that Bob [journalist-author Robert W. Greene] had made [up the mistress] just to add sex to the book so it would sell," Marie Weinberg said.
Marie Weinberg might appreciate (or maybe not) that it appears as if the Russell film amped up the heat between Adams's and Cooper's characters just to add drama.
The Happy Ending

In the movie, everything mostly works out for Irving Rosenfeld. Irving and Sydney marry, while Irving and Rosalyn come to terms, and she moves on with a mobster friend.
In real life, Marie Weinberg was found hanged to death just weeks after she went to the press claiming Mel Weinberg had profited from Abscam. The 1982 incident was ruled a suicide; she was 50.
And while Mel Weinberg and Evelyn Knight did indeed go on to marry, Weinberg told the Telegraph they subsequently divorced, and that while they still live near each other, "she won't talk to me anymore."
The lesson here is it's good to be a Hollywood movie: You can always end the story when it's at its happiest.
Watch 'American Hustle' Insider Access — '70s Style:

Fact vs. Fiction in 'American Hustle': All the Hairy Details!

You're being hustled in "American Hustled" — that much is easy to understand. The tricky party is knowing how much you're being hustled when it comes to sorting fact from fiction.
Yahoo Movies
Posted by intuitivefred888 at 10:42 AM

Email ThisBlogThis!Share to TwitterShare to FacebookShare to Pinterest
Labels: Fact vs. Fiction in 'American Hustle'