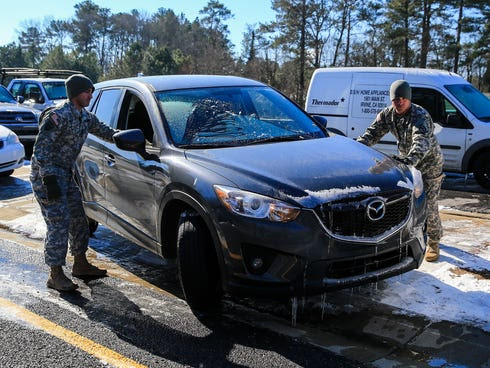 
ADVERTISEMENT
ATLANTA - The parking lots otherwise known as Georgia interstates were clearing out Thursday as the city began to emerge from its icy, two-day gridlock.
The snowstorm that swept across the Deep South this week was blamed for more than a dozen deaths and created havoc for millions, prompting six states to declare emergencies. Nowhere were the problems more severe than in the Atlanta area, where less than 3 inches of snow sent cars and trucks spinning across major roads.
Thousands of motorists spent long hours sitting in traffic Tuesday - and many gave up and walked away. Crystal Paulk-Buchanan, a spokeswoman for the Georgia Emergency Management Agency, said 2,029 vehicles were abandoned on interstate highways in metro Atlanta and on Georgia 400. Hundreds more were abandoned on local roads.
"The Georgia State Patrol can run their information and see whether or not it's been towed," she said. "Or they can drive out (with National Guardsmen) and try to find it."
As the temperature slowly crept above freezing Thursday, people were being sent to one of two staging areas, depending on where they left their cars. Gas and jumps were available, Paulk-Buchanan said.
Kevin Andrews, 50, of Powder Springs arrived at one of those stations looking for his wife Vickie's 2012 Honda Civic. He said she left her car on a highway near the Six Flags amusement park Tuesday. She had left her hospital job at 3:30 p.m. that day -- and was stuck in the car until 7 a.m. Wednesday, when her husband, marooned at work himself until 6 a.m. Wednesday, was able to rescue her, thanks to a co-worker's four-wheel-drive vehicle.
"She was frozen," Andrews said. Sitting in a full-stop gridlock, she was playing the radio and had gotten out of the car around midnight Tuesday to get a blanket from the trunk, Andrews said. She rolled down the back window to have something to hold onto as she fetched the blanket. When she got back in the car, the battery died before she could roll the window back up.
"It was pretty rough on her. She started crying for a second, and I told her to get a hold of herself," Andrews said. "She never lost (cell) phone service, and she was able to talk with me and a lot of her other friends.
"She had her Bible. So she wasn't mad. She was just cold."
Similar stories were playing out all over metro Atlanta.
Dulcy Longines left her 2005 Chevy Equinox about 5:30 a.m. Wednesday when her husband and son came to pick her up. She'd been sitting in the car since 2 p.m. Tuesday, after an ordeal of trying various road alternatives to get home. On Thursday, a state trooper told her that her car wasn't in the system as having been towed, and that the National Guard would take her to look for it where she'd left it.
The State Patrol responded to more than 1,460 crashes between Tuesday morning and Wednesday evening, including two fatal crashes, and reported more than 175 injuries.
Thursday morning rush-hour traffic was much lighter than normal: Most metro area schools canceled classes for the day, state government and many businesses were closed and the Georgia Emergency Management Agency was asking motorists to stay off the roads if possible.
Following another bitterly cold morning Thursday, the thawing-out process was getting underway all across the Deep South. Temperatures were forecast to rise into the 40s in Alabama, Georgia and the Carolinas, according to meteorologist Nick Wiltgen of The Weather Channel.
He said highs Thursday afternoon along the Gulf Coast should get to the low 50s, helping to put an end to the icy misery there.
But another chilly overnight - with temperatures dropping below freezing - is forecast across the region, which means a refreeze of untreated roads and bridges.
The real thaw will get underway Friday, as highs soar into the 50s and 60s in the South, the National Weather Service forecasts. With temperatures staying above freezing overnight Friday, the week of wintry misery could finally be ending.
Contributing: Doyle Rice
end quote from: