'Molly' (similar to Ecstasy) overdoses put students in US hospitals 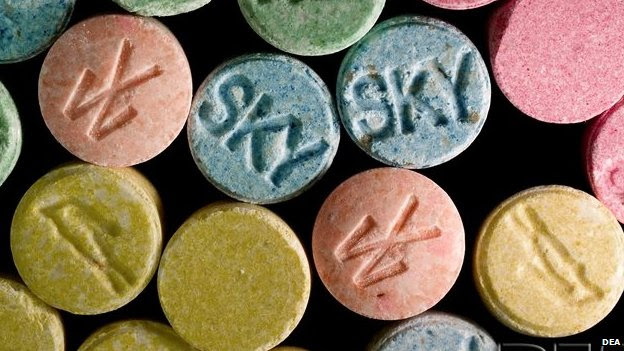 A dozen university students have been treated at Connecticut hospitals after overdosing on "Molly" or MDMA, a popular synthetic party drug.
Police are investigating after the overdoses were reported late Sunday on the campus of Wesleyan University in Middletown, Connecticut.
By Monday, eight remained in hospital and two were in critical condition.
It was unclear whether the students had been together or where the drugs had come from.
Middletown Police Chief William McKenna said that their "first and foremost goal is to obtain information on the batch of Molly that was distributed to the students on the campus," adding, "this information is critical in ensuring the recovery of those students affected."
A pure and more powerful form of MDMA often sold as "Molly" can cause liver, kidney, cardiovascular failure, or death.
In a campus-wide statement, Wesleyan president Michael S Roth urged students to "please, please stay away from illegal substances, the use of which can put you in extreme danger. One mistake can change your life forever".
Dean Michael Whaley, vice president of student affairs at Wesleyan University, sent a letter to the school body on Sunday recommending students to check on their friends.
Ten of the 12 people were Wesleyan students.
In 2013, Molly-related deaths and illnesses forced the Electric Zoo Festival in New York to shut down early after two young people died and four were confined to hospital.
Their deaths came after a string of similar overdoses that year at concerts in Boston, Seattle, Miami and Washington DC, supposedly caused by a bad batch of the drug.
end quote from:

Email ThisBlogThis!Share to TwitterShare to FacebookShare to Pinterest
Labels: 'Molly' (similar to Ecstasy) overdoses put students in US hospitals