Is Trump really a 'big loser' under tax plan?

Trump: Tax cut is my Christmas gift to you

Paul Ryan: Russia will not distract from taxes

Is Trump really a 'big loser' under tax plan?

Trump: Tax cut is my Christmas gift to you

Paul Ryan: Russia will not distract from taxes

Washington (CNN)The Senate GOP's tax plan would increase the deficit by $1.4 trillion over the next 10 years, the Congressional Budget Office estimates.
The estimate summary found that enacting the White House-backed Tax Cuts and Jobs Act would lead to an on-budget deficit increase of about $1.44 trillion. The CBO also estimates that with the removal of Obamacare's individual mandate that is included in the bill, which taxes individuals who opt out of purchasing insurance, "nongroup insurance markets would continue to be stable in almost all areas of the country" over the next 10 years.
However, "average premiums in the nongroup market would increase by about 10% in most years of the decade ... relative to the CBO's baseline projected. In other words, premiums in both 2019 and 2027 would be about 10% higher than is projected in the baseline." 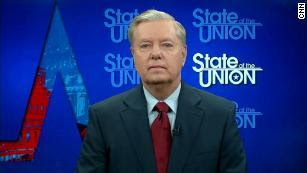 Graham on passing tax reform: 'I think we'll get there'
In addition, the report estimates "(t)he number of people with health insurance would decrease by 4 million in 2019 and 13 million in 2027."
Republican Sens. Ron Johnson of Wisconsin, Jeff Flake of Arizona, and James Lankford of Oklahoma have all expressed criticism over the current tax plan.
President Donald Trump will meet with Senate Republicans on Capitol Hill for the third time in just over a month at their weekly policy lunch on Tuesday. He will address tax reform and other items on the fall legislative agenda.
CORRECTION: This story's headline for mobile devices, search engines and social media has been updated to correctly identify the amount by which the CBO estimates that the Senate GOP's tax plan would increase the deficit over the next decade. It's estimated to be $1.4 trillion.
Posted by intuitivefred888 at 10:59 AM