There is a surealistic quality to now though. People were walking around shaking in their boots when I was 14 during the Cuban Missile Crisis because many or most thought we would all die then. Now it's 55 years later and because somehow we have avoided nuclear war it is unthinkable to most that we won't avoid it now. But, we avoided nuclear war only after Kennedy was assassinated and his brother and Martin Luther King too. This might be important to realize also. When things get like this, soldiers, sailors and airmen on all sides die, leaders die or are deposed too. This is serious stuff folks whether you think it is surrealistic or not. This is a real fight and in real fights some people always die, It's just  a matter of how many will die because many have died already that you know about and don't know about in this.
begin quote from:
Trump confronts
perilous North
Korean test

Washington (CNN)North Korea pushed President Donald Trump closer to a set of excruciating choices with its most potent missile test yet, which shattered a two-month calm in Northeast Asia and set nerves in Washington back on edge.
Trump, who earlier this year warned he would rain "fire and fury" on the isolated state if it continued to threaten the US or its allies, was relatively muted in responding to Kim Jong Un's latest provocation.
"I will only tell you that we will take care of it. ... It is a situation that we will handle," Trump told reporters at the White House.
:
He later attempted to tie the launch to domestic politics, using it to pressure Democrats to move ahead on government spending proposals.
"After North Korea missile launch, it's more important than ever to fund our gov't & military! Dems shouldn't hold troop funding hostage for amnesty & illegal immigration. I ran on stopping illegal immigration and won big. They can't now threaten a shutdown to get their demands," he tweeted.
His quiet resolve may have been calculated to avoid further provoking Kim, or to deprive him of the full propaganda value of his latest move -- if so, this would represent an evolution in the President's public rhetoric on the crisis.
But Trump's vague and unspecific response also reflected the paucity of options he has to deal with North Korea, and how the most serious foreign-policy threat facing his presidency is becoming ever more grave. 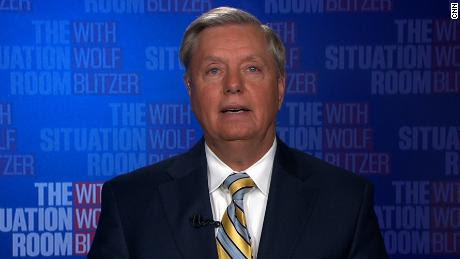 Graham warns of war with North Korea 01:42
It's clear that Tuesday's launch of an intercontinental missile that blasted off from Sain Ni in North Korea and, according to Defense Secretary James Mattis, went higher "than any previous shot they've taken" represents a serious escalation of the crisis.
To begin with, the test flight demonstrated Pyongyang's theoretical ability to hit targets as far away as Washington.
As such, it brings Trump ever closer to an agonizing dilemma: If diplomacy continues to fail, it could require one of the most consequential decisions on military action taken by a president since the end of World War II.
He would either have to accept the notion that North Korea could tip an intercontinental ballistic missile with a nuclear payload and hit the US homeland, or he would have to contemplate military action to dismantle, in the knowledge that doing so could kill thousands of civilians and US troops in Asia and has long been deemed unthinkable.
"We are within a year away from North Korea completing its nuclear program," said Sue Mi Terry, a former CIA North Korea analyst who is now at the Center for Strategic and International Studies. 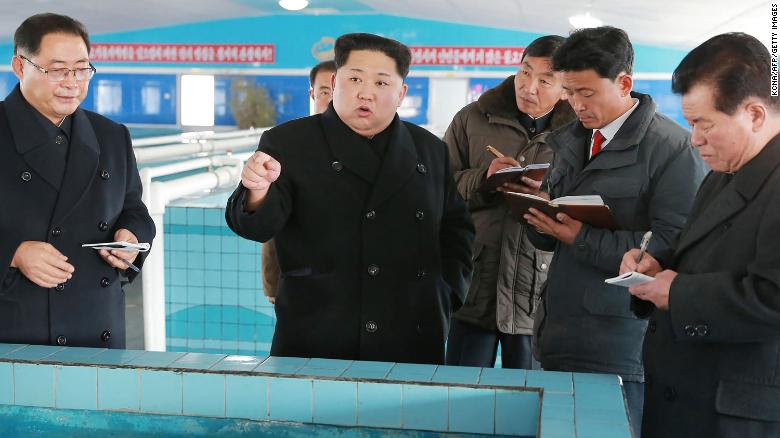 Trump on North Korean missile launch: 'We will take care of it'
"I am afraid this is their goal," said Terry on CNN International.
Republican Sen. Lindsey Graham, who has spoken in depth with Trump on the nuclear showdown, delivered a dire warning about the consequences of North Korea's current path -- conscious that top regime officials watch CNN.
"If we have to go to war to stop this, we will," Graham told CNN's Wolf Blitzer on "The Situation Room." "We're headed towards a war if things don't change."
Graham also implored regional powers, such as China, and allies like South Korea and Japan to find a solution to the crisis, admitting that hundreds of thousands of people in Asia could die in a war with North Korea, though the US would win.
"If President Trump has to pick between destroying the North Korean regime and the American homeland, he's going to destroy the regime," he said.
In a further sign of the deepening emergency, and in a chilling echo of a previous Cold War age, Hawaii prepared to test its air attack warning siren system, for the first time in a quarter of a century. 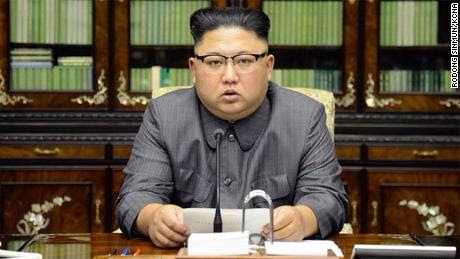 Pentagon: North Korea launches missile 02:31
Strategically, Tuesday's missile test left Washington with tough questions.
For instance, the nighttime dispatch of the missile at short notice might have been calculated to show the US that North Korea's forces could outwit any future American attempts to hit a nuclear missile on the launchpad.
It appears to dampen several hopeful interpretations of the recent pause in Pyongyang's missile tests, including the suggestion that Kim was sending a signal he was ready to negotiate with the US.
Tuesday's events also contradicted arguments circling in conservative media that Trump's tough talk, including his dismissal of Kim as "Rocket Man," had convinced North Korea to blink.
They suggest that several recent US and international initiatives are having little impact, including the US redesignation of North Korea as a state sponsor of terrorism last week and tough new sanctions imposed by the UN Security Council in September after the North's most recent nuclear test.
The latest challenge from North Korea also compromises hopes that Trump's Asia tour, which was hailed as a stunning success by his White House, had done anything to defuse the worsening showdown with the Stalinist state. 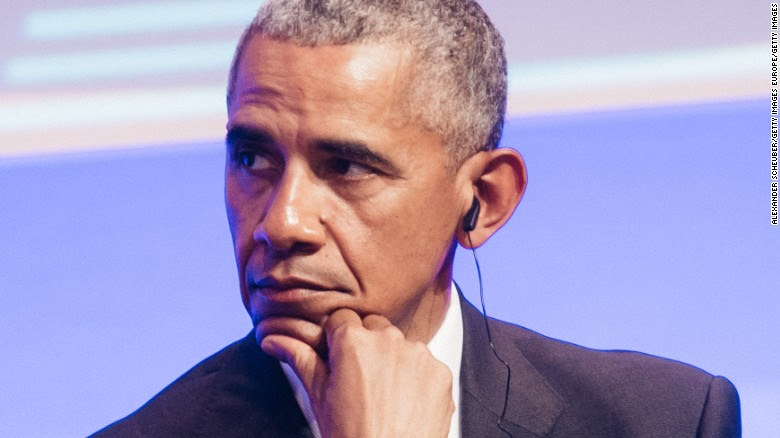 Obama to meet with China's Xi during 3-country trip
There will now be renewed focus on the administration's fervent appeals to China to solve the crisis for the US by leaning heavily on on its recalcitrant neighbor. The next few days will show whether Trump's lavish praise of Chinese President Xi Jinping will yield a meaningful shift in China's position on the crisis -- perhaps through a coordinated response gamed out with Trump during his talks this month in Beijing.
Many regional analysts, however, doubt that US pressure on China to do more -- possibly by entirely choking off North Korea's energy supplies -- will work, since Beijing's national interests mitigate any action that could risk the downfall of the regime and the reunification of a pro-American Korean state.
A recent trip to Pyongyang by a Chinese envoy did little to ease the situation, and Kim and Xi have no relationship.
In one intriguing dimension of the diplomatic puzzle, former President Barack Obama announced an international trip on Tuesday -- that will include talks in Beijing with Xi. Any notion that Obama could either carry a message for Xi, or unofficially intercede on Trump's behalf as a respected former president, seems farfetched, however, given the current President's disdain for his predecessor.
In Trump's defense, his failure so far to halt North Korea's nuclear and missile threat puts him in a club with Obama and his predecessor George W. Bush, who were similarly unsuccessful during their terms.
But the fateful moment when North Korea crosses the threshold of having the capacity to deliver a nuclear weapon to US soil will come on his watch. 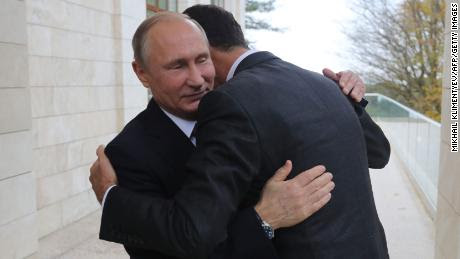 Trump: We had 'great call' with President Putin 02:39
In the short term, the predictable machinery of international diplomacy is already swinging into action with ritual condemnations from world powers. Trump spoke to Japanese Prime Minister Shinzo Abe and South Korean President Moon Jae-in Tuesday evening US time. US envoy to the UN Nikki Haley and her counterparts from Japan and South Korea have requested an emergency Security Council meeting for Wednesday.
Former Secretary of State John Kerry said Tuesday that the idea that diplomacy has failed is false.
"There's a false narrative about North Korea that has been purposefully promulgated ... that somehow diplomacy has failed, and therefore it is only 'fire' and 'fury' that is going to meet this challenge and be effective," said Kerry, a Democrat who served in the Obama administration.
But there is a genuine sense in Washington, from Capitol Hill to the White House, that options that center on more sanctions may be running out of time, given their limited impact on North Korean behavior.
That leaves Trump contemplating steps that fall short of direct military action but could significantly change the US approach.
One option would be to launch an intense new diplomatic push, possibly to offer North Korea the prospect of a radically altered relationship with the United States and its allies, and finally a peace treaty to formally end the 1950-53 Korean War.
But key players in the administration are skeptical that Kim could be trusted to live up to any new commitments that could emerge from a diplomatic grand bargain given his country's past record. And the White House position that Pyongyang must first denuclearize its arsenal is likely to be a nonstarter for North Korea.
Trump could intensify the pace of US military exercises off the North Korean coast -- but tensions are so high there are fears that miscalculations could spark conflict.
Another option would be to abandon attempts to persuade China to do more and try to force more significant action, including by directly sanctioning major Chinese banks and energy firms that do business with North Korea.
Such a step is as likely to backfire and provoke a crisis in US-China relations as to meaningfully change China's approach, however. The fact that it is even a possibility shows the limited and unappealing options open to Trump.
Posted by intuitivefred888 at 10:25 AM

Email ThisBlogThis!Share to TwitterShare to FacebookShare to Pinterest
Labels: We are closer to nuclear war than at any time since Cuban Missile Crisis in 1962