NSA planned to discredit radicals over web-porn use 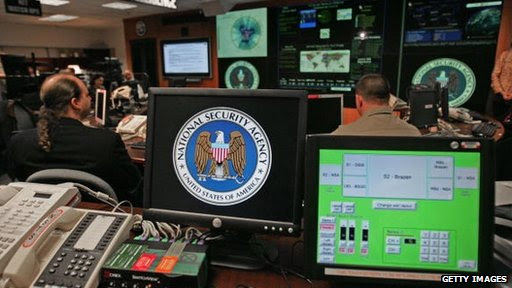 The US authorities have studied online sexual activity and suggested exposing porn site visits as a way to discredit people who spread radical views, the Huffington Post news site has reported.
It published a document, leaked by former National Security Agency contractor Edward Snowden, identifying two Muslims said to be vulnerable to accusations of "online promiscuity".
An official said this was unsurprising.
But campaign group Privacy International called it "frightening".
"Without discussing specific individuals, it should not be surprising that the US government uses all of the lawful tools at our disposal to impede the efforts of valid terrorist targets who seek to harm the nation and radicalise others to violence," Shawn Turner, director of public affairs for National Intelligence, told the Huffington Post.

Microsoft is considering rolling out new encryption initiatives, according to a report in the Washington Post.
It says Microsoft is concerned about a programme called Muscular alleged to involve the NSA and GCHQ working together to intercept data from the private cables connecting companies' computer servers.
"These allegations are very disturbing," said Brad Smith, general counsel at Microsoft.
"If they are true these actions amount to hacking and seizure of private data and in our view are a breach of the protection guaranteed by the Fourth Amendment to the Constitution."
Google and Yahoo have already announced similar encryption moves.
By digitally scrambling the information, the companies would make it harder for the agencies to make sense of intercepted files, potentially making the cyber-spies more reliant on formal requests.
However, both the NSA and GCHQ are also known to be working on counter-encryption efforts.

Privacy International said: "This is not the first time we've seen States use intimate and private information of an individual who holds views the government doesn't agree with, and exploit this information to undermine an individual's message."
The report came shortly after a group of United Nations experts adopted a "right to privacy" resolution.
The UN's Human Rights Committee said it was "deeply concerned at the negative impact" the interception of data "including extraterritorial surveillance" could have "`in particular when carried out on a mass scale".
The resolution will be passed by the UN's General Assembly before the end of the year, but is largely symbolic since it is not legally binding.
'Sexually explicit' The latest of Mr Snowden's leaked document is dated October 2012 and says it was distributed by the office of the director of the NSA to other US government officials.
It names six Muslims whom it describes as "prominent, globally resonating foreign radicalisers" about whom surveillance efforts had revealed potential "vulnerabilities that can be exploited".
It says the information is largely based on gathered "Sunni extremist communications", including material sourced by the FBI. 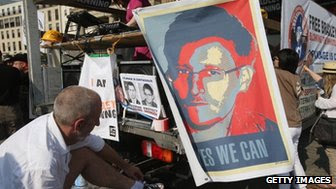 Edward Snowden's leaks have prompted anti-surveillance demonstrations in several countries
"Some of the vulnerabilities, if exposed, would likely call into question a radicaliser's devotion to the jihadist cause, leading to the degradation or loss of his authority," it says.
One example is evidence of the target "viewing sexually explicit material online or using sexually explicit persuasive language when communicating with inexperienced young girls".
Others include proof of the target:
None of the six individuals who appear in the report are accused of being directly involved in terrorism.
But the document says one of the two said to have been involved in "online promiscuity" had previously been imprisoned for inciting hatred against non-Muslims, and the other had been involved in promoting al-Qaeda propaganda.
Of the four other targets, one is said to be vulnerable to being exposed for being "attracted to fame" and another for having a "glamorous lifestyle". 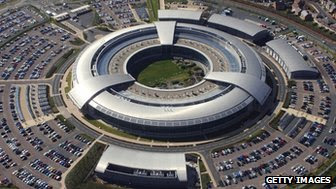 GCHQ says its own net surveillance efforts are authorised and proportionate to the threat of terrorism
Privacy International spokesman Mike Rispoli said: What is frightening about the NSA's capabilities are that they collect massive amounts of information on everyone, including your political beliefs, contacts, relationships, and internet histories.
"While these documents suggest this type of personal attacks are targeted in nature, do not forget that the NSA is conducting mass surveillance on the entire world and collecting a vast amount of information on nearly everyone."
A spokeswoman for the NSA's UK equivalent - GCHQ - declined to comment on details of the Huffington Post's report.
But she highlighted the UK government's Counter-Terrorism Strategy, which discusses using the internet to gather evidence against individuals in order to challenge terrorist propaganda.
"All of GCHQ's work is carried out in accordance with a strict legal and policy framework which ensures that its activities are authorised, necessary and proportionate, and that there is rigorous oversight," she added.

More on This Story

Email ThisBlogThis!Share to TwitterShare to FacebookShare to Pinterest
Labels: NSA planned to discredit radicals over web-porn use