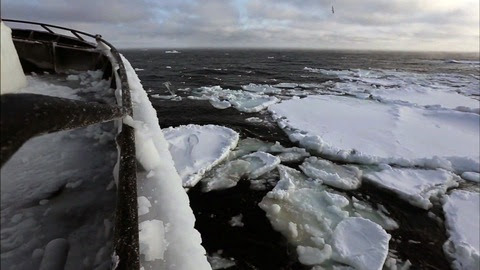 Melting glaciers mean more water to explore and profit from in the Arctic, but it can also mean danger for mariners. Photo by NewsHour
HALIFAX, Nova Scotia -- The U.S. military is looking for ways to expand operations in the vast waters of the Arctic as melting ice caps open sea lanes and other nations such as Russia compete for the lucrative oil and gas deposits. But the effort will take money and resources to fill the broad gaps in satellite and communications coverage, add deep-water ports and buy more ships that can withstand the frigid waters or break through the ice.
There are no cost or budget estimates yet. But by the end of this year, the Navy will complete plans that lay out what the U.S. needs to do to increase communications, harden ships and negotiate international agreements so that nations will be able to track traffic in the Arctic and conduct search-and-rescue missions when needed.
En route to a security conference here Thursday, Defense Secretary Chuck Hagel said climate change, energy resources and security issues revolving around the Arctic will continue to grow in importance, particularly as the melting ice opens a new polar sea lane.
"That's going to give many new opportunities to countries, to the world," Hagel told reporters traveling with him to the conference where the Arctic was expected to be a topic of discussion. "That will come with new challenges as well. So the United States needs to be very active in this group and be very involved."
President Barack Obama in May unveiled a 13-page U.S. strategy for the Arctic, asserting that nations must protect the region's fragile environment and keep it free from conflict. At the same time, however, the U.S. wants to make sure it is not left behind as countries like Russia, China, Canada and Norway map out plans ranging from gas and oil exploration to research and military exercises.
U.S. officials estimate the Arctic holds 13 percent of the world's undiscovered oil reserves and 30 percent of undiscovered gas deposits. Until recently, however, areas that could reap hundreds of billions of dollars in revenues were frozen over and unreachable.
Experts now say the Arctic waters could see largely ice-free summers as early as 2030, and there could be ice-free conditions for as long as a month by the mid-2020s. Ice-free means that about 10 percent of the water is ice-covered.
Already, maritime traffic through the Bering Strait shot up by about 50 percent between 2005 and 2012. Last year, 483 ships moved through the strait, some picking up cargo in the Arctic and taking it out, others using icebreakers to travel across the Arctic through what's called the Northern Sea Route. Officials estimate they will continue to see a 10 to 20 percent increase each year in ship traffic through the region.
"We're looking at a pretty dramatic increase in shipping, and that brings into play the concern by the Arctic nations - how do they respond to emergencies, search and rescue and people that get into trouble up there," said Rear Adm. Jonathan White, who is the Navy oceanographer and director of the Navy's task force on climate change.
Speaking at his office in the U.S. Naval Observatory, White said the Navy needs to determine what it needs to invest in now in terms of training, doctrine and types of ships, aircraft and communications. He said if the U.S. wants to operate various ships or aircraft in the region by 2025, the question becomes: "What do I have to start thinking about now - about research, planning, making long-term investments for things like hull strengthening or bridge insulation, even how we conduct routine operations like ship and aircraft refueling?"
Right now the Coast Guard has just two working icebreaker ships. Navy leaders are happy to rely on the Coast Guard for that capability but say Navy ships will also need improvements, including hardened hulls and better insulation, in order to operate in the frigid, icy waters.
Search-and-rescue operations could be in greater demand in the coming years as more cruise ships and smaller vessels sail into Arctic waters, giving patrons a close-up view of wildlife and icebergs. If a ship gets stuck or has a problem, U.S. officials say they need to be able to locate and talk to the ship's crew and have ways to deliver supplies or aid to those on board.
The other key issue is the enormous amount of resources in the Arctic, including large stores of oil off the Alaska coast.
In 2007, a Russian research ship placed a Russian flag on the bottom of the Arctic Ocean near the North Pole in a symbolic gesture. And just last month, Russian President Vladimir Putin said the Arctic was essential for his country's economic and security interests. He noted that work was underway to restore a major Soviet-era military base on the New Siberian Islands that had been shut down.
China has also joined the jousting, sending its first icebreaker ship through the Arctic last year, even though China doesn't abut Arctic territory.
Associated Press reporter Lolita C. Baldor wrote this report. Follow her on Twitter at @lbaldor.
Read more: