What will happen to the Comet of the Century?

Ison: Critical time for 'comet of the century'

Astronomers are anxiously waiting to see if a comet survives its encounter with the Sun. Comet Ison will reach its closest approach to our star at approximately 18:35 GMT on Thursday.
COMET ISON's sun dive climax: RENDEZVOUS with DESTINY
Comet races toward Thanksgiving flyby
Comet ISON arrives at perilous encounter - by Deborah Netburn

Ison: Critical time for ‘comet of the century’ 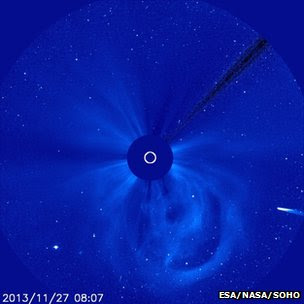 Astronomers are anxiously waiting to see if a comet survives its encounter with the Sun.
Comet Ison will reach its closest approach to our star at approximately 18:35 GMT on Thursday.
It has been billed as a potential "comet of the century", but the Sun's heat and gravitational tug could destroy it before it has a chance to light up the skies.
Some scientists believe it is already starting to buckle under the onslaught.
Prof Tim O'Brien, associate director of the UK's Jodrell Bank Observatory, said: "It's like throwing a snowball into fire. It's going to be tough for it to survive.
"But luckily, it's a big object and it moves fast, so it won't spend too much time close to the Sun. There is a lot of uncertainty."
Comet Ison came from the Oort Cloud, a mysterious, icy region at the furthest reaches of our Solar System.
It has been hurtling towards the Sun, travelling at more than a million kilometres an hour.

Now it is entering the most perilous stage of its epic journey.
It will pass the Sun at a distance of just 1.2 million km, effectively grazing its surface.
Prof Mark Bailey, from Armagh Observatory in Northern Ireland, said: "It's going to be exposed to the worst that the Sun can throw at it.
"It will be getting exposed to more and more intense solar heat, and that will start to sublimate the ices (turning them into gas) at an increasing rate."
The Sun's intense gravitational field produces tidal forces that will also have a major effect on the comet.
Scientists fear it could follow the path of Comet Lovejoy, which broke apart after it passed near the Sun in 2011. Or it could run out of fuel and fizzle out. It is hoped Ison's large size could protect it. 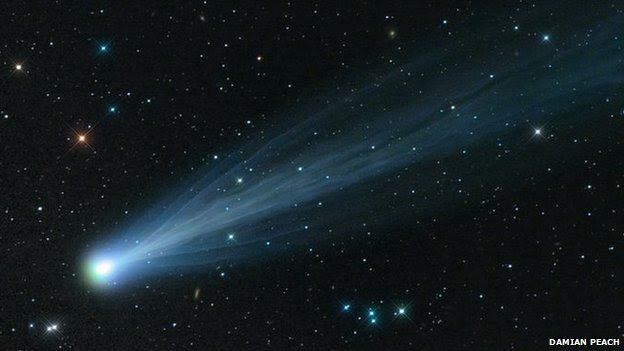 This photo of Ison was taken by Damian Peach with a 20cm telescope on 15 November
Astronomers estimate that its nucleus could be several kilometres in diameter, helping it to withstand the solar assault.
If it does remain largely intact, the heat from the Sun will excite the dust and gas in its core, allowing it to blaze a trail across the night skies. But whether it really will be a "comet of the century" is unclear.
"If it survives, the best chance of seeing it will be in early December," explained Dr Robert Massey from the Royal Astronomical Society.
"I very much doubt Ison is going to be the sort of object where you go out in the morning, just before sunrise, and see this amazingly spectacular thing across the night sky.
"It's much more likely, at the optimistic end, that it's visible with the naked eye, and with binoculars - you could see the comet's head and a nice long tail coming from that."
There has been some debate already about whether Ison is starting to break up, and telescopes such as the Esa/Nasa Soho Sun-observing satellite will be trained on the star during the approach.
"There is a lot of uncertainty, but it's going to be exciting to watch," added Prof O'Brien.

Ison: Critical time for 'comet of the century'

Email ThisBlogThis!Share to TwitterShare to FacebookShare to Pinterest
Labels: What will happen to the Comet of the Century?