Sanders: Harris' plan is not 'Medicare for All'

Williamson: Reparations would be economic stimulant

Buttigieg: I'm not scared of Trump

Poll: A majority of voters think Trump is a racist

It was Warren and Sanders vs. the rest at the debate

Sanders: Harris' plan is not 'Medicare for All'

Williamson: Reparations would be economic stimulant

Buttigieg: I'm not scared of Trump

Poll: A majority of voters think Trump is a racist

It was Warren and Sanders vs. the rest at the debate

(CNN)During Tuesday's CNN Democratic debate in Detroit, Google tracked which of the 10 candidates on stage were being searched the most on its platform during the proceedings. In Montana, it was home state Gov. Steve Bullock. In the other 49 states? Marianne Williamson.
Which begs the question: Who the heck is Marianne Williamson? And why are people sointerested in her?

THE POINT -- NOW ON YOUTUBE!
In each episode of his weekly YouTube show, Chris Cillizza will delve a little deeper into the surreal world of politics. Click to subscribe!
The short answer is that Williamson is one of the 24 candidates running for the Democratic nomination for president in 2020.
The longer answer is well, long. And amazing.
Williamson made her name as a self-help author and spiritual guru/adviser. According to Amazon, seven of her dozen books have made The New York Times bestseller list and four went all the way to No. 1.
In the broadest strokes, Williamson preaches a sort of semi-secular gospel of love. (Her most recent book, called "A Politics of Love" and released in April 2019, "confronts the cancerous politics of fear and divisiveness threatening the United States today, urging all spiritually aware Americans to return to—and act out of—our deepest value: love.")
Throughout her decades of writing and speaking -- Williamson is 67 -- she has attracted a considerable following, particularly in the celebrity set.
A 1991 Vanity Fair profile of Williamson described her this way:
"Marianne Williamson is not only the guru of the moment in Hollywood and a growing sensation in New York, but also a leading spokeswoman for a quasi-religious phenomenon that is making waves around the country."
Williamson has been a spiritual adviser to Cher. Bette Midler is a devotee. Gwyneth Paltrow, in a Goop podcast interview with Williamson last year, called Williamson a "spiritual legend." Williamson officiated Elizabeth Taylor's marriage to her seventh husband -- shout out Larry Fortensky!! -- at Michael Jackson's Neverland ranch. (Taylor and Fortensky divorced after five years.)
Williamson has also had some peripheral connection to politics. In late 1994, Williamson was one of a handful of new age spiritual gurus invited to Camp David by Bill and Hillary Clinton as the president and first lady sought to grapple with the massive losses for Democrats in the midterm elections and find a new way forward over the second half of his first term.
Two decades later, Williamson decided to enter politics in her own right, running as an independent for the open 33rd district in California -- a congressional seat that includes hugely affluent communities like Santa Monica, Malibu and Brentwood.
Williamson's celebrity devotees turned out in droves. Nicole Richie, Katy Perry and, yes, Kim Kardashian have all supported her. Alanis Morissette wrote a song for her campaign. This is true! It's called "Today."
All told, Williamson raised about $2 million for her candidacy. Didn't matter. She came in fourth in the race, with nearly 13%. (Democratic Rep. Ted Lieu won the primary and still holds the seat.)
Five years after that loss, Williamson was back at it, announcing for president in January 2019. Thanks to her celebrity in some circles, Williamson has raised more than $3 million for her candidacy from donors across the country, which was good enough to qualify her for the first two presidential debates.
Which is where the legend of Marianne Williamson, political oddball and -- maybe -- truth-teller, has taken root.
Watch five minutes of either of the first two presidential debates that Williamson has participated in and she stands out like a sore thumb. While the other nine candidates on stage are vying to interrupt one another at every turn and deliver their scripted talking points, Williamson is speaking in global -- and beyond -- terms. And all of it done in her totally recognizable and totally unplaceable accent.
Take her closing statement in the first debate in Miami, in which she directly addressed President Donald Trump:
"So Mr. President, if you're listening, I want you to hear me please: You have harnessed fear for political purposes, and only love can cast that out," she said. "So I, sir, I have a feeling you know what you're doing. I'm going to harness love for political purposes. I will meet you on that field, and sir, love will win." 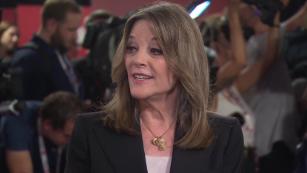 How Marianne Williamson's background sets her apart02:21
Or her invocations in Tuesday's debate of "dark psychic forces" at work in the world and the "emotional turbulence" surrounding the US electorate. (Google noted that search for the phrase "dark psychic forces" went through the roof on Tuesday night.)
While Williamson's oddness is likely behind much of the search interest in her during these debates, she has also made several very key points about the state of the country and the race.
Williamson was exactly right when she said that you don't beat Donald Trump with a series of policy proposals alone. And her answer on reparations for the descendants of African slaves drew huge applause from the audience at the Detroit debate.
Let's be clear: Marianne Williamson isn't going to be the Democratic nominee for president. But she's already made the race a hell of a lot more interesting.
Posted by intuitivefred888 at 8:24 PM

Email ThisBlogThis!Share to TwitterShare to FacebookShare to Pinterest
Labels: Marianne Williamson is the newest internet darling