To read a full article regarding the pepper spray incident copy and paste following article at nytimes.com:

“The courts have made it very clear that these type of devices can’t be used indiscriminately and should be used only when the target poses a physical threat to someone,” said Michael Risher, staff attorney for the A.C.L.U. of Northern California.
To Kamran Loghman, who helped develop pepper spray into a weapons-grade material with the Federal Bureau of Investigation in the 1980s, the incident at Davis violated his original intent.
“I have never seen such an inappropriate and improper use of chemical agents,” Mr. Loghman said in an interview. end quote from above article.

Since Pepper spray interferes with breathing and causes temporary blindness, unless someone is attacking a policeman or woman or man directly this pepper spray should never be used because if the agent isn't washed out of the eyes and nose and mouth and face of the one pepper sprayed immediately, blindness or death of the person might take place, especially if they are handcuffed as in this case. Blindness becoming permanent if the person sprayed isn't allow because of handcuffs to wash out their eyes, nose and face. Death could occur if inflammation of soft tissues in nose or throat become inflamed so the person cannot breathe. Another problem that could cause death is from an allergic reaction to pepper spray.

begin 2nd quote from above article:

Pepper spray — its formal name is oleoresin capsicum, or O.C. spray — finds its power in an inflammatory agent that occurs naturally in more than 300 varieties of peppers, including cayenne, and that vary by their degree of hotness. (Black pepper is not part of the capsicum family.) When sprayed in someone’s face, it causes an intense burning sensation of the eyes, resulting in temporary blindness, and restricts breathing, induces coughing and leaves the person at least temporarily incapacitated.
Pepper’s use as a deterrent dates to the ancient cultures in China and India, which sometimes used it in war, sometimes for torture. Because it was effective, cheap and widely cultivated, pepper persisted as a weapon through the ages, mostly for self-defense. Some Japanese women kept it tucked into their kimonos in case a man made aggressive advances. end quote.

So this weapon has always been used as a defensive weapon and not for offense really until this public situation. This is why it is drawing so much attention. If police continue to use it around the country in this way it is only a matter of time before a demonstrator dies in an unfortunate incident.

The following is a picture of one of the deaths at Kent State with the officer spraying pepper spray on a screaming grieving student finding a friend shot to death. This is the kind of reaction to the pepper spray being found on the internet now. 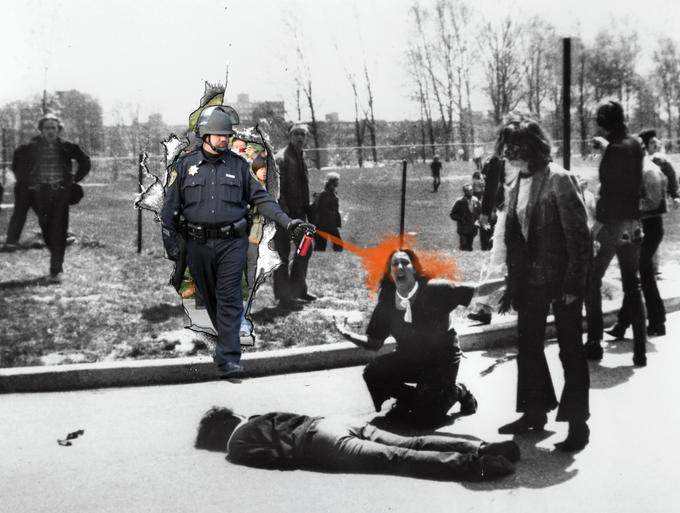