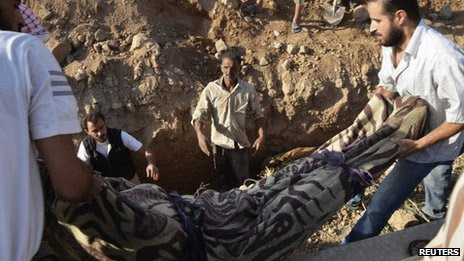 The apparent use of chemical weapons in the suburbs of Damascus, killing hundreds of civilians, has clearly lifted the Syrian conflict to a yet higher level of crisis.
With the US stiffening its military posture in the eastern Mediterranean and the Russians continuing to defend their only staunch Arab ally, the dire predictions made months ago by some regional analysts that the situation could spiral rapidly into World War III are starting to look a little less fanciful.
Conversely, and for that very reason, there are those who believe that the level of tension that has now been reached may force the unblocking of the process to find a political settlement of the crisis.
Pressure to co-operate Out of the chaos and confusion of the past few days, several things have emerged clearly.
Even the regime itself and its closest allies, Russia and Iran, do not dispute that chemical weapons were used in the eastern and south-western suburbs of Damascus early on Wednesday morning. 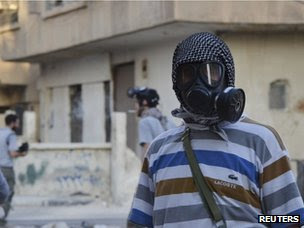 Opposition activists accuse government forces of killing between 500 and more than 1,000 civilians
The evidence from a huge flow of distressing amateur video is too massive to dismiss.
Medecins Sans Frontieres says 3,600 patients with neurotoxic symptoms were treated at three hospitals and that at least 355 of them died.
That may not be the whole picture.
The Violations Documentation Centre, the most measured and least sensationalist of the organisations logging casualties in the conflict, listed the names and details of 457 people it said died of chemical poisoning in eight Damascus suburbs on Wednesday. That too is likely to be a minimum figure.
While acknowledging the event, Russian and Iranian officials have either adopted the Syrian government line that the attacks were carried out by armed rebels, or left the issue of responsibility open.
In any event, with UN chemical weapons investigators already in Damascus on a prior mission, the pressure to allow them to examine the affected sites is hard to resist.
Both Moscow and Tehran have said they are urging the Syrian authorities to co-operate with the inspectors, and the Iranian foreign minister has quoted his Syrian counterpart, Walid Muallem, as saying the government is in discussion with the UN team and preparing the conditions for a site visit.
The situation also prompted a rare direct contact between Mr Muallem and the US Secretary of State, John Kerry.
Obama reluctant With combat continuing on the ground in the affected areas, there is clearly scope for prevarication and delay, although Western patience is short.
But at least an appearance of regime willingness to co-operate may for the moment let the US and its allies off the hook. 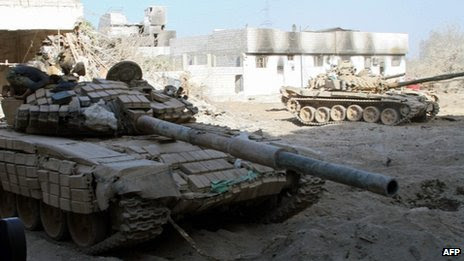 Troops are continuing their offensive on rebel strongholds outside Damascus
For one of the other elements that has become clearer than ever in the past few days is the great reluctance of President Barack Obama and others to plunge into an embroilment that would be hard to get out of, and which would carry a very high risk of aggravating the situation even further.
For the West, an almost irresistible sentiment that something has to be done is colliding with the reality that there is no course of action that is attractive or even acceptable in terms of that risk.
Mr Obama also knows that his own public does not want another costly, open-ended adventure in the Middle East.
Limited options Any military action would immediately bracket the West with Israel, whose air and missile strikes on Syria this year have been held up by the regime as evidence that its internal troubles are part of a Western-Zionist-Salafist plot to destroy a citadel of resistance to Israel.
Even the most minimalist response - stepping up arms and training to opposition forces - does not really amount to much of an option.
The Western powers have never wanted the rebels to win. 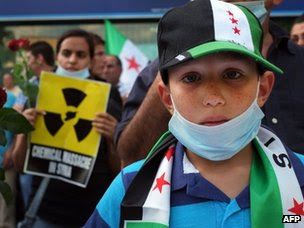 The US and UK insist "significant use of chemical weapons would merit a serious response"
Their strategy has been to redress the balance so that the regime came under such pressure that it would cave in, dump the Assad leadership and negotiate a transition that would exclude the inner ruling circle while preserving stability and state structures.
There has never been evidence to suggest such an approach might work.
The signs have always been that the regime would pull the whole house down around it before capitulating, and also that its strategic allies, especially Russia, Iran and Hezbollah, would not allow that to happen.
In addition, the West faces the reality that the moderate opposition elements it has been trying to boost have proven neither cohesive, credible nor effective on the ground.
Instead, the running has largely been made by Islamist factions, many linked to al-Qaeda.
Political movement As happened in Iraq, intervention by the West risks fragmenting the country further, creating an uncontrollable situation and handing large parts of it to forces it regards as its enemies.
To that extent, there may be more common ground between Washington and Moscow than meets the eye. 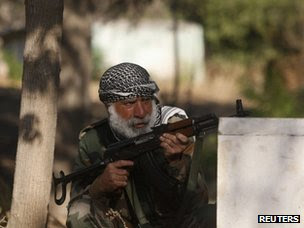 The US and Russia have failed to convene a meeting to negotiate a political solution to end the fighting
The Russians, traumatised by Chechnya, are also mesmerised by the prospect of a radical Islamist takeover in Syria.
That is why some observers believe there is still a measure of understanding between the Russians and Americans, whose foreign ministers decided in May to work together to bring about the political settlement that everybody agrees is the only solution, but which is proving devilishly difficult to get under way.
So it is not out of the question that the huge pressures exerted on all parties by the chemical weapons attacks might just be enough to pop the cork and force movement towards negotiations, with the latest speculation focusing on Geneva in October.
Any such prospect, distant though it may seem, would clearly be set back by Western military action.
An eventual formula where regime forces join with elements of the Free Syrian Army to expel or crush the Islamist radicals is not beyond imagination.
The alternatives to political movement are starker than ever.
But that has always been the case, and it has not prevented the crisis from moving from one worst-case scenario to the next.

'Chemical attack': What we know 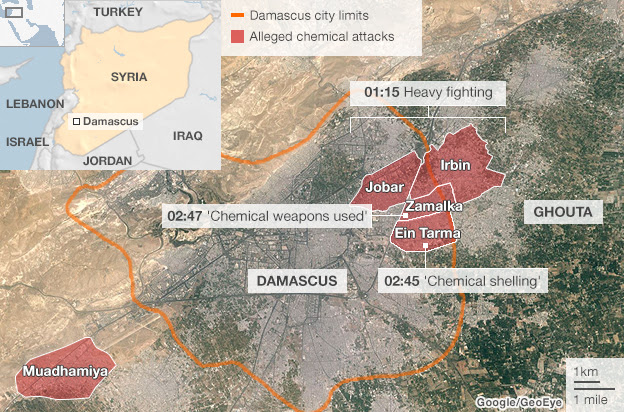 Email ThisBlogThis!Share to TwitterShare to FacebookShare to Pinterest
Labels: Syria attack may force search for peace