Can oil bounce back as OPEC meets?

Can oil bounce back as OPEC meets? 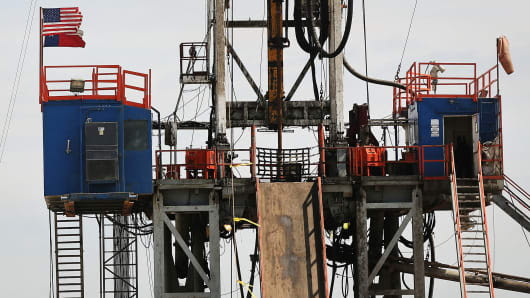 Getty Images
An oil platform drill outside of Gonzales, Texas.
Crude oil prices have been tumbling for much of the year as a supply glut, strong dollar, and geopolitical developments around the world continue to exert pressure.
Just last week, oil prices saw an uptick as the ongoing conflict in the Middle East escalated after Turkey shot down a Russian warplane it claimed strayed into its airspace. Russia is one of the world's largest oil producers.
On Monday, during Asian trade, oil prices saw marginal uptick after falling over 1 percent on Friday. U.S. crude was up 18 cents, trading at $41.88 a barrel while the internationally traded Brent was up 4 cents at $44.90 a barrel.
Energy companies have been steadily cutting costs, projects, and jobs to cope with falling revenues as a result of lower oil prices. Earlier in the year, several big companies announced their intention to slash their global workforce to stay afloat - Royal Dutch Shell said it expected to cut 6,500 jobs.
Investors will be closely watching a meeting between the Organization of the Petroleum Exporting Countries (OPEC) in Vienna later this week, as they decide on policies to tackle the global supply glut which is keeping oil below the $50 benchmark.

Oil is going back to $100: Strategist
Earlier this month, the Saudi minister for petroleum and mineral resources, Ali bin Ibrahim Al-Naimi, said at a conference in Bahrain that Saudi Arabia is ready to cooperate with other oil producers to stabilize the market.

Saudi Arabia is one of the largest exporter of petroleum.

"The Saudis kept production as high as they did, above 10 million barrel. This time around, they sounded a little bit more in the direction that they may consider cutting back a little bit," he said, adding, "But I'm not holding my breath just yet."

As the market remains volatile, in this week's trader poll tell us where you see oil prices heading in the medium term.

Where do you see oil prices heading in the medium term?

Email ThisBlogThis!Share to TwitterShare to FacebookShare to Pinterest
Labels: Can oil bounce back as OPEC meets?