(CNN)The crying coming from under a block of asphalt sounded like it was from a cat to Angelica Blount. But it turned out to be an abandoned baby that police say was deliberately buried under debris along a Los Angeles area walking path.
Blount was walking in Compton on Friday, when her sister Evangelina McCrary pointed the sound out to her.
"She told me, 'Can you hear the baby crying?'" Blount told CNN affiliate KABC. "And I said, 'I don't know; it might be a cat.' And my sister said, 'No, it's a baby crying.'"
They called 911.
Two deputies from the LA Sheriff's Department found the newborn under pieces of asphalt and debris inside a crevice. 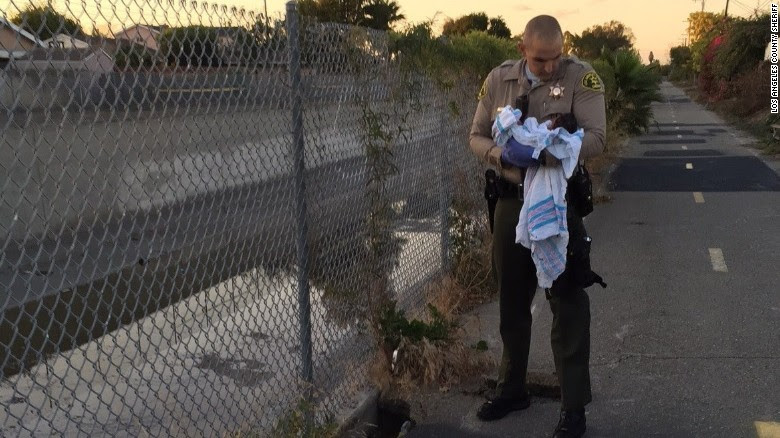 Newborn was found under asphalt along popular Compton walking path
She was "cold to the touch" and wrapped in what appeared to be a hospital blanket, the sheriff's office said.
"There's indications that the child was born at a medical facility or at a hospital...because of the blanket," LA Sheriff's Dept. Sgt. Marvin Jaramilla told journalists on Saturday.
Paramedics treated her at the scene before transporting her to the hospital where she's listed in stable condition.
Police say the baby girl was born within the last 36 to 48 hours. She's lucky to be alive.
"We do know that if the child had spent the night there in those conditions the baby wouldn't have survived," Sgt. Jaramilla said. If the parents are found, they will face attempted murder and child endangerment charges.
Los Angeles County has a so-called "Baby Safe Surrender Program" that provides parents the option to hand their baby over at any LA county hospital or fire station, no questions asked.
"I don't know how someone would just dump the baby and throw them in that hole and forget about it," resident Angel Flores told KABC.
CNN's Amanda Watts and Andy Rose contributed to this report
end quote from:

(CNN) The crying coming from under a block of asphalt sounded like it was from a cat to Angelica Blount. But it turned out to be an abandoned baby that police say was deliberately buried under debris along a Los Angeles area walking path.
Newborn Girl Found Buried Alive Near Compton Riverbed
See realtime coverage »