While all weapons are dangerous, cluster bombs pose a particular threat to civilians for two reasons: they have a wide area of effect, and they have consistently left behind a large number of unexploded bomblets. The unexploded bomblets can remain dangerous for decades after the end of a conflict.
Cluster munitions are opposed by many individuals and hundreds of groups, such as the Red Cross,[50] the Cluster Munition Coalition and the United Nations, because of the high number of civilians that have fallen victim to the weapon. Since February 2005, Handicap International called for cluster munitions to be prohibited and collected hundreds of thousands of signatures to support its call.[51] 98% of 13,306 recorded cluster munitions casualties that are registered with Handicap International are civilians, while 27% are children.[52]
The area affected by a single cluster munition, known as its footprint, can be very large; a single unguided M26 MLRS rocket can effectively cover an area of 0.23 km2.[53] In US and most allied services, the M26 has been replaced by the M30 guided missile fired from the MLRS. The M30 has greater range and accuracy but a smaller area of coverage. It is worth noting that for reasons including both danger to civilians and changing tactical requirements, the non-cluster unitary warhead XM31 missile is, in many cases, replacing even the M30.
Because of the weapon's broad area of effect, they have often been documented as striking both civilian and military objects in the target area. This characteristic of the weapon is particularly problematic for civilians when cluster munitions are used in or near populated areas and has been documented by research reports from groups such as Human Rights Watch,[54] Landmine Action, Mines Action Canada and Handicap International. In some cases, like the Zagreb rocket attack, civilians were deliberately targeted by such weapons.[55] 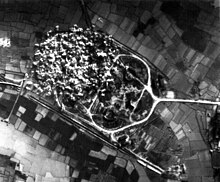 Half of a surface-to-air missile site in North Vietnam blanketed in exploding bomblets dispersed by a U.S. cluster munition, Vietnam War
The other serious problem, also common to explosive weapons is unexploded ordnance (UXO) of cluster bomblets left behind after a strike. These bomblets may be duds or in some cases the weapons are designed to detonate at a later stage. In both cases, the surviving bomblets are live and can explode when handled, making them a serious threat to civilians and military personnel entering the area. In effect, the UXOs can function like land mines.
Even though cluster bombs are designed to explode prior to or on impact, there are always some individual submunitions that do not explode on impact. The US-made MLRS with M26 warhead and M77 submunitions are supposed to have a 5% dud rate but studies have shown that some have a much higher rate.[56] The rate in acceptance tests prior to the Gulf War for this type ranged from 2% to a high of 23% for rockets cooled to −25 °F (−32 °C) before testing.[57] The M483A1 DPICM artillery-delivered cluster bombs have a reported dud rate of 14%.[58]
Given that each cluster bomb can contain hundreds of bomblets and be fired in volleys, even a small failure rate can lead each strike to leave behind hundreds or thousands of UXOs scattered randomly across the strike area. For example, after the 2006 Israel-Lebanon conflict, UN experts have estimated that as many as one million unexploded bomblets may contaminate the hundreds of cluster munition strike sites in Lebanon.[59]

M77 submunition of type fired against Lebanon in 1986. Each MLRS rocket has 644 M77 packed in the warhead
In addition, some cluster bomblets, such as the BLU-97/B used in the CBU-87, are brightly colored to increase their visibility and warn off civilians. However, the yellow color, coupled with their small and nonthreatening appearance, is attractive to young children who wrongly believe them to be toys. This problem was exacerbated in the War in Afghanistan (2001–present), when US forces dropped humanitarian rations from airplanes with similar yellow-colored packaging as the BLU-97/B, yellow being the NATO standard colour for high explosive filler in air weapons. The rations packaging was later changed first to blue and then to clear in the hope of avoiding such hazardous confusion.
The US military is developing new cluster bombs that it claims could have a much lower (less than 1%) dud rate.[60] Sensor-fused weapons that contain a limited number of submunitions that are capable of autonomously engaging armored targets may provide a viable, if costly, alternative to cluster munitions that will allow multiple target engagement with one shell or bomb while avoiding the civilian deaths and injuries consistently documented from the use of cluster munitions. Certain such weapons may be allowed under the recently adopted Convention on Cluster Munitions, provided they do not have the indiscriminate area effects or pose the unexploded ordnance risks of cluster munitions.
In the 1980s the Spanish firm Esperanza y Cia developed a 120mm caliber mortar bomb which contained 21 anti-armor submunitions. What made the 120mm "Espin" unique was the electrical impact fusing system which totally eliminated dangerous duds. The system operates on a capacitor in each submunition which charged by a wind generator in the nose of the projectile after being fired. If for what ever reason the electrical fuse fails to function on impact, approximately 5 minutes later the capacitor bleeds out, therefore neutralizing the submunition's electronic fuse system.[61] Later a similar mortar round was offered in the 81mm caliber and equipped some Spanish Marine units. But on signing the Wellington Declaration on Cluster Munitions, Spain withdrew both the 81mm and 120mm "Espin" rounds from its military units.

Ban Advocates from Afghanistan and Ethiopia demonstrating outside of the Dublin conference
Countries that have been affected by cluster munitions include:

Email ThisBlogThis!Share to TwitterShare to FacebookShare to Pinterest
Labels: Unexploded cluster bomblets worldwide but also in Syria and Yemen now