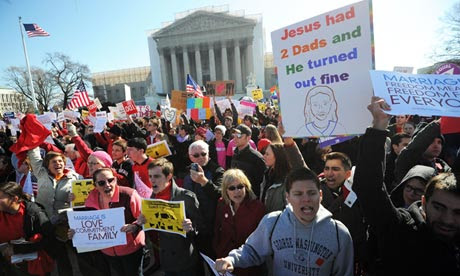 The polarisation of the supreme court was laid bare on Tuesday, the first of two days of hearings on gay marriage. Photograph: Jewel Samad/AFP/Getty Images
US supreme court justices tore into a central argument of opponents of same-sex marriage on Tuesday as the court heard for the first time arguments over whether gay couples have a constitutional right to wed.
The deep polarisation of the court on social issues was laid bare on the first of two days of hearings on gay marriage, which saw liberal justices shoot down claims that same sex-couples should not be allowed to wed because they cannot procreate, while the conservatives attacked rapid change as undermining centuries of tradition.
But none of the parties in the cases under consideration on Tuesday, involving a 2008 California referendum barring gay marriage, may get the definitive rulings they are seeking. One persistent line of questioning raised the prospect that the court will sidestep a decision on the basis that the plaintiffs – the proponents of the gay-marriage ban – do not have legal standing to bring the case after the state of California declined to do so when the referendum result was overturned by a federal court.
Neither Justice Anthony Kennedy, who is regarded as the potential swing vote on this issue, nor the liberal justices appeared eager for the court to make a sweeping ruling.
Kennedy, who said the court may be entering "uncharted waters" by deciding on who has the right to marry, also wondered aloud why the justices had agreed to hear the case. "I wonder if this case was properly granted," he said.
A second case, over a federal law preventing the government from recognising same-sex unions, is to be heard on Wednesday.
A considerable amount of the questioning from the bench on Tuesday focused on whether the central purpose of marriage is procreation. Charles Cooper, legal counsel for four Californians seeking to uphold the results of Proposition 8, barring gay marriage in the state, told the court on Tuesday that the inability of same-sex couples to have children together meant that to allow them to wed would change the historic definition of marriage.
"We are saying the interest in marriage and the state's interest and society's interest in what we have framed as responsible procreation is vital. But at bottom, with respect to those interests, our submission is that same-sex couples and opposite-sex couples are simply not similarly situated," he said.
But that position was met with deep scepticism and even derision from several of the justices. Sonia Sotomayor asked how permitting gay couples to marry interfered with procreation. She then pressed Cooper on whether his argument meant that sterile heterosexual couples should not be permitted to wed because they cannot have children.
Kagan leapt in. "Suppose a state said that because we think that the focus of marriage really should be on procreation, we are not going to give marriage licences anymore to any couple where both people are over the age of 55. Would that be constitutional?" she asked.