Another Assad Genocide of Sunni Civilians?

By ZEINA KARAM 2 hours ago

The Syrian National Coalition disputed the government report, saying the people killed were civilians trying to escape the siege imposed by President Bashar Assad's forces on suburbs of the Syrian capital.
The government and the rebels fighting to topple Assad often have conflicting reports on events and abuses in Syria. In the absence of independent media and international journalists, both camps actively try to control the narrative of the civil war.
The Syrian government said Wednesday that army troops killed 175 rebels, many of them al-Qaida-linked fighters, in an ambush described as one of the deadliest attacks by government forces against fighters near Damascus. State run media aired pictures of the aftermath, showing bodies, some of them bloodied, on the ground. Some wore military fatigues, but most were in civilian clothes with bags of belongings scattered nearby.
An opposition group, the Syrian Observatory for Human Rights, said the ambush in the eastern Ghouta region was carried out by the Lebanese Hezbollah group, which has been instrumental in helping Assad's forces push back rebels entrenched in the suburbs of the capital city. It said most of those killed where members of the al-Qaida-linked Nusra Front and other Islamic brigades.
The Syrian National Coalition said pro-Assad forces, backed by Hezbollah fighters, ambushed "a convoy of civilians fleeing the siege in eastern Ghouta." In a statement, the group called on the United Nations to carry out an independent investigation. 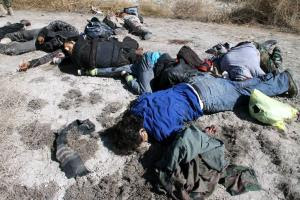 This photo released by the Syrian official news agency SANA, shows dead bodies of Syrian rebels sout …
It was not possible to verify either claim.
Syria's conflict began nearly three years ago with largely peaceful protests, and gradually transformed into civil war following a brutal military crackdown on protesters. More than 140,000 people have been killed, according to opposition activists.
On Thursday, a mortar shell landed near a hospital in a government-controlled neighborhood of the central city of Homs Thursday, killing at least five people, while a roadside bomb went off in front of the French hospital in Damascus, killing one. Syria's state-run media said.
State TV said the mortar round in Homs hit a car near the Al-Malek Hospital in the Akrama neighborhood. It said 13 people were also wounded in the attack. Akrama is predominantly home to members of Assad's Alawite sect.
Syria's opposition is dominated by the country's Sunni Muslim majority.
Also Thursday, Syrian Foreign Minister Walid al-Moallem said Syria was committed to its obligations related to the destruction of chemical weapons, despite missing two deadlines in the past two months to remove the chemicals. The U.S. has accused Damascus of using stalling tactics and the Pentagon Thursday urged Syria to move faster.
The Norwegian armed forces released footage for the first time Thursday showing an international operation to remove the agents from Syria, conducted earlier this year.

In the footage, members of a Danish-Norwegian task force are seen preparing aboard the Norwegian Frigate KNM "Helge Ingstad" as the ship approaches Latakia harbor.
The deal to remove Syria's chemical weapons was reached last year, following a chemical weapons attack near Damascus blamed on Assad's government that killed hundreds of people.
A report by the State Department said the Aug. 21 attack was the world's worst human rights violation of 2013.
___
Associated Press writer Albert Aji contributed to this report from Damascus, Syria.

Email ThisBlogThis!Share to TwitterShare to FacebookShare to Pinterest
Labels: Another Assad Genocide of Sunni Civilians?