BBC News-23 minutes ago
Security forces in Venezuela have used tear gas to break up a student demonstration in the capital, Caracas. Hundreds of protesters were ...
27 February 2014 Last updated at 21:24 ET 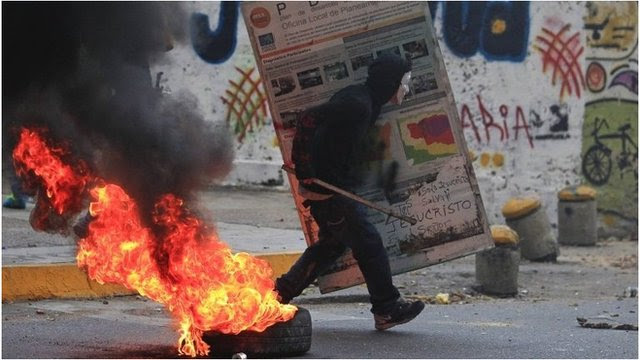 Security forces in Venezuela have used tear gas to break up a student demonstration in the capital, Caracas.
Hundreds of protesters were demanding the release of fellow students detained during two weeks of unrest, and called a fresh march for Sunday.
In another part of Caracas, a large pro-government march was held.
Earlier this week, President Nicolas Maduro declared an early start to the week-long Carnival public holiday in an attempt to end the unrest.
On Monday, Venezuela's Attorney General Luisa Ortega said 13 people had died in the violence, although President Maduro put the figure of protest-related deaths at more than 50 on Wednesday.
'No Carnival' Despite the start of the long holidays on Thursday, students again gathered in Caracas.
"There's no Carnival for anybody here. Here we are still on the streets, committed to the fight," student leader Juan Requesens told EFE news agency.
Their peaceful demonstration ended in clashes with security forces when some masked protesters tried to block a road.
Police and the National Guard used tear gas to break up the protest, while demonstrators hurled stones at them.
Mr Requesens said there would be a "big march" on Sunday.
At the presidential palace in Caracas, hundreds of Mr Maduro's supporters took part in a celebration of the 25th anniversary of the Caracazo, the violent protests against economic measures imposed in 1989 by the government.
There were no reports of other large protests in other parts of Venezuela on Thursday. 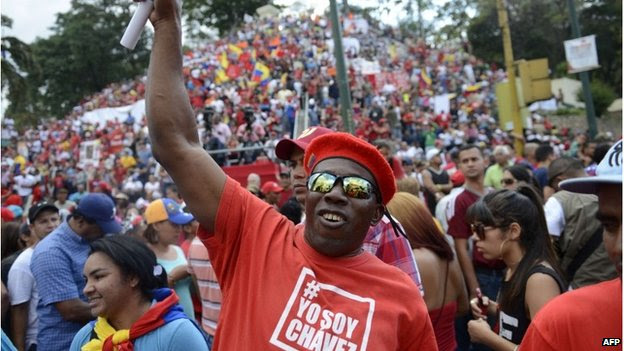 Across the city, hundreds of pro-government demonstrators marked the 25th anniversary of the Caracazo uprising
Meanwhile, Venezuelan Foreign Minister Elias Jaua, who is in Uruguay as part of a regional tour, said he believed the Union of South American Nations (Unasur) would be a better forum to discuss the current political crisis in Venezuela.
Panama had suggested the Organisations of American States (OAS) should discuss the issue, but Venezuela requested the motion to be cancelled.
"Unasur has been much more efficient on these issues than the OAS. How many coups has the OAS stopped in its existence? On the contrary, it has legitimised many," Mr Jaua told reporters.
On Wednesday, Mr Maduro held a "national peace conference" without the participation of the opposition.
The Roman Catholic church and a major business federation took part in the meeting.
The current unrest started more than two weeks ago with student protests in the western states of Tachira and Merida demanding increased security.
They also complained about record inflation and shortages of staple items.
But it soon spread to the capital and other parts of the country.
end quote from: