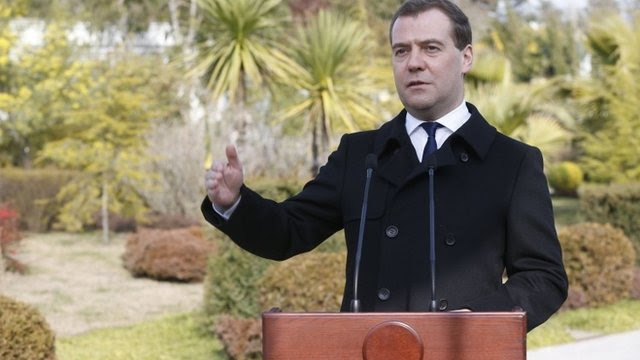 Famil Ismailov Editor, BBCRussian.com
Mr Medvedev's statement should not come as a surprise. It fits well with the Kremlin's policy of playing on Russians' nostalgia over the Soviet past and treating the West as bent on undermining the new, successful and powerful Russia.
With Ukraine out of the zone of Moscow's influence, President Putin's idea of a customs union which would bring the former Soviet republics under Russia's leadership, becomes a distant and doubtful dream.
"Defending the rights of Russians in Ukraine" is another political concept used by Moscow to promote its geo-strategic interests. The new authorities in Kiev will have to make sure that Ukraine's Russians do not feel excluded from the political process.
The concept had been used as a pretext in 2008 during the armed conflict with Georgia. Russia is now in control of its two breakaway provinces - South Ossetia and Abkhazia.
Could the same happen in Crimea? Russia could support separatist sentiments in the region. However, most experts believe that Ukraine's territorial integrity is not in danger.

MPs voted to remove Mr Yanukovych on Saturday. His whereabouts are unknown but he was reported to have been in the Crimean peninsula on Sunday.
Russia has already recalled its ambassador to Ukraine for consultation.
Unrest in Ukraine began in November when Mr Yanukovych rejected a landmark association and trade deal with the EU in favour of closer ties with Russia.
Mr Medvedev, quoted by Russian news agencies, suggested that Western countries that accepted Ukraine's new authorities were mistaken.
"The legitimacy of a whole number of organs of power that function there raises great doubts," he said.
"Some of our foreign, Western partners think otherwise. This is some kind of aberration of perception when people call legitimate what is essentially the result of an armed mutiny."
He added: "We do not understand what is going on there. There is a real threat to our interests and to the lives of our citizens."
Ukraine's foreign ministry quickly responded to Mr Medvedev's comments on Russian citizens in Ukraine, saying his concerns were "unfounded".
However, Russia's foreign ministry also issued a strongly worded statement saying a "forced change of power" was taking place in Ukraine and accused interim leaders of passing new laws "aimed at infringing the humanitarian rights of Russians and other ethnic minorities". 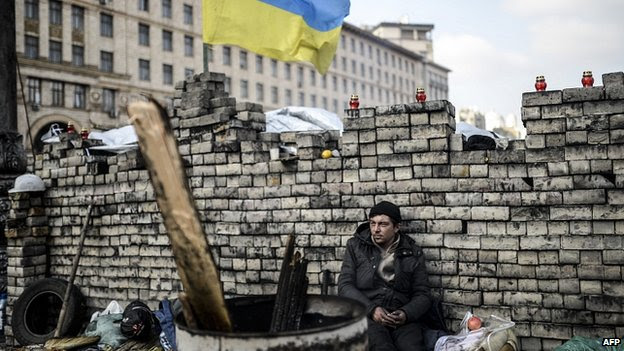 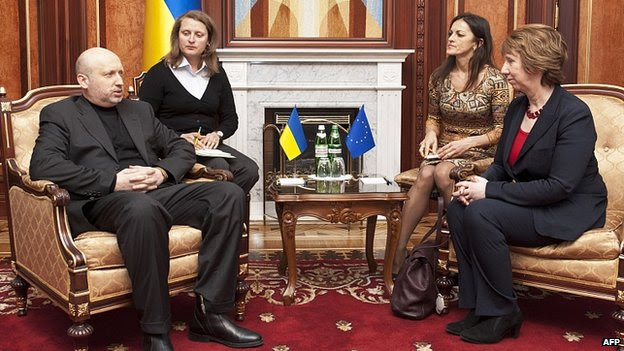 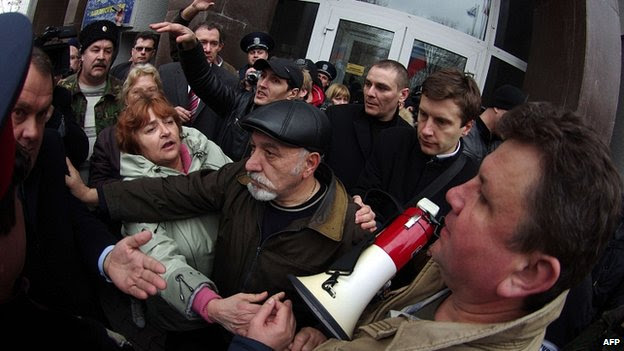 Tensions between pro- and anti-Russian demonstrators are high in Sevastopol, Crimea 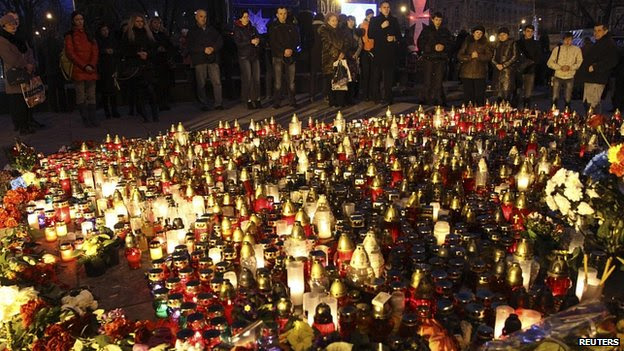 Flowers and candles have turned Kiev's Independence Square into a shrine for those killed
"A course has been set towards suppressing dissenters in various regions of Ukraine by dictatorial, and sometimes even terrorist, means," a statement said.

Who is running Ukraine?

It did not give details.
On Sunday, Ukraine's parliament reduced the official status of the Russian language by cancelling a law brought in by Mr Yanukovych.
Meanwhile, EU foreign affairs chief Catherine Ashton has been in Kiev to discuss financial and political support for Ukraine's new leaders.
Ukraine is facing bankruptcy and a promised loan from Russia is looking increasingly unlikely.
She visited Independence Square - the scene of deadly clashes between protesters and police - and held talks with Interim President Olexander Turchynov.
Also on Monday, French President Francois Hollande called his Russian counterpart Vladimir Putin to urge a peaceful transition in Ukraine.
A statement from Mr Hollande's office said he also emphasised "the importance of ensuring the unity and territorial integrity of the country".
US President Barack Obama and German Chancellor Angela Merkel have also delivered similar messages to Mr Putin in recent days.
On Monday, the US said it was ready to give financial support to Ukraine to complement any future loan from the International Monetary Fund (IMF).
Earlier, Interim Interior Minister Arsen Avakov said on Facebook that a criminal case had been opened against Mr Yanukovych and other officials over "mass murder of peaceful citizens".

Yuri Maloveryan, Kharkiv: A stand-off continues between those who back the Maidan protests and those opposed.

Continue reading the main story Daniel Sandford: Sevastopol, Crimea: This is still very much a Russian part of the world. The strongest allegiance is to Moscow, and Russia's Black Sea fleet is still in the harbour.

He said Mr Yanukovych was last seen in Balaklava on the Crimean peninsula on Sunday.
The peninsula is an autonomous region where the majority of the population is ethnically Russian.
Crimea and some pro-Russian areas in the east have seen protests against the overthrow of Mr Yanukovych, sparking fears that Ukraine could be split apart by separatist movements.
Ukraine's political leaders aim to form a new unity government by Tuesday.
Former PM Yulia Tymoshenko, who was released from jail on Saturday, has ruled out becoming prime minister. Her Fatherland party says she has accepted an offer of medical treatment in Germany.
Ukraine's health ministry says 88 people, mostly anti-Yanukovych protesters but also police, are now known to have been killed in last week's clashes.
Thousands of people remain in Kiev's Independence Square, the Maidan.
Continue reading the main story