Washington (CNN) -- We're not bluffing, the Obama administration told Afghanistan on Tuesday in announcing for the first time it has started planning for the possible withdrawal of all U.S.
Obama could pull all troops from Afghanistan
US planning full Afghan pullout, Obama tells Karzai
Readout of President Obama's Call with President Karzai
Obama warns Afghan president of full troop withdrawal
SHARE THIS

No bluff: U.S. planning possible withdrawal of all troops from Afghanistan 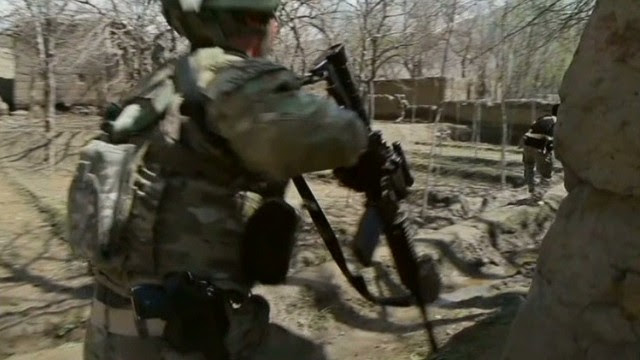 STORY HIGHLIGHTS
Washington (CNN) -- We're not bluffing, the Obama administration told Afghanistan on Tuesday in announcing for the first time it has started planning for the possible withdrawal of all U.S. troops by the end of the year if no security agreement is signed.

Statements by the White House and Defense Secretary Chuck Hagel showed President Barack Obama's impatience with Afghanistan President Hamid Karzai's refusal to sign the agreement that would keep several thousand American troops in the country after combat operations conclude this year.
In a phone call with Karzai on Tuesday to discuss upcoming elections for a new Afghan leader, Obama made clear that time was running out to properly plan for keeping any U.S. forces in the country beyond 2014, the White House said.
Meanwhile, a senior Pakistani official warned that pulling out U.S. troops could have dire consequences, leading to a civil war in Afghanistan.
Obama calling
"President Obama has asked the Pentagon to ensure that it has adequate plans in place to accomplish an orderly withdrawal by the end of the year should the United States not keep any troops in Afghanistan after 2014," said the White House statement.

Hagel: Cuts reflect 'repositioning'
It also noted that a deal remained possible with a new Afghan leader, even if Karzai fails to sign the Bilateral Security Agreement before the April election chooses his successor.
History not repeating itself in Afghanistan
"Should we have a BSA and a willing and committed partner in the Afghan government, a limited post-2014 mission focused on training, advising, and assisting Afghan forces and going after the remnants of core al Qaeda could be in the interests of the United States and Afghanistan," the White House said. "Therefore, we will leave open the possibility of concluding a BSA with Afghanistan later this year."
In his separate statement, Hagel said he strongly supported the order by Obama to "ensure adequate plans are in place to accomplish an orderly withdrawal by the end of the year should the United States not keep any troops in Afghanistan after 2014."
Speaking at Joint Base Langley-Eustis in Virginia Tuesday afternoon, Hagel said the situation in Afghanistan will likely be a top item on the agenda at a NATO ministerial conference in Brussels this week.
Obama, he said, has been very clear that the possibility of U.S. troops staying in Afghanistan depends "on whether we have a bilateral security agreement signed by the Afghani government, to assure our rights of our troops and other important elements that are required any time America has troops in another country."
Pakistani official: Don't do it
A senior Pakistani government official told CNN that a full withdrawal of U.S. troops should not be considered, declaring that "the zero option means civil war in Afghanistan."
Speaking on condition of not being identified, the Pakistani official predicted that 30% of Afghan forces would desert if U.S. forces leave the country.
For the Pentagon, Obama's order means preparing for all contingencies.
"For the first time, the commander in chief has told us to begin planning for a complete withdrawal" from Afghanistan, a senior U.S. official told CNN.
While the option to keep troops there remains, the situation has reached a point where the Pentagon has to begin planning for all possibilities, the official added.
More than 33,000 U.S. troops remain in Afghanistan as the Obama administration winds down the almost 13-year war that began shortly after the September 11, 2001, terrorist attacks.
The security agreement negotiated between Afghanistan and the United States would cover a continuing mission after 2014 focused on training Afghan forces and counterterrorism.
Pentagon: If freed Afghan prisoners return to fight, they're 'legitimate targets'
Afghan presidential contender says he'll sign if elected
While Karzai has balked at signing, a leading contender to succeed him told CNN's Christiane Amanpour this month that the agreement should proceed.
Presidential candidate Abdullah Abdullah said he would sign the deal to keep international forces in Afghanistan, and aid dollars flowing, if elected in April.
Abdullah said Afghanistan will need the financial and military support of the international community "for years to come."
White House spokesman Jay Carney told reporters Tuesday that that longer it takes for security agreement to get signed, the more difficult it will be to properly plan and carry out a U.S. mission after 2014.
Continued delay would result in a smaller and less ambitious mission, Carney said. Asked what happens if no agreement gets signed, he said: "We cannot and will not have U.S. troops on the ground" without a signed deal.
Karzai's not-so-crazy end game
Leading contender for Afghanistan president vows to sign troop agreement if elected
CNN's Jim Sciutto contributed to this report.
end quote from:

Email ThisBlogThis!Share to TwitterShare to FacebookShare to Pinterest
Labels: US planning possible withdrawal of all troops from Afghanistan