ZAATARI REFUGEE CAMP, Jordan
In a section of the camp designated for newcomers, I’m surrounded by about 20 men from the Damascus suburb of Ghouta, elbowing each other for position. The situation quickly degenerates into a geopolitical discussion.
Michael Gerson
Gerson writes about politics, religion, foreign policy and global health and development in a twice-a-week column and on the PostPartisan blog. 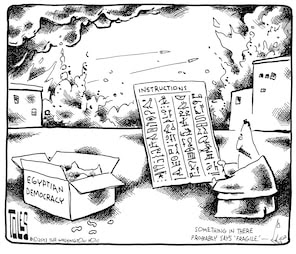 Tom Toles on revolution in the Middle East: Toles’s take on the situation in Libya, Egypt and beyond.
You may also like...

Kathleen Parker
The war on intelligence

“We are not just fighting Assad,” says one man. “We are fighting Russia, Iran and Hezbollah.” Accurate. “The Western countries,” adds another, “are just waiting around.” True enough. Their sympathies are with the more moderate Free Syrian Army, but the radical Islamist group Jabhat al-Nusra “gives us food and assistance.” It is clear who has more resources. The discussion might have taken place at a Washington think tank, except that one man had been in Ghouta in August during the chemical weapons attacks. “I couldn’t get near,” he recalled, “because of all the commotion and screaming. After a while, it was quiet.” After a while, it was quiet.
The Obama administration is reexamining its failed Syria policy. At some point, it becomes hard to play down the worst refugee crisis since Rwanda and a death count approaching that of the Bosnian war . Bashar al-Assad is an utterly committed and murderous opponent. Russia seems unlikely to abandon a strategy that has returned it to the center of Middle Eastern power politics. A variety of radical Islamist groups, including tens of thousands of foreign fighters, contribute to and feed on the chaos.
From a U.S. perspective, this disaster is not just humanitarian but strategic. A Somalia-like future for Syria would be an uncontainable regional and global threat. Lebanon is already being overwhelmed, with one out of four people now a Syrian refugee , adding tension to a combustible sectarian mix. In Jordan, the influx has left public services near the breaking point. Jordanian border guards routinely intercept automatic weapons, hand grenades and bombs with remote detonators coming out of Syria. “Some are headed to sleeper cells in Jordan,” a Jordanian general told me, and “others are in transit to other countries.”
One of the largest challenges related to Syria is strategic despair. It is easy to argue that any given policy change would be inadequate, late or risky.
This has led some to propose a radical option: Tacitly concede defeat, accept that Assad is ascendant and engage him in a counterterrorism strategy. But that would not only reward mass atrocities, it would also be the acceptance of Russian and Iranian strategic dominance in the Middle East and the betrayal of our current friends. And it would reward mass atrocities.
Obama’s alternatives are difficult, but not nonexistent. Additional help to acceptable rebels? This is beginning to happen. Leaders of aid organizations in Jordan report seeing trucks with Saudi aid driving north across the border into Syria each night. The consistent U.S. fear has been that arms and assistance will fall into the wrong hands. But it seems a more urgent problem, as the Zaatari refugees indicated, that radical groups have resources while more moderate forces have little to offer.
Some U.S. officials believe it is possible to identify acceptable rebel groups, particularly in southern Syria, where there are fewer foreign jihadists. And not every Islamist group is favorable to terrorism. The hope is that Syrians, not generally known for religious radicalism, will marginalize religious radicals in a post-Assad government. But first the rebels must survive.
Create humanitarian havens within Syria to relieve refugee pressures on neighboring countries? Again, the Saudis are already moving in this direction, providing tents for encampments in southern Syria. But refugee magnets can easily become targets. Effective havens would require military protection and a flow of supplies — a major, sustained commitment. Yet several regional powers might be persuaded to join an effort similar to the creation of havens during the Bosnian conflict.
Take out the Syrian planes and helicopters? President Obama was once on the verge of aerial strikes — always a grim, final option and a risky escalation. But he might decide that the final option has been reached to stop the barrel bombs from being dropped on neighborhoods and to push back the range of regime attacks to the reach of their artillery.
With Russia blocking any decisive action at the United Nations, any mix of these approaches would require a coalition of the willing. But many nations — including Saudi Arabia, Turkey, Jordan and France — seem to be willing. The United States is not alone; it has simply not led. And a paralyzing fear of unintended consequences, it turns out, can result in massive unintended consequences.

Read more about this topic:
Michael Gerson: Syria’s refugees despair while the world is indifferent
Michael Gerson: Jordan’s wary welcome to its Syrian neighbors
Anne Applebaum: The terror of starvation
Samuel R. Berger: The U.S. must take action to deal with al-Qaeda in Syria
Richard Cohen: Obama’s failure to act on Syria
Stephen Hawking: Syria’s war must end
David Ignatius: Taking a long view on Syria and the Sunni-Shiite divide

repeat partial quote:
The Obama administration is reexamining its failed Syria policy. At some point, it becomes hard to play down the worst refugee crisis since Rwanda and a death count approaching that of the Bosnian war ." end partial quote from above.

If you combine the Rwanda crisis and the Bosnian War (which if you add Somalia to that were the most horrific things going on in the 1990s) (and that was after the Cold War ended.

There really hasn't been anything like what is going on in Syria since the Cold War. You might say that it is a part of the Arab Spring and that might be true. But, Russia and Iran's position have made it another "Cold War Proxy War right out of the 1945 to 1990 old Cold War". Because I have never seen anything like this level of ongoing horror since the Cold War. Yes. I don't think I've seen anything this horrific going on this long since the Viet Nam War. (The Agent Orange sprayed by B-52s on the DMZ still creates kids with 4 legs, or 4 arms or 3 or 4 eyes from the 2-4-D in Agent Orange all these years later still in the DMZ there.)

And for the U.S. the timing couldn't be worse (in other words after fighting almost 14 years in Afghanistan and likely about 10 years in Iraq and spending over 1 trillion dollars on both wars and then partly because of that enduring the Great Recession not only in the U.S. but throughout much of the world as well.

And what was actually accomplished from all those resources of men dying and money from the U.S. and Europe? Not much if you analyze it carefully.

No wonder Europe and the U.S. are having to reconsider their strategies. What we did the last 14 years hasn't worked (including sending in drones with Hellfire missiles). What's next humanized robots? maybe.