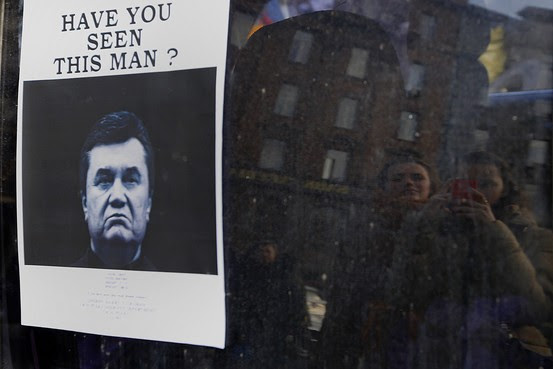 Ukrainians look at a wanted notice for former Ukrainian President Viktor Yanukovych on the window of a car used as barricade near Kiev's Independence Square. Reuters
MOSCOW—Russian Prime Minister Dmitry Medvedev on Monday issued a stern assessment of events in Ukraine, questioning the legitimacy of its nascent government and saying that the turmoil there poses a threat to Russian interests.
Mr. Medvedev's harsh remarks represented the highest-level response to come from Russia since Ukrainian President Viktor Yanukovych was overthrown this weekend and cast doubt on hopeful appeals from the West that Russia play a central role in helping stabilize its crisis-torn neighbor.
"It is not clear to us what is going on in the country and there is a real threat to our interests," Mr. Medvedev told reporters in Sochi, according to a transcript of his remarks posted on the government website.
While Mr. Medvedev said Russia is willing to honor all "legally binding" agreements it made with the previous government, he said Moscow wasn't prepared to deal with masked men carrying guns. 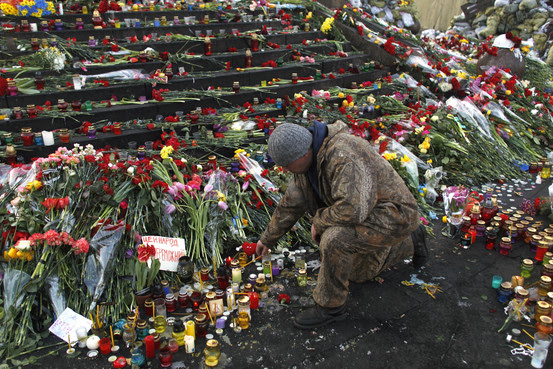 A man placed a candle at a memorial for the people killed in clashes at Independence Square in Kiev, Ukraine, Monday. Associated Press
"Strictly speaking, today there is no one to talk to there. The legitimacy of a whole host of government bodies is raising huge doubts," he said. "If people crossing Kiev in black masks and Kalashnikov rifles are considered a government, it will be difficult for us to work with such a government."
Moscow had stood strongly behind Mr. Yanukovych as he faced increasing unrest that stemmed from his decision in late November to turn his back on a long-sought trade partnership with the European Union in favor of closer economic ties with Russia. Weeks after large-scale protests erupted in central Kiev, Mr. Yanukovych signed a $15 billion bailout commitment with Russia as well as a deal on discounted prices for natural gas.
Ukraine's acting government declared ousted President Viktor Yanukovych a fugitive and said it was opening a criminal case into the "mass murder" of civilians stemming from violent clashes in the capital last week that left dozens dead. Photo: Getty.
As the months passed, the protests gained momentum and came to a head last week when more than 80 people were killed and hundreds wounded in clashes with police. On Friday, Mr. Yanukovych signed a peace agreement with opposition leaders that called for early elections and constitutional reform, but fled the capital with his security forces the following day after many of his loyalists turned their backs on him.
Since then, the streets of Kiev have been quiet, with shops open for business and subway service restored. The armed men Mr. Medvedev mentioned are now nowhere in sight.
Later, Russia's Foreign Ministry issued a statement saying Russia was alarmed by events in Ukraine, and insisted that the international community recognize the deal signed on Friday that would have left Mr. Yanukovych in power until elections in December.
"It is surprising that a number of European politicians have rushed to support the announcement of presidential elections in May, even thought the agreement on Friday says they should only be held after constitutional reform," the statement said.
Calling protesters who clashed with police "militant thugs," the ministry expressed its worry about calls for a ban on Russian language, which is spoken widely in much of the eastern part of the country. The ministry also admonished the destruction of statues of Soviet leader Vladimir Lenin in various western Ukrainian cities.
"Militants have not been disarmed, they refuse to leave the streets, they actually control administrative buildings and the violence continues," the ministry said. "People have embarked on dictatorial and sometimes terrorist methods to suppress dissent in various regions. We have even heard of threats against Orthodox shrines."

Eugene Rumer, director of the Carnegie Endowment for International Peace's Russia program, said he didn't think Mr. Medvedev's or the foreign ministry's comments represented Russia's "definitive" position on Ukraine.
"They are trying to figure out what's happened and how it fits with their long-term interests and how best to keep Ukraine in their orbit," he said. "There has been no definitive statement yet from [President Vladimir] Putin, and until then it is hard to say what Russia's position is."
"Besides, it would be hopelessly counterproductive for Russia to just cut off Ukraine," he added.
Russia's finance minister said Sunday that the $15 billion bailout deal would be put on hold until the situation in Ukraine becomes more clear, but Mr. Medvedev said Russia intends to honor its "legally binding" agreements.
"Those agreements which are legally binding must be honored. We are not cooperating with personalities or isolated individuals. These are interstate relations," he said. "We are neighbors, close nations, and we cannot run away from one another."
"For us, Ukraine remains a serious and important partner," he said.
In addition to the financial aid package, Russia had agreed to supply Ukraine with discounted gas. Mr. Medvedev said his government would honor that and when the agreement expires, would be willing to negotiate a new deal with the new government "if one appears."
Write to Lukas I. Alpert at lukas.alpert@wsj.com
Corrections & Amplifications
Dmitry Medvedev is the Russian prime minister. A previous version of this article described him as the president.
Ukrainians look at a wanted notice for former Ukrainian President Viktor Yanukovych on the window of a car used as barricade near Kiev's Independence Square.
KOB4: White House recognizes Yanukovych not actively Ukraine head
Ukraine's Uncertain Future
Ukraine crisis: Russia steps up Ukraine rhetoric
Viktor Yanukovych
Viktor Yanukovych » Ukraine »

This might not be good news for a free Ukraine separate from Russia.

It's hard to say how all this is going to turn out for Ukraine and the whole world.