However, we were lucky because it's trajectory missed Earth. Had it made a direct hit on Earth we would still be recovering as a world technological society from it and many would likely have died or been injured in navigational technological problems around the world from it. The estimated damage if this had hit earth was in 2013 2.6 Trillion dollars. 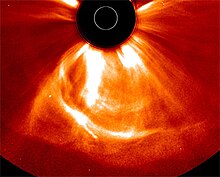 The coronal mass ejection, as photographed by STEREO.

The event occurred in 2012, near the local maximum of sunspots that can be seen in this graph.
The solar storm of 2012 was an unusually large and strong coronal mass ejection (CME) event that occurred on July 23 that year. It missed the Earth with a margin of approximately nine days, as the Earth orbits the Sun, and the Sun revolves around its own axis with a period of about 25 days.[1] The region that produced the outburst was thus not pointed directly towards the Earth at that time. The strength of the eruption was comparable to the 1859 Carrington event that caused damage to electric equipment worldwide, which at that time consisted mostly of telegraph stations.[2]
The eruption tore through Earth's orbit, hitting the STEREO-A spacecraft. The spacecraft is a solar observatory equipped to measure such activity, and because it was far away from the Earth and thus not exposed to the strong electrical currents that can be induced when a CME hits the Earth's magnetosphere,[2] it survived the encounter and provided researchers with valuable data.
Based on the collected data, the eruption consisted of two separate ejections which were able to reach exceptionally high strength as the interplanetary medium around the Sun had been cleared by a smaller CME four days earlier.[2] Had the CME hit the Earth, it is likely that it would have inflicted serious damage to electronic systems on a global scale.[2] A 2013 study estimated that the cost could have reached $2.6 trillion. Ying D. Liu, professor at China’s State Key Laboratory of Space Weather, estimated that the recovery time from such a disaster would have been about four to ten years.[3]
The event occurred at a time of high sunspot activity during Solar cycle 24.

Email ThisBlogThis!Share to TwitterShare to FacebookShare to Pinterest
Labels: The Solar Storm of 2012 was as big as the 1859 one that hit Earth