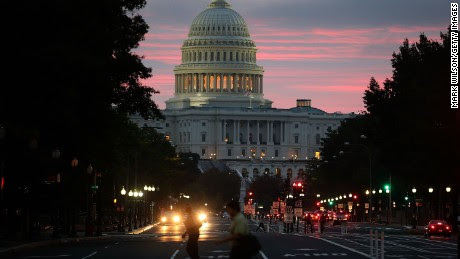 The race for votes on health care is on, once again

LIVE UPDATES: No decision yet on vote, Ryan says

Borger: What an embarrassment

White House on health care bill: 'This is it'

Spicer: This isn't a dictatorship

Reporter to Spicer: Why vote?

Kasich: GOP, Dems not working together is pathetic

Sanders urges Trump to join him on drug bill

Ryan: This is a disappointing day for us

Ryan: Obamacare is the law of the land

Borger: What an embarrassment

White House on health care bill: 'This is it'

Spicer: This isn't a dictatorship

Reporter to Spicer: Why vote?

Kasich: GOP, Dems not working together is pathetic

Sanders urges Trump to join him on drug bill

Ryan: This is a disappointing day for us

Ryan: Obamacare is the law of the land

Washington (CNN)Congressional Democrats are saying they'll oppose a measure to keep the government running another week if Republicans plan a health care vote between now and Saturday, Democratic aides told CNN.
"If Republicans announce their intention to bring their harmful TrumpCare bill to the House Floor tomorrow or Saturday, I will oppose a one-week Continuing Resolution and will advise House Democrats to oppose it as well," the No. 2 Democratic leader in the House, Steny Hoyer, said in a statement.
The battle over a government shutdown appeared to be mostly over, with the push for border wall funding sidelined and Democrats saying President Donald Trump's administration will continue paying for subsidies for low-income Americans as part of Obamacare.
The House Rules‎ Committee passed a rule that allows leaders to bring up legislation at any time between now and Saturday. That rule also allowed Republicans to bring up a vote on health care, though no vote has been scheduled.
House Speaker Paul Ryan said Thursday he was "confident" the government would keep running, but placed any threat of a shutdown on Democrats.
"I would be shocked that they'd (Democrats) want to see a government shutdown," Ryan said during a news conference when asked about Hoyer's comments.
The speaker blamed Democrats for the lack of a deal, saying they were "dragging their feet" and in some cases failed to show up for meetings about the spending bill.
The House expected to vote on the one-week extension on Friday.
Republicans announced late Wednesday night they will move forward with a short-term spending plan that will keep the government open through May 5 and give lawmakers more time to negotiate a longer-term funding package.
At about the same time Hoyer made his threat, Senate Minority Leader Chuck Schumer was on the floor praising the talks and vowing to work to keep the government open.
"There are a few remaining issues to be settled," he said. "But I believe that there we are close to a final agreement. Our side will continue to work in good faith to see that an agreement is reached to keep the government open by tomorrow's deadline."
Also, Sen. John Cornyn of Texas, the Republican whip, said he expected the Senate to pass a one-week funding bill Thursday or Friday, possibly by unanimous consent, meaning a roll call vote would not be required.
The border wall and the health care spending had been two sticking points for congressional and White House negotiators during the past several weeks of discussions to avert a shutdown.
White House officials told Democrats on the Hill Wednesday that the Trump administration will continue making the cost-sharing payments created under Obamacare, multiple sources tell CNN.
As part of the Affordable Care Act, the federal government pays health insurers to reduce the out-of-pocket costs for low-income people trying to pay for health care. These are referred to cost-sharing reduction (CSR) payments. The payments are a major way Democrats ensured low-income people would be covered under the Affordable Care Act, but with a new Republican administration, their future is uncertain.
Democratic House Leader Nancy Pelosi spoke Tuesday with White House budget director Mick Mulvaney, telling him that the payments must be included in the spending bill, according to a senior Democratic aide familiar with the conversation. Mulvaney had indicated that, while the Trump administration had continued the CSR payments, they had not yet decided whether they would make the May payment, according to a source.
Pelosi released a statement following news that the payments would continue.
"Our major concerns in these negotiations have been about funding for the wall and uncertainty about the CSR payments crucial to the stability of the marketplaces under the Affordable Care Act," she said in a statement. "We've now made progress on both of these fronts."
She added, "More progress needs to be made on some of our priorities, and we continue to be concerned about poison pill riders that are still in this legislation."
Mulvaney told CNN's Jake Tapper on Tuesday that Democrats had made their request on Obamacare subsidies too late in the negotiating process.
"They dropped this Obamacare bailout, these insurance company payments, about two weeks ago," Mulvaney said. "These are things they've brought to the table very late."
Insurers are desperate to get some clarity on the issue and make sure the administration continues making the payments.
But, Republicans argued that the payments are part of mandatory spending and therefore shouldn't be part of the negotiations.
Administration officials on Tuesday also highlighted the concession of the border wall of sign of being reasonable and flexible negotiators to avoid a shutdown.
"We just thought that it would be a good first step to get these things that everybody agrees on and take that idea of a government shutdown off the table," Mulvaney told CNN.
White House chief of staff Priebus said Tuesday evening that Trump is "showing some reasonableness on the wall and border security" in an effort to avoid a government shutdown.
"As long as we get a significant amount of border security money for Secretary (John) Kelly to do his job between now and September and continue the conversation on more money for the physical wall itself, it's something that the President made clear he's willing to talk about," Priebus told CNN and reporters from several news organizations.
RELATED: How fight over Obamacare could shut down the government
Over the recess, Republicans and Democrats worked carefully to craft a must-pass spending bill that all parties could agree on and could be signed by the President, but the delicate negotiations have hit a few roadblocks in recent days.
This story has been updated and will be updated as news develops.
CNN's Phil Mattingly, Manu Raju, Gloria Borger, Eli Watkins, Jeff Zeleny and Tami Luhby contributed to this report.
Posted by intuitivefred888 at 9:58 AM