The Golden City heaven or pure land looks a lot like this description and picture of Ketumati Pure land. When I was caught in a blizzard and almost froze to death I saw Golden City Pureland "heaven" attached to Mt. Shasta. I realized then if I froze to death that night in the snow cave because of the blizzard 5 feet of new powder snow coming down and white out that this was where I was to project my soul if I died then in 1970 Christmas Vacation from college. I was 22 then and climbing to Horse camp after dark and we were caught in a blizzard white out and lost our sense of direction with nothing visible anymore so we had to dig a snow cave to survive that night then with our snow shoes to stay alive.

The main difference I saw then was there was something that looked like the Washington Monument and there were domes too when I saw the Golden City. But this painting gives a similar feeling only more Asian or middle Eastern than what I saw on Mt. Shasta. Each heaven you visit is custom to the needs of the people that live there much like when you visit different places here on earth. Everyone does different things because of culture and location and needs and interests of the residents of each heaven.


When I put in Ketumati Pure land of Maitreya I found this gem:
begin quote from:
http://chinabuddhismencyclopedia.com/en/index.php/Ketumati 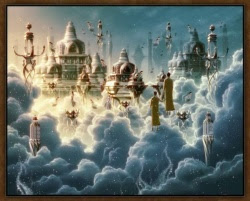 The City Of Wonders
In that city of Ketumati, not a single person will live in a hut made of wood and leaves. Everyone will live in palaces made of the seven types of gems. In all of Jambuudviipa, no one will engage in cultivation, in trade or in any other profession; and no one will suffer from hunger. In suitable places of the earth, a self-generating rice paddy will appear which will bear pearl-like grains with a fragrance but no chaff. When the harvest of one of those plants is taken, sixteen amunus (a measure of volume equal to approximately four bushels) and eight laas (a measure of volume equal to approximately one bushel) will remain after two thousand two hundred and seventy-two carts have been loaded! When this rice is cooked in a golden bowl on a hearth of gems on a fire arising from jotirasa (gems), everyone will consume it with tasty meats and other curries. When people feel the need to relieve themselves, a blue cloud will rush up to them and provide a cover. Instantly, a pit will appear in the ground. When they have answered nature's call, the pit will disappear and a pond of water will take its place. When they have washed in that pond, the cloud will disappear. Thus the city of Ketumati will be like a heaven. As it has been said:
There will be a glorious city called Ketumatii inhabited by very rich people where there will be beautiful houses, pandals and gates which will shine like a heavenly city.