The following true factoid sort of got me thinking in this direction:

For those of you who recently read this I'm changing it after researching the facts online. Here is a good source:

Men who use mobile phones face increased risk of infertility

It appears that cellphones have reduced fertility by about 29% in England. This could also be true in all developed countries that use cellphones or be similar in percentages of lost fertility in men. The problem is actually beyond this, however. Because it isn't just a loss of fertility cell phones may also be causing genetic damage in the remaining sperm which could also result in genetic abnormalities in babies that actually get born. With 1 Billion cell phones in use on earth right now this might be a very important thing for developed civilizations to think about. Because we may all be un-creating future healthy generations right now  through cell phone usage so we might not have good replacements for ourselves or good people to care for us all when we get old.

So, as I thought more about this I started to think about what other depopulation factors are in place. Then I thought of the food, oil, global climate change vicious cycle, which goes something like this.

First bad and unpredictable weather makes it harder to grow crops at low prices. In other words the weather is starting to make it impossible for enough food to be grown to feed 100% of the people of earth. If you combine this with oil not easily obtained anymore, you are starting to see the last few years two things happen. First, the food becomes scarcer worldwide so the prices rise as a result. Then in places where there are non-democratic governments where people have no say so like in the middle east, since people under 30 can't get jobs to buy enough food to eat, they demonstrate and riot until those governments fall. Since most of these middle eastern countries are composed of over 50% under age 30 people you have a serious problem that extends from Northern Africa all the way to China.  And as more governments collapse other people in other countries say, "Hey. They collapsed their corrupt government maybe we can collapse ours too!" So then more starving young people (since they are starving without a future anyway) die in the streets as a last ditch effort to get rights, jobs and enough food to eat which is something for them to be proud of. However, as the world watches this drives oil prices higher because of middle eastern instability as the world watches half happy and half horrified by all this as the violence comes closer and closer to Saudi Arabia. Because those educated enough know that if Saudi Arabia goes (the government goes), the whole world economy likely will soon collapse because Saudi Arabia pumps more oil than anyone on earth. So even though most of the world considers the Saudi Government composed of nepotism

graph regarding world nepotism and corruption from wikipedia: 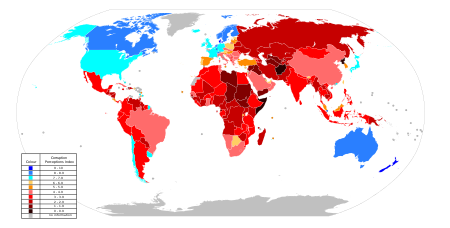 Overview of the index of perception of corruption, 2010.

Since 1995, Transparency International (TI) has published an annual Corruption Perceptions Index (CPI)[1] ordering the countries of the world according to "the degree to which corruption is perceived to exist among public officials and politicians".[2] The organization defines corruption as "the abuse of entrusted power for private gain".[3]
The 2003 poll covered 133 countries; the 2007 survey, 180. A higher score means less (perceived) corruption. The results show seven out of every ten countries (and nine out of every ten developing countries) with an index of fewer than 5 points out of 10. end quote from wikipedia under the heading
"nepotism" and then click on graph to right. So the way to read the above graph is that countries that are dark blue in color have the least amount of ingrained corruption and you can read the rest of it from there. The brown or dark red is the highest in corruption of nations internally.

The following continues from before above graph.
and some consider that system corrupt, they still don't want to see the whole world economic system and transportation of food system on earth collapse which is what would happen if the Saudi Arabian Government collapses now. So, if you think we have problems now it will get 10 to 100 times worse if Saudi Arabia goes into rioting and revolution like all the other states in the middle east have or likely will.

So, if you weren't worried before maybe you are now. Because if the Saudi Arabian Government goes most countries will be reduced to using whatever oil or energy their countries normally have as natural resources like oil, natural gas, wind, water, and growable fuels because at that point Gasoline and diesel would be $10 to $20 a gallon(or more) even in the United States which might mean you could only buy locally grown food at that point because the cost would be beyond the reach of almost anyone for any food grown outside your county here in the U.S.

In other parts of the world food riots would grow and do a whole lot more than collapse governments worldwide. If you want to know what actually happens just study the history of different countries of what happens when famines are out of control anywhere over the centuries. So, even though the world wants middle eastern democracies so people have rights, jobs and food, anyone realistic knows this doesn't happen overnight. Even here in the U.S. we are still perfecting the balance every day so as many people as possible can have a good life. But in other countries where governments are often as corrupt as they were thousands of years ago they might not have enough time to build the institutions to actually create the democracies in order to have the jobs to buy the food to prevent the food riots and worse. So, this is the problem worldwide that I foresee potentially at this point.
Posted by intuitivefred888 at 11:29 PM

Email ThisBlogThis!Share to TwitterShare to FacebookShare to Pinterest
Labels: The Depopulation Factor