Childhood of the wife of the last Tsar of Russia

What I found interesting about all this is she is the Grand Daughter of Queen Victoria of England because her mother, Alice was Queen Victoria's second child? So, even though Alix Grew up in Germany and her mother and youngest sister died of Diptheria in 1878 she and her remaining siblings grew up after visiting their Grandmother in 1878 and she (Alix) grew up to be married off to the Tsar of Russia. This is a really amazing true story. 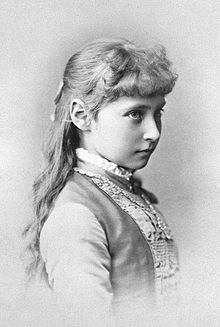 Princess Alix of Hesse, age 11
Alexandra was born on 6 June 1872 at the New Palace in Darmstadt as Her Grand Ducal Highness Princess Alix Viktoria Helena Luise Beatrice of Hesse and by Rhine,[1][2] a Grand Duchy that was then part of the German Empire. She was the sixth child and fourth daughter among the seven children of Louis IV, Grand Duke of Hesse and by Rhine and his first wife Princess Alice of the United Kingdom, the second daughter of Queen Victoria and Albert, the Prince Consort.
Alix was baptised on 1 July 1872 (her parent's tenth wedding anniversary) according to the rites of the Lutheran Church and given the names of her mother and each of her mother's four sisters, some of which were transliterated into German. Her godparents were the Prince and Princess of Wales, the Tsesarevich and Tsesarevna of Russia, Princess Beatrice of the United Kingdom, The Duchess of Cambridge, and Princess Anna of Prussia. Her mother gave her the nickname of "Sunny," a practice later picked up by her husband, while her British relatives gave her the nicknames of "Alicky" in order to distinguish her from her aunt-by-marriage, the Princess of Wales (and later Queen of the United Kingdom), who, while having the given name Alexandra, was known within the family as Alix.[3] Alix's hemophiliac older brother Prince Friedrich of Hesse and by Rhine ("Frittie") died in May 1873 after a fall when Alix was barely a year old.
In November 1878, diphtheria swept through the Grand Ducal House of Hesse; Alix, her three sisters, her brother Ernst ("Ernie"), and their father fell ill. Elisabeth ("Ella"), Alix's older sister, had been sent to visit her paternal grandmother, and thus escaped the outbreak. Alix's mother Alice tended to the children herself, rather than abandon them to doctors. Alice herself soon fell ill and died on the 17th anniversary of her father's death, 14 December 1878, when Alix was only six years old. Alix, Victoria, Irene, and Ernst survived the epidemic, but their youngest sister, Princess Marie ("May"), did not.
Alix and her surviving siblings grew close to their British cousins, spending holidays with Queen Victoria. With her sister Princess Irene, Alix was a bridesmaid at the 1885 wedding of her godmother and maternal aunt, Princess Beatrice to Prince Henry of Battenberg.[4] She was also present at her grandmother's Golden Jubilee celebrations in 1887.
Posted by intuitivefred888 at 11:41 PM

Email ThisBlogThis!Share to TwitterShare to FacebookShare to Pinterest
Labels: Childhood of the wife of the last Tsar of Russia