US
begin quote from:
Flooding, severe weather devastate Texas
A man, foreground, checks to make sure everyone made it safely out of a truck that flooded when the three men in the background drove around a closed road barrier and lost control of the … 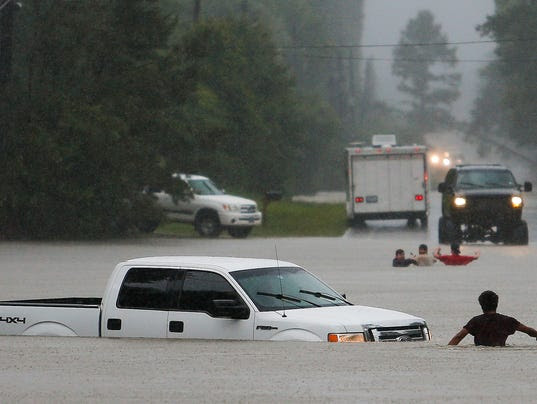 (Photo: Michael Ciaglo, AP)
Six people died and at least two others were missing Sunday after heavy rains in Texas and Kansas caused severe flooding. In one case near Austin, which received nine inches of rain this week, a vehicle with two people was swept off a flooded roadway.
Threats of floods prompted authorities to evacuate thousands of prisoners near Houston, and inmates in another prison on Saturday fought with correctional officers after flooding caused a power outage. 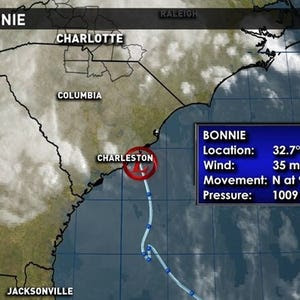 USA TODAY
Bonnie drenches Carolinas; I-95 shut down
Most of the deaths took place in rural Washington County, Texas, between Austin and Houston, where more than 16.5 inches of rain fell in some places late last week, the Associated Press reported. The bodies of two other missing motorists were found Saturday in separate parts of the county, authorities said.

story from Honda
Watch the fastest seat in sports 360
NBC News reported that one of the victims, 64-year-old Lela Holland, died Friday when floods washed through her home, according to the Washington County Sheriff's Office. Most of the other victims died when their vehicles were overtaken by high water, according to police, including:
Two people in Travis County, Texas, were swept away in floodwaters Friday, County Emergency Services spokeswoman Lisa Block told NBC News. A witness reported that one person was holding onto a pole and was ripped away by the waters, while firefighters saw another person get swept away in a vehicle, Block said.
In hard-hit Houston, rising rivers and creeks prompted Harris County officials on Saturday to ask about 750 families in the Northwood Pines subdivision to voluntarily evacuate the Houston Chronicle reported. 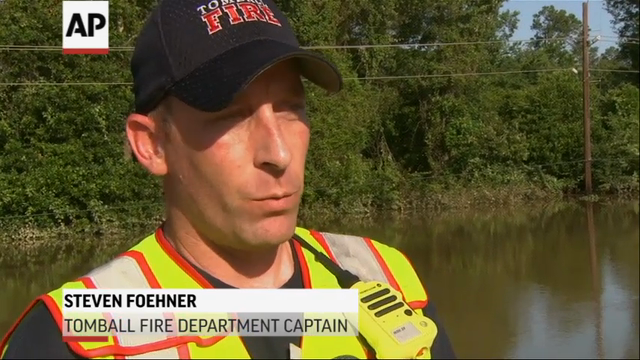 Residents of Tomball, Texas were rescued by officials via boat on Saturday, after days of flooding left many roads filled with water. (May 28) AP
North of Houston, officials warned residents living near the west fork of the San Jacinto River that rising waters were likely to flood homes, even those that are elevated.
"The skies are clear and things look good. But we want to make sure people understand that we are not out of the woods yet. We have to keep an eye on water that's coming through our bayou system," said Francisco Sanchez, a spokesman for the Office of Emergency Management in Harris County. 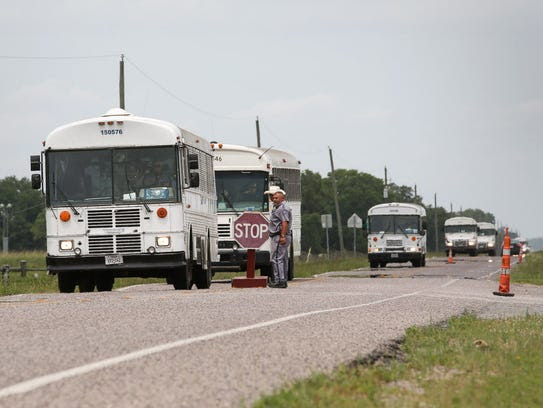 Texas Department of Criminal Justice prisoners are evacuated from the Terrell and Stringfellow Units May 29, 2016, in Rosharon, Texas. (Photo: Jon Shapley, AP)
Northwest of Houston, students at Decker Prairie Elementary School in Pinehurst, Texas, had to spend the night after being stranded on campus because of flooding. Families were reunited Saturday afternoon, the Chronicle reported.
Southwest of Houston, Fort Bend County officials warned of possible record-setting floods on Tuesday, calling the event a "potential 100-year flood." Homes as far as four miles away from the swollen Brazos River are threatened, officials said. Memorial Day events were canceled as 20 inches of rain fell north of the river.
Rainfall was expected to "obliterate" a 1994 record in Simonton, Texas, where officials issued a mandatory evacuation order.
Near Austin in Travis County, Texas, searchers looking for two missing people whose vehicle was swept off a flooded roadway found a body, NBC reported, but it wasn't immediately clear if it was one of the two.
In the latest incident, a woman died when the car in which she was riding was swept from the street by the flooded Cypress Creek about 1:30 a.m. Sunday in Comfort, Texas, about 45 miles north of San Antonio.
Kendall County sheriff's Cpl. Reid Daly told NBC that the car had three occupants. The driver made it to safety and a  female passenger was rescued from a tree. But the body of 23-year-old Florida Molima was found around 11 a.m. Sunday, about eight miles downstream, Daly said.
Near Fort Worth, authorities were searching Sunday for a 10-year-old boy who fell into the Brazos River while fishing with friends. Officials told WFAA-TV that the river would typically be roughly three feet deep but is now about 13 feet deep.
In Kansas, the search for a missing 11-year-old boy resumed Sunday morning and expanded beyond the swollen creek he fell into Friday night, according to Wichita Fire Department battalion chief Scott Brown.
Authorities at two prisons near Houston were moving an estimated 2,600 inmates, fearing that the rain-swollen Brazos River could flood. Inmates at the Terrell and Stringfellow Units in Rosharon, about 30 miles south of Houston, were being moved to other prisons with available space. Texas Department of Criminal Justice spokesman Jason Clark said inmates at a security camp nearby were being moved to the main prison building.
Clark said as many as 50 inmates at another prison northwest of Houston were involved on Saturday in a fight between inmates and correctional officers after flooding caused a power outage.
Follow Greg Toppo on Twitter: @gtoppo
Posted by intuitivefred888 at 1:58 AM