Future of US relationship with UN in doubt

Future of US relationship with UN in doubt

How will Trump deal with China?

What's next for US and Russia?

Donald Trump on Mexico: Then and Now

How will Trump deal with China?

What's next for US and Russia?

Donald Trump on Mexico: Then and Now

Stewart Patrick is the senior fellow and director of the program on International Institutions and Global Governance at the Council on Foreign Relations. The views expressed in this commentary are his.
(CNN)Among the many foreign policy uncertainties created by Donald Trump's election, there is one prediction we can take to the bank: The United Nations is going to get hammered. An unapologetic nationalist is bound for the White House, Republicans are in control of both houses of Congress—and the world body is in their crosshairs.
Last week's Security Council vote to condemn Israeli settlements in the West Bank—a resolution on which the Obama administration controversially abstained—has enraged GOP legislators. The President-elect has also lashed out, tweeting, "The United Nations has such great potential. But right now it is just a club for people to get together, talk and have a good time. Sad!" Secretary of State John Kerry tried today to defend US diplomacy at the UN, but Republicans on Capitol Hill are determined to pass legislation condemning the Council.

Stewart Patrick
The US-UN relationship is fraught in the best of times -- during the George W. Bush administration when the US imposed a unilateral vision globally, or during the 1990s, when Sen. Jesse Helms bedeviled the United Nations and created a financial crisis at the institution by withholding US dues. Conservative critics, both in and outside government, regularly scapegoat the UN for the failures of its member states. And because it lacks a domestic constituency, it is an irresistible target for nationalist demagogues.
After eight years of the most multilaterally-inclined US administration in history, the United Nations is in for a shock. Donald Trump is the new sheriff in town. Where President Obama proclaimed himself a "citizen of the world," Trump is channeling a populist base deeply skeptical of international organizations, where paranoid fantasies about UN "black helicopters" as a threat to American sovereignty run deep.
John Kerry: Two-state solution in 'serious jeopardy'
The international organization is certainly flawed and often exasperating—but it is the best vehicle the United States has for advancing its agenda in the world and sharing the burden with others.
By rare coincidence, the quadrennial transition to a new US administration occurs just as a new UN secretary-general takes up his five-year term. (The only previous time was in 1953, when Dag Hammarskjold took up his position as secretary-general shortly after Eisenhower took office). Into this unpromising setting walks Antonio Guterres, who on January 1 will become the UN's ninth secretary-general. Guterres is an accomplished and dynamic leader. But he will be hard pressed to ward off US assaults on the global organization.
As a candidate, Trump embraced a slew of unilateralist, nationalist and often immoral positions that put him on a collision course with the United Nations. These included promising to walk away from the Paris climate accord, rip up the nuclear deal with Iran, deny admission of refugees, reinstate torture and violate international humanitarian law in combating terrorism. Though Trump has since walked back on some of these pledges, his unpredictability makes it impossible to know whether he will again reverse course. 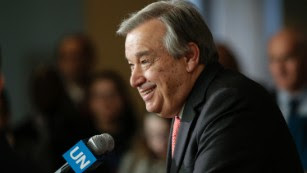 Antonio Guterres Fast Facts
Compounding the UN's predicament, longstanding critics in the House and Senate are determined to bring it to heel. One is US Rep. Ileana Ros-Lehtinen (R-FL), chair of the House Foreign Affairs Committee, who has repeatedly introduced legislation to fundamentally alter US funding for the United Nations, so that US contributions to the UN's budget are no longer automatically assessed (and legally binding) but purely "voluntary." This would be disastrous for the UN, as other UN member states would inevitably follow suit. But it has long been a daydream of UN critics and was recently endorsed by former US envoy John Bolton, mentioned as a possible senior official in the Trump administration.
Guterres is in many respects an ideal selection to fend off the negative impact of a unilaterally-inclined US administration and a micromanaging Congress. He is a former prime minister of Portugal, a US NATO ally, but also enjoys solid backing from both Russia and China. His long tenure as UN High Commissioner for Refugees will be indispensable at a time when the world has more people displaced by violence than at any time in history. Significantly, Guterres was chosen in a (relatively) open process that included unprecedented interviews by all candidates before the UN General Assembly. 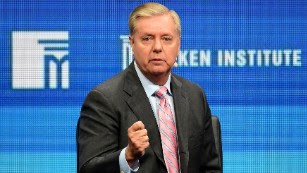 Lindsey Graham: Defund UN after Israeli settlement vote
But he will need to walk a tightrope. On the one hand, he must assure American skeptics that he will wisely steward US taxpayer dollars, as well as advance the internal reform agenda left hanging by his predecessor, Ban Ki-Moon, who made little headway in overhauling the UN's dysfunctional management practices. On the other, he cannot afford to alienate other member states by seeming to be America's lackey. Striking this balance will be tough.
His first step should be to launch quiet consultations both with the President-elect and members of Congress. Trump's inner circle—including Nikki Haley, his envisioned UN envoy—is entirely devoid of diplomatic experience. Guterres needs to deliver a pragmatic message to them: Regardless of the international organization's many flaws, the United States will return again and again to the United Nations—just as it did under George W. Bush—to get things done.
This message could resonate with Donald Trump. The President-elect clearly seeks a future in which the United States does less and others do more. The United Nations—where the United States gets a dollar of effort for every quarter it puts in—can help others share the burden. More specifically, if President Trump and Vladimir Putin manage to negotiate a deal on Syria, they will need the UN to bless it—and assist with its implementation.
Follow CNN Opinion
Join us on Twitter and Facebook
The past quarter century shows how easy it is for a UN secretary-general to run afoul of Washington. The Clinton administration denied a second term to Boutros Boutros Ghali, while his successor Kofi Annan parted sharply from George W. Bush over the war in Iraq. Guterres is a forceful personality, and he will be drawn to the secretary-general's role as the voice of humanity's moral conscience. But he would be wise to remember that American presidents prefer their secretaries-general to be (as the saying goes) more secretary than general. This will be particularly true of the incoming occupant of the White House, who already has enough generals of his own.
Posted by intuitivefred888 at 9:09 AM

Email ThisBlogThis!Share to TwitterShare to FacebookShare to Pinterest
Labels: Future of US relationship with UN in doubt