USA Today Network Linh Ta, The Des Moines Register 12:09 a.m. ET Jan. 26, 2017
FacebookTwitterGoogle+LinkedIn
Photos: Pipeline leak in northern Iowa
Fullscreen
Crews work to clean up after a pipeline leak in Worth County, Iowa, on Wednesday, Jan. 25, 2017. According to the Worth County Sheriff's Office, approximately 82,000 gallons of diesel fuel has leaked near a farm north of Hanlontown, near the Minnesota border.  Bryon Houlgrave/The Register 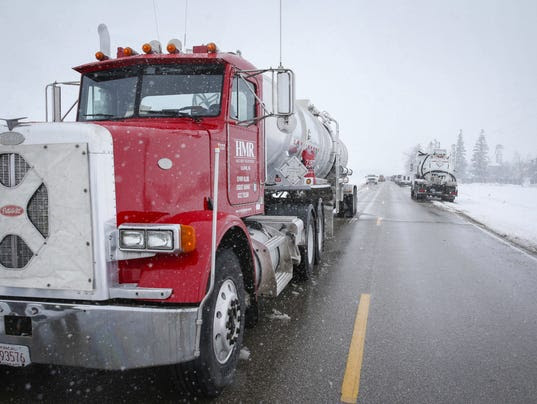 (Photo: Bryon Houlgrave/The Register)
DES MOINES — An investigation is ongoing on how a pipeline leaked 138,600 gallons of diesel fuel in Worth County early Wednesday morning, according to Magellan Midstream Partners L.P., the pipeline company.
The 3,300 barrels of diesel leaked out of Magellan's 12-inch pipeline system near Hanlontown around 390th Street and Wheelerwood Road, said Bruce Heine, spokesman for Magellan. A portion of Wheelerwood Road will be closed for two days, according to the Worth County Sheriff's Office.
"It’s a big one — it’s significant," said Jeff Vansteenburg, a field office supervisor for the Iowa Department of Natural Resources. "The responsible party is Magellan, so they’ll have to bear the cost of cleanup."

Dakota Access, Keystone XL oil pipelines: A look at what's next
The pipeline leaked on private agricultural land, said Karen Grimes, spokeswoman for the Iowa DNR. There is a small stream near the leak, but Grimes said no surface water has been contaminated. The Iowa DNR has not uncovered any underground water contamination.
The leak occurred when the pipeline ruptured and diesel sprayed out, Grimes said. Magellan reported the leak around 8 a.m. It was initially reported that 63,000 gallons leaked out, Grimes said.
"They found that it’s basically pooled into a farm field that’s near the break and has not reached the water in the state," Grimes said. "There’s a little creek, but it has not reached any surface waters at this time."
Heine said it's unknown what caused the leak. Vansteenburg said nothing struck the pipe and said there are sensors in the pipeline that notify Magellan when a problem occurs.
Since the leak, the pipeline has been contained, Heine said.  No evacuations or injuries have been reported and there is no public health risk, according to the Worth County Sheriff's Office. Officials from the Environmental Protection Agency and the Iowa Department of Natural Resources responded to the scene.
Gas stations typically have a diesel-fuel tank underground that can hold between 10,000 to 15,000 gallons, Vansteenburg said. He said enough diesel spilled in Worth County to supply around 10 stations.

Dakota Access, Keystone XL: 2 pipelines, 2 flash points
"The product is under pressure, so as soon as a leak develops, it starts coming out pretty fast," Vansteenburg said.
The last significant pipeline leak that occurred in the state was in 2001 when a pipeline owned by the Koch Pipeline Co. leaked 312,000 pounds of fertilizer near Algona, Vansteenburg said. More than a million fish, turtles, frogs and other aquatic life were killed from the incident, according to Register archives.
Magellan has been responsive to the leak, Vansteenburg said. He said the company brought vacuum and frack trucks to handle the diesel, which will be brought to the company's terminal in Clear Lake. Once all of the free-liquid diesel is recovered, he said the company will remove the contaminated soil.
Vansteenburg said the Iowa DNR will also see if any Iowa Administrative Codes were violated.
​ Magellan’s pipeline system transports refined petroleum products from refineries in the Gulf Coast and midcontinent to petroleum distribution terminals throughout the Midwest, Heine said.
On Oct. 20, a Magellan pipeline holding anyhdrous ammonia leaked near Decatur, Neb., according to an article by the Omaha World-Herald. The paper reports that one person was killed due to the leak, while 40 other people were evacuated.
Follow Linh Ta on Twitter: @linhmaita

After President Trump signed memorandums to move forward on the Dakota Access and Keystone XL pipelines, activists met at the White House. Video provided by Newsy Newslook
Posted by intuitivefred888 at 9:40 PM

Email ThisBlogThis!Share to TwitterShare to FacebookShare to Pinterest
Labels: 000 gallons of diesel in Iowa, Pipeline leaks 138