Since there are 400 sanctuary cities so created to protect both citizens and non-citizens from murders, rapes and various other crimes, Sanctuary cities are not going to give up being sanctuary cities simply because this would result in hundreds or even thousands of murders and other mayhem. Trump has no idea at all what he is really talking about anyway. He demonstrated that with his order ban against the 7 middle Eastern Countries. Not one person has died in the U.S. from any terrorist from any of these countries by the way but they have died from 9-11 from people from Saudi Arabia which if you notice is not on the list. 3,000 people died from Saudi Arabian terrorists on 9-11. So, it's all a joke by and  for the ignorant and already 90,000 people have suffered from Trump's  Order. 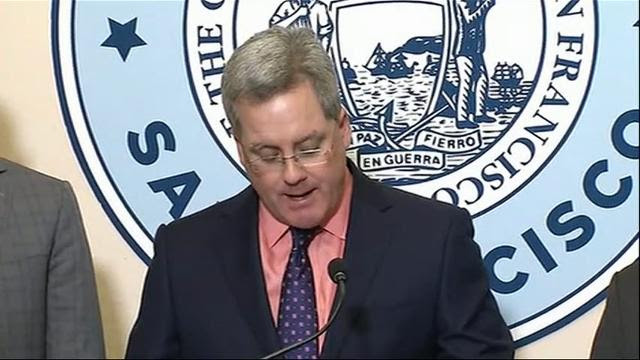 The San Francisco City Attorney has sued President Trump, claiming an executive order over sanctuary cities is unconstitutional and calling it a severe invasion of San Francisco's sovereignty. (Jan. 31) AP 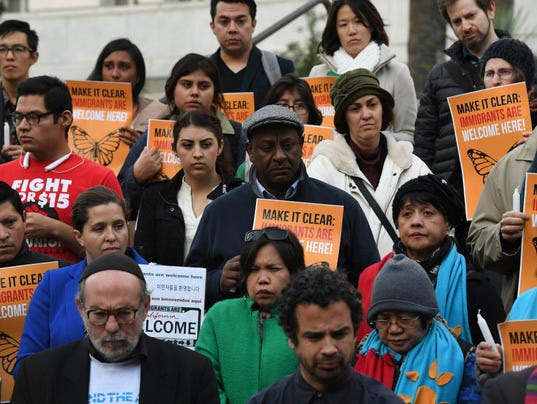 (Photo: MARK RALSTON, AFP/Getty Images)
The city of San Francisco filed a lawsuit Tuesday challenging President Trump's executive order that directs the federal government to withhold money from so-called sanctuary cities that limit cooperation with federal immigration enforcement agents.
The lawsuit, filed by San Francisco City Attorney Dennis Herrera in U.S. District Court in Northern California, marks the first court challenge over the sanctuary order filed by one of the targeted cities since Trump unveiled his order last week.
“The president’s executive order is not only unconstitutional, it’s un-American,” Herrera said. “That is why we must stand up and oppose it. We are a nation of immigrants and a land of laws. We must be the ‘guardians of our democracy’ that President Obama urged us all to be in his farewell address.”
White House officials did not immediately respond to a request for comment on the lawsuit.
The term "sanctuary city" is a broad term that describes hundreds of communities around the U.S. that have adopted policies protecting the nation's 11 million undocumented immigrants from deportation.
San Francisco’s administrative code prohibits city officials and agencies from assisting federal agents trying to determine the immigration status of an individual, and does not allow police to detain an individual in local law enforcement custody solely on the basis of a civil immigration detainer request from federal authorities. The city first dubbed itself a sanctuary city in 1989 after thousands of refugees migrated to California in the midst of civil wars in Central America.

Big city mayors vow to defy Trump on sanctuary cities order
Big city mayors in Chicago, New York, San Francisco and elsewhere across the U.S. vowed to defy Trump on the order after he signed it.
Both San Francisco Mayor Ed Lee and New York City’s Bill de Blasio predicted that the order would not hold up if challenged in court. San Francisco receives more than $1.2 billion a year in federal funding, most of which goes to health care, nutrition and other safety net programs. About 30,000 undocumented immigrants live in the city, according to San Francisco officials.
Trump vowed throughout the campaign to crack down on those cities. He often cited the example of Kate Steinle, a San Francisco woman who was shot and killed by an undocumented immigrant who had been released by local law enforcement.
Lee said that the city began preparing for a possible lawsuit soon after Trump was elected in November.
"The misguided executive order makes our cities less safe, and we believe, is unconstitutional," Lee said. "If President Trump is truly invested in making America safer, then it is imperative that the new administration and Congress pass comprehensive immigration reform.

First 'sanctuary city' caves to Trump demands
“This lawsuit is not a step I take lightly,” said Herrera, who argues that the order defies the principle of federalism as laid out in the Constitution . “But it is one that is necessary to defend the people of this city, this state and this country from the wild overreach of a president whose words and actions have thus far shown little respect for our Constitution or the rule of law.”
In a related development, Democrats in California's General Assembly advanced a bill Tuesday that would provide statewide sanctuary for immigrants by restricting local law enforcement from cooperating with federal immigration authorities, the Associated Press reports. The Senate Public Safety Committee bill was approve 5-2 along party lines.
.Contributing: Alan Gomez in Miami
Follow USA TODAY Chicago
Posted by intuitivefred888 at 5:13 PM