Hope Hicks' totally ridiculous explanation for why she quit

Hope Hicks specialty is public Relations. Public relations really has no connection with truth at all. It's about communicating things you want people to think or feel. But, mostly public relations has no basis in truth anywhere in anyone's life.
begin quote from:
Hope Hicks' totally
ridiculous
explanation for why
she quit
CNN.com

Hope Hicks' totally ridiculous explanation for why she quit

Van Jones: Things are exactly as they appear

Trump Jr. says he talked to Hope Hicks about meeting

Who is Hope Hicks?

Who's GQ's most powerful person in Washington?

Van Jones: Things are exactly as they appear

Trump Jr. says he talked to Hope Hicks about meeting

Who is Hope Hicks?

Who's GQ's most powerful person in Washington?

(CNN)Here's how Hope Hicks explained her decision to resign as White House communications director, according to The New York Times' Maggie Haberman, who broke the story:
"She told colleagues that she had accomplished what she felt she could with a job that made her one of the most powerful people in Washington, and that there would never be a perfect moment to leave."
Ahem. Cough. Throat clear. Nervous looking around. Collar tug. Cough.
So, no.
Whatever the opposite of the perfect time to leave the White House is -- the "imperfect time"? -- this is it.
Hicks is not only the third Trump White House communications director to resign in just over a year, but she also leaves:
* One day after she spent hours testifying in front of the House Intelligence Committee regarding its investigation into Russia's attempted meddling in the 2016 presidential election. In that testimony, Hicks acknowledged that she sometimes told white lies for Trump but insisted that she had never done so in regard to the Russia investigation.
* Amid a security clearance crisis that caused White House staff secretary Rob Porter's resignation. Porter, who was romantically involved with Hicks, stands accused of domestic abuse by both of his ex-wives. Those allegations, which Porter denied, had kept him from gaining a permanent security clearance. Which meant that Porter was operating with an interim clearance, despite handling oodles of top secret and classified information in his role as staff secretary. But, wait, there's more! Hicks was deeply involved in the crafting of chief of staff John Kelly's initial defense of Porter, despite her romantic ties to the now-former aide.
* As tensions between Trump's immediate family -- Ivanka Trump and Jared Kushner, in particular -- and Kelly boil over. The downgrading of Kushner's security clearance by Kelly hamstrings the first son-in-law, whose portfolio includes negotiating Middle East peace and managing the US's relationship with China (among many, many other things).
* On the same day the President resumed his ad hominem smear campaign against his own attorney general and one day after CNN reported that special counsel Robert Mueller is taking a look at Trump's finances in the run-up to his decision to run for president. 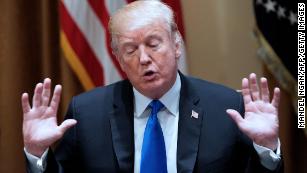 16 insane things that happened in Trumpworld in just the last 48 hours
Hicks' departure is another major negative story amid that laundry list. Whatever you thought of her credentials to be the head of the White House's communications operation -- Hicks had little practical experience in dealing with the media -- there is no debate that she was one of the few aides who Trump trusted totally.
Hicks had been part of the original Trump campaign staff alongside the likes of Corey Lewandowski and Dan Scavino. She was with Trump before anyone even thought he had a chance. She believed in him when everyone else was laughing at him. And that sort of loyalty goes a very, very long way with Trump.
"I don't think it's possible to overstate the significance and just the importance of her role within the White House," one Trump ally told CNN's Jeremy Diamond. "She's an invaluable team member and one of the originals."
Remember that Trump tends to view the world in very stark terms: those who are loyal to him (very few people) and those who are out to get him (everyone else). Hicks was very much in the former category.
"She is as smart and thoughtful as they come, a truly great person," Trump said of Hicks in a statement released by the White House.
Simply put: This is a White House in crisis. Hicks' departure adds to that sense that the sky is falling around and on Trump. There's no spin to put out that. You can't polish a turd. And when you try to, it tends to get all over the place.
Posted by intuitivefred888 at 7:36 PM

Email ThisBlogThis!Share to TwitterShare to FacebookShare to Pinterest
Labels: Hope Hicks' totally ridiculous explanation for why she quit