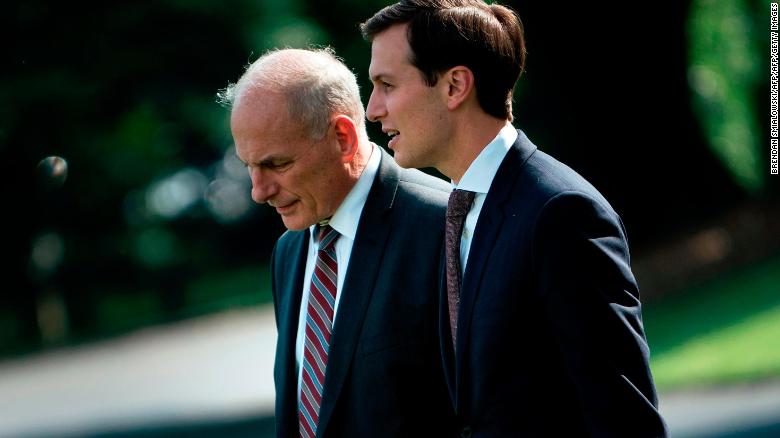 Senior Adviser Jared Kushner, at right, and White House Chief of Staff John Kelly follow US President Donald Trump to Marine One on the South Lawn of the White House in August. (AFP PHOTO / Brendan Smialowski)
(CNN)President Donald Trump said Friday he will not make the decision on whether to let Jared Kushner, his son-in-law, keep his temporary security clearance, telling reporters at the White House that he will let chief of staff John Kelly make the decision.
"That will be up to General Kelly. General Kelly respects Jared a lot and General Kelly will make that call," Trump said at a news conference. "I won't make that call. I will let the general, who is right here, make that call. Jared is doing some very important things for our country. He gets paid zero."
Kushner has been unable to obtain a full security clearance in part because of special counsel Robert Mueller's investigation, two sources familiar with the matter told CNN earlier this week. Kushner is unlikely to obtain the full clearance as long as the special counsel's probe is ongoing, one of the sources said.
Trump slammed the background check system, calling it a "broken system."
"It shouldn't talk this long," Trump said.
Trump opened his answer Friday by lauding Kushner.
"Well, Jared has done an outstanding job, I think he has been treated very unfairly," Trump said. "He works for nothing."
CNN's Shimon Prokupecz, Jeremy Diamond and Dana Bash contributed to this report.
Posted by intuitivefred888 at 1:24 PM