end quote from:http://www.bbc.co.uk/news/science-environment-17611404
If at the end of the last Ice Age earth was at 260 parts per million of CO2 in the atmosphere and now we are at 392 this doesn't bode well for the ice caps sticking around much longer. So, what happens when the Ice Caps are gone not just during the hot times for each pole (hot time for north pole is summer and hot time for south pole is winter)? What happens when the ice is gone from the north and South poles completely sometime in the next 100 to 200 years. At that point, do we move underground to avoid the winds and the heat most places on earth? Or do we simply move closer to both poles so we have better climates. Maybe the answer is that some people will be doing both things.

Here is the  article that I quoted from at the top of the page:
begin quote: 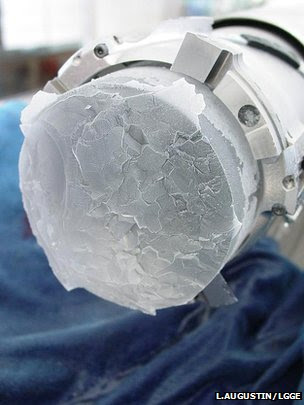 A new, detailed record of past climate change provides compelling evidence that the last ice age was ended by a rise in temperature driven by an increase in atmospheric carbon dioxide.
The finding is based on a very broad range of data, including even the shells of ancient tiny ocean animals.
A paper describing the research appears in this week's edition of Nature.
The team behind the study says its work further strengthens ideas about global warming.
"At the end of the last ice age, CO2 rose from about 180 parts per million (ppm) in the atmosphere to about 260; and today we're at 392," explained lead author Dr Jeremy Shakun.
"So, in the last 100 years we've gone up about 100 ppm - about the same as at the end of the last ice age, which I think puts it into perspective because it's not a small amount. Rising CO2 at the end of the ice age had a huge effect on global climate."
The study covers the period in Earth history from roughly 20,000 to 10,000 years ago.
This was the time when the planet was emerging from its last deep chill, when the great ice sheets known to cover parts of the Northern Hemisphere were in retreat.
The key result from the new study is that it shows the carbon dioxide rise during this major transition ran slightly ahead of increases in global temperature.
This runs contrary to the record obtained solely from the analysis of Antarctic ice cores which had indicated the opposite - that temperature elevation in the southern polar region actually preceded (or at least ran concurrent to) the climb in CO2.
This observation has frequently been used by some people who are sceptical of global warming to challenge its scientific underpinnings; to claim that the warming link between the atmospheric gas and global temperature is grossly overstated.

But Dr Shakun and colleagues argue that the Antarctic temperature record is just that - a record of what was happening only on the White Continent.
By contrast, their new climate history encompasses data from all around the world to provide a much fuller picture of what was happening on a global scale.
This data incorporates additional information contained in ices drilled from Greenland, and in sediments drilled from the ocean floor and from continental lakes.
These provide a range of indicators. Air bubbles trapped in ice, for example, will record the past CO2 concentrations in the atmosphere. Past temperatures can also be inferred from ancient planktonic marine organisms buried in the sediments. That is because the amount of magnesium they would include in their calcite skeletons and shells was dependent on the warmth of the water in which they swam.
"Our global temperature looks a lot like the pattern of rising CO2 at the end of the ice age, but the interesting part in particular is that unlike with these Antarctic ice core records, the temperature lags a bit behind the CO2," said Dr Shakun, who conducted much of the research at Oregon State University but who is now affiliated to Harvard and Columbia universities.
"You put these two points together - the correlation of global temperature and CO2, and the fact that temperature lags behind the CO2 - and it really leaves you thinking that CO2 was the big driver of global warming at the end of the ice age," he told BBC News.
Dr Shakun's team has now constructed a narrative to explain both what was happening on Antarctica and what was happening globally:
Prof Eric Wolff from the British Antarctic Survey was the chief scientist on the longest Antarctic ice core, which was drilled at Dome Concordia in 2001/2002. This core records eight ice ages, not just the most recent, stretching back some 800,000 years.
He was not involved in the Nature study. Prof Wolff told this week's Science In Action programme on the BBC World Service:
"It looks as though whatever kicked off this whole sequence of events to get out of the ice age was something really, in global terms, rather minor and regional, and yet it led to a sequence of events that led to a complete change in the way the surface of the Earth looked, with ice sheets disappearing.
"So, that just reminds us that although climate might seem quite steady to us because it's been relatively steady for the last few thousand years, it is actually capable of undergoing big changes. And as one famous palaeoclimatologist put it: 'we poke it at our peril'."
Jonathan.Amos-INTERNET@bbc.co.uk and follow me on Twitter


More on This Story

Email ThisBlogThis!Share to TwitterShare to FacebookShare to Pinterest
Labels: CO2 higher now than at the end of the Last Ice Age