Himalaya community longs for a road 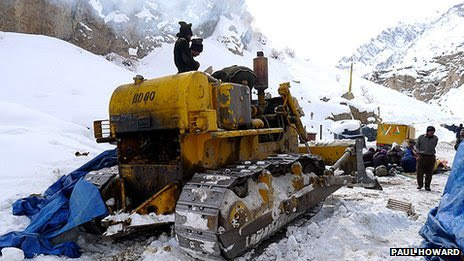 The remote Himalayan region of Zanskar is cut off from the rest of the world by snow for more than half the year but the gradual progress of a new road will eventually give the community a permanent connection.
The sight of the frozen river disappearing into the Stygian gloom of the gorge ahead made me pause.
"Never walk on the ice" - my mother's 35-year-old warnings about the perils of frozen ponds rang loud in my ears.
Noticing my hesitation, my friend Tanzin - who lived in London but whose home and family were the other side of this imposing obstacle and were the reason for our journey - chided me gently and demonstrated just how solid the ice was by skating nonchalantly.
He was right. It was too late to back out now.
We had travelled halfway round the world to spend the next five days walking through the frozen Zanskar river gorge high in the Indian Himalayas.
Any qualms I felt should have been long resolved. 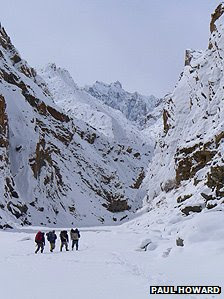 Months of isolation each year make life extremely difficult for local people
In this respect I was lucky. Those, like Tanzin, who come from the remote Buddhist region of Zanskar, do not have the luxury of choice.
Trapped behind 6,000-metre-high (20,000 ft) peaks, the high passes that provide summer access to Zanskar are blocked by snow for seven months of each year, leaving Zanskar completely isolated.
The only exception is in the early months of the year, when the plummeting temperatures (-30°C is not uncommon) allow the Zanskar river to freeze and the pathless gorge to be negotiated. If you do not mind walking on the ice, that is.
It was time to take the plunge - though only metaphorically, I hoped.
I stepped forward. The ice held.
This ought not to have been a surprise. As well as safely supporting my myself and Tanzin, the frozen Zanskar river has supported traders and pilgrims for nearly 1,000 years.
Once a tributary of the famous Silk Route, the Chadar (the name given to the journey through the Zanskar river gorge) is essential to life in Zanskar.
Without it, permanent habitation would not have been possible. 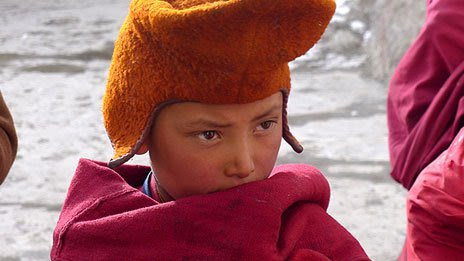 Yet the fate of the Chadar - even that of Zanskar itself - is now uncertain.
Change began with the arrival, in the 1980s, of tourists looking for that elusive combination of adventure and a "genuine" cultural experience.
As we made our way through the gorge, the majority of those we encountered were either trekkers or their guides, cooks and porters.


From Our Own Correspondent

There were no longer monks taking yak butter to sell in neighbouring Ladakh, or returning with copper pans from the appropriately named village of Chilling at the head of the gorge.
Far more significant, however, was the road workers' camp we passed on our arrival in Zanskar proper, and not just because the Indian army officer in charge was so drunk he could no longer recall where (or even what) the satellite phone was that we hoped to use to call for a jeep to collect us.
The camp marked the current extent of the new road that is being blasted through the river gorge and that will, once finished, provide Zanskar with its first permanent connection with the outside world.
Exactly how long it will take to complete is uncertain. Construction started more than 10 years ago and there is still a lot of hard work to be done.

The exact impact of the changes it will bring is similarly unclear.
What is clear is that Zanskar, for now at least, is still defined by its isolated past - the careful husbanding of scarce resources that has allowed people to live in such a hostile environment for a millennia, and the continued observance of cultural and religious traditions now proscribed in Chinese-controlled Tibet, that has prompted the Dalai Lama to say Zanskar is vital to the future of Tibetan Buddhism as a whole.
What was also clear - I discovered while spending a week enjoying noodle stews and potent, home-brewed chang with Tanzin's family - was the local desire for the road to be completed as soon as possible.
The concerns I expressed about the loss of traditions like the Chadar in an increasingly homogenised world cut little ice (if you will excuse the pun) with those for whom a round trip to the shops, or the hospital, is such a perilous 10-day trek. 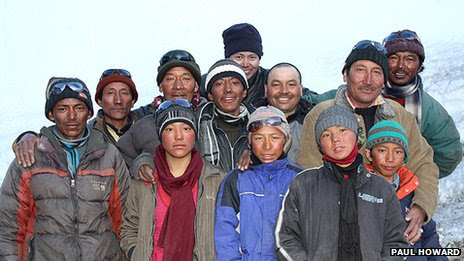 Doing the school run is not easy for local families
The reasons for this enthusiasm were reinforced as we took to the ice again for our return journey.
It was not the challenging Chadar that upset the cheerful group of parents and schoolchildren we met tackling the world's most arduous school run. Snow, ice and sub-zero temperatures are facts of life for Zanskaris.
It was the eight or 12 months away from home that resulted from Zanskar's continuing isolation that saw stoicism give way to sadness.
My own concerns about the wisdom of choosing to walk on the ice of the Zanskar river now seemed considerably less important.

How to listen to From Our Own Correspondent:
BBC Radio 4: A 30-minute programme on Saturdays, 11:30 BST.
Second 30-minute programme on Thursdays, 11:00 BST (some weeks only).
Listen online or download the podcast
BBC World Service:
Hear daily 10-minute editions Monday to Friday, repeated through the day, also available to listen online.
http://www.bbc.co.uk/news/magazine-17762117

This article reminds me of the many Himalayan faces I met and saw while trekking in February, 1986 in the Helambu region of Nepal. The people who live in the mountains in these areas are mostly Tibetan Buddhist and Sherpa who live at the higher altitudes both in Nepal and India(at least as far as I was able to see). There are also local tribes in various remote locations also. However, since that time there has been more building of roads and helicopter landing pads and short runways for tourists so they don't get injured or die so much while trekking in the Himalayas. And this also to some degree benefits the more wealthy of locals who also can afford to use Helicopters, short take off and landing aircraft and roads where they can be built where they won't wash away or crumble away from steep terrain and downpours of water during the rainy season. It also helps rescue more people so they don't die so much of things  they  ordinarily wouldn't die of if they had transportation to hospitals far away.

In 1985 and 1986 when I went to get my Himalayan Trekking permit there were photos of dead westerners as they were found with captions of how they died remotely in the Himalayas there on the wall of the Nepalese government Trekking permit Center there in Katmandu. For example, broken toe(died from infection because they couldn't walk). Died from exposure(not enough clothes or knowledge of how cold it could get). Died from Broken ankle. Died from getting lost without a guide etc. When I traveled and trekked in the Himalayas there was no one to rescue you. If you had a problem that you couldn't handle while trekking likely you would die unless you had enough money to hire someone to carry you out while they were piggybacking you across many suspension bridges some thousands of feet high above gorges while they blew back and forth in the wind. I watched them carry a local woman out to a clinic across a high suspension bridge at about 10,000 feet elevation and at that time 25 miles from the nearest road that ANYTHING could actually drive on with a vehicle. I don't know if she lived or not or whether she actually made it to the clinic.

I hear today all this has changed a lot with high altitude helicopters and short take off and landing aircraft with short landing strips in the remote back country for hikers and climbers and snowboarders and skiers in the Himalayan regions of India and Nepal.

I also spent time in 1986 (about a month and a half) in Dharamshala and Rewalsar (Tsopema) which are both in the Himachal Pradesh state of India. Dharamshala is a mountain top city that is from 5600 feet high to about 5900 feet high and surrounded by 20,000 foot peaks of the Himalayas.  I think Rewalsar is around 5000 feet high and about 5 to 6 hours away from Dharamshala by Bus. I took a train from Patna, I believe near Bogh Gaya to Varanasi (Benares) and then to the Taj Mahal (Agra) and then on to New Delhi and then went by train and finally bus from New Delhi to Dharamshala, Himachal Pradesh, India and then to Rewalsar, India. Then we took trains and buses back to Kathmandu and spent one month in  the Bodhanath region of Kathmandu and trekked in the Himalayas before we returned by plane from Kathmandu through Bangkok and Tokyo  to San Francisco, California by late April 1986

I found this youtube of a train ride from Patna to Varanasi, India

A lot has changed since 1986 when I was last there in February. Mcleodganj is one of the sections of Dharamshala the mountain top city. If you look to the left the mountain goes down quite a ways to the left of the road in the above youtube video.