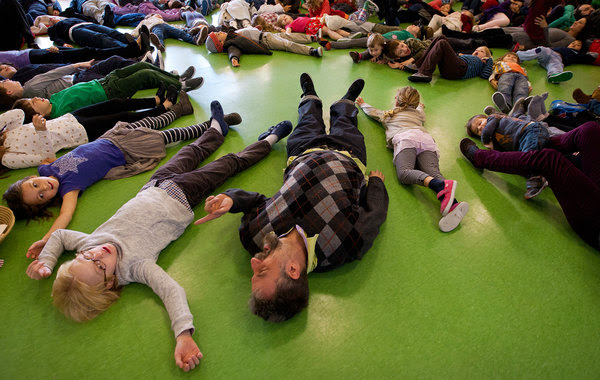 LAST month, two kindergarten classes at the Blue School were hard at work doing what many kindergartners do: drawing. One group pursued a variation on the self-portrait. “That’s me thinking about my brain,” one 5-year-old-girl said of her picture. Down the hall, children with oil pastels in hand were illustrating their emotions, mapping where they started and where they ended. For one girl, sadness ended at home with a yummy drink and her teddy bear.

REFLECTION David Kelly, director of curriculum at the Blue School, meets weekly with the kindergarten teachers.
Grappling so directly with thoughts and emotions may seem odd for such young brains, but it is part of the DNA of the Blue School, a downtown Manhattan private school that began six years ago as a play group. From the beginning, the founders wanted to incorporate scientific research about childhood development into the classroom. Having rapidly grown to more than 200 students in preschool through third grade, the school has become a kind of national laboratory for integrating cognitive neuroscience and cutting-edge educational theory into curriculum, professional development and school design.
“Schools were not applying this new neurological science out there to how we teach children,” said Lindsey Russo, whose unusual title, director of curriculum documentation and research, hints at how seriously the Blue School takes this mission. “Our aim is to take those research tools and adapt them to what we do in the school.”
So young children at the Blue School learn about what has been called “the amygdala hijack” — what happens to their brains when they flip out. Teachers try to get children into a “toward state,” in which they are open to new ideas. Periods of reflection are built into the day for students and teachers alike, because reflection helps executive function — the ability to process information in an orderly way, focus on tasks and exhibit self-control. Last year, the curriculum guide was amended to include the term “meta-cognition”: the ability to think about thinking.
“Having language for these mental experiences gives children more chances to regulate their emotions,” said David Rock, who is a member of the Blue School’s board and a founder of NeuroLeadership Institute, a global research group dedicated to understanding the brain science of leadership.
That language is then filtered through a 6-year-old’s brain.
Miles, one of the kindergartners drawing their emotions, showed off his picture and described the battle it depicted between happiness and anger this way: “The happy fights angry, but angry gets blocked by the force field and can’t get out.” Happiness could escape through his mouth, Miles explained. But anger got trapped, turning into sadness.
With ample research showing that negative emotions impede learning while positive emotions broaden children’s attention and their ability to acquire and retain information, strategies for regulating emotions are getting more emphasis in progressive schools across the country.
“The science of learning is something teachers are paying more and more attention to,” said Mariale Hardiman, director of the Neuro-Education Initiative at the Johns Hopkins University School of Education. She was not familiar with the Blue School but said she would endorse any school trying to integrate academic and emotional education.
“We can no longer think that the two systems are separate,” Dr. Hardiman said, “and that children should leave their emotions at the door.”
For all the attention brain science is receiving in schools, experts say it is too soon to know whether its application will lead to improved academic outcomes. And some researchers say that while they embrace new ideas — especially around self-control — they personally prefer a more traditional approach to pedagogy.
“The older approach has led to some very good outcomes,” said Sam Wang, an associate professor of molecular biology and neuroscience at Princeton University and co-author of “Welcome to Your Child’s Brain,” a child development primer for parents.
But the Blue School clearly has its appeal. This year, it had eight applications for each spot in its program for 3-year-olds, making it a typically hypercompetitive Manhattan private school. Tuition for students in kindergarten through third grade is $31,910 a year.
Next Page »

end quote from:
http://www.nytimes.com/2012/04/15/nyregion/at-the-blue-school-kindergarten-curriculum-includes-neurology.html
I think it is possible, depending upon how people teach these new ideas that good outcomes could result. I think that one of the problems with education has always been the criteria for how outcomes are judged. When public education came into the mainstream schools were designed around how to make obedient factory workers during the early industrial revolution. Whereas in today's fast moving world I would like to see schools more designed around how to make entrepreneurs simply because entrepreneurs tend to be much more adaptable to the kinds of changes society will likely be going through this century. I think it likely that the age of extreme specialization is mostly over except for the few doctors, Nurses, Lawyers and a few other professions. However, most people will have to reinvent themselves multiple times within their lifetimes. It is said that the average person will have (at least) 5 different careers in their lifetime so being able to reinvent yourself and your life has become a necessity for everyone. And even if your first career is to be a baseball player or a rock musician it is fairly certain for about 99% of the people that they are going to have to have 4 or more careers after that to survive to old age.
Posted by intuitivefred888 at 5:24 AM

Email ThisBlogThis!Share to TwitterShare to FacebookShare to Pinterest
Labels: Education as Brain Science