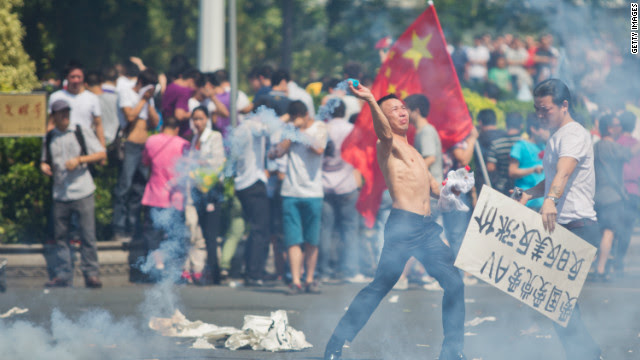 The credit ratings of Japanese auto and technology manufacturers could come under pressure "if the clash between China and Japan over the Senkaku/Diaoyu islands escalates and is prolonged," Fitch Ratings Agency warned in a note on Tuesday.
"A number of Japanese companies, including Panasonic, have temporarily suspended production at some of their Chinese facilities as anti-Japanese demonstrations demanding a boycott of their products flared across 85 cities in China at the weekend."
Nissan, Mazda, Honda and Toyota suspended operations at some of their Chinese automotive plants, as have electronics makers Canon and Panasonic.

Tensions rise between Japan and China
Nearly 200 7-11 stores in Beijing and Chengdu, owned by Japanese company Seven & I Holdings, as well as 13 Ito Yokado supermarkets will be closed through Wednesday "to maintain the safety of employees," company spokesperson Katsuhiko Shimizu said.
Fears are high that demonstrations Tuesday -- the anniversary of Japan's 1931 invasion of China -- may repeat scenes of violence which saw a Panasonic factory lit on fire, Japanese restaurants and department stores ransacked and Japanese cars smashed and overturned. Meanwhile, a Japanese Coast Guard official told CNN Tuesday that a Chinese fisheries patrol boat has entered the disputed waters and a Japanese vessel will attempt to warn the ship away.
Tensions in the dispute, a perennial source of nationalistic anger on both sides of the East China Sea, rose on September 10 after Japanese government agreed to buy the uninhabited islands from its private Japanese owners. China claims historical ownership of the island chain, while Tokyo maintains it has been in Japanese hands since 1895. The islands — known as the Senkakus in Japan and Diaoyu in China -- were administered by the U.S. occupation force after World War II. But in 1972, Washington returned them to Japan as part of its withdrawal from Okinawa.
The islands sit among popular fishing waters and are also believed to be rich in oil resources. Ownership of the chain would allow exclusive commercial rights in the seas surrounding the islands.
China's fishing moratorium in the East China Sea ended on Sunday, raising concern that as more Chinese trawlers enter the area, so raises the likelihood of conflict. China's Ministry of Agriculture issued a statement saying the "surrounding waters of Diaoyu Island and its affiliated islets are traditional fishing grounds for generations of Chinese fishermen," Beijing's CNTV reported Monday.
Last Friday, China's state-run agency reported that six Chinese maritime surveillance ships entered the island chain and began patrols and "law enforcement," China's state-run news agency Xinhua reported.
Sales of Japanese car brands in China were down 2% compared to a year ago, China Association of Automobile Manufacturers said last week. Meanwhile, sales of foreign brands from Germany, the U.S., South Korea and France were up 25%, 19%, 12% and 4% respectively.
CNN's Junko Ogura in Tokyo contributed to this story